between here and there

In 1918 director Fred J. Balshofer shot a US World War I propaganda film titled Over the Rhine starring the popular transvestite star of the day, Julian Eltinge. But before it was even in the can Armistice was declared and the film was of little worth, particularly since it also featured two then unknown actors, Virginia Rappe and Rudolph Valentino. Seeking to salvage the useless film, Balshofer recut it and released it in 1920 as The Adventuress, which was a complete failure at the box office.

In 1921 his unknown actor, Valentino starred in the major box office sensations The Four Horsemen of the Apocalypse and The Sheik, two of the most popular films of his entire career.

In the very same year Rappe, while partying at Roscoe “Fatty” Arbuckle’s suite at the St. Francis Hotel in San Francisco suffered what was described as “trauma,” over the next days dying of a ruptured bladder and peritonitis. Rumor had it that her condition was the result of a violent sexual assault by Arbuckle for which he was arrested and tried—eventually three times—on charges of manslaughter, for which he was finally acquitted.

Balshofer now perceived a way to recoup his loses by recutting his film yet again and splicing in new and repeated images of Valentino in a re-doctored scenario crafted by Paul M. Bryan along with some of the original intertitles by Thomas J. Geraghty. 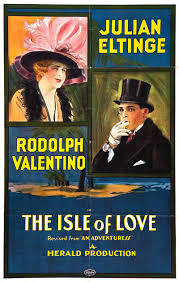 The result is one of the most preposterous and, as Time Out has described it “loopy” films Hollywood ever produced. So outrageous is The Isle of Love that I’m surprised that some eager entrepreneur hasn’t restored the raw cut, added a musical score, and promoted to become a campy cult classic.

The plot now revolves around an island “of love” where evidently the women gather along the beaches in one-piece swimming suits, dancing among themselves as nymphs pretending to perform some imaginary version of a dance on which Ruth St. Denis might have collaborated with an improvisatory work by Isadora Duncan while lacking their style and grace. At moments the cinematographer focuses on a woman silhouetted against the darkness of a cave which hints at nudity, but for the most part, these clumsy hoofing “beauties” seem mostly to be enjoying the company of their fellow sisters—hinting perhaps of lesbian ecstasies except when they are being ogled at and chased by the scrawny ruler of the Isle, “Pom Pom” Al Faffa (Charles Millfield) or the local Grand Duke Nebo (Stanton Beck) and his collaborator Prince Halbere (Leo White), who together are evidently plotting the overthrow of His Majesty, who spends all of his days and nights on the beach, often half-buried in sand.

The cornball intertitles, written as if they were meant to be in-between feature comic travelogues of a 1940s or 50s, try their best to create a sense of heterosexual prurience:

According to the maps it’s [the Isle] neither here nor

there...it’s halfway between. But...WHAT A SPOT!

MEN....Use both eyes and hang on to your seats!

The women gather together laughing and playing with what seem to be balloons while a taller member of their tribe, evidently the silhouetted figure we first saw, dives from a cliff into the waters below, the intertitles continuing,

Sorry to hang the blinders on you so soon,

fellows, but we must get back in time to welcome

the boys home from college.

So we are illogically returned to the US, where the college boys drop off Cliff (Eltinge), a repatriate who lovingly embraces his mother and his fiancée Eunice for both of whom he has obviously longed throughout the war.

Will Cliff please immediately fly over to the isle (a good way to use the numerous biplane scenes from the original war film), writes Dick, and help in overthrowing both the silly Al Faffa, his son, Prince Halbere and the Grand Duke?

How could he resist, despite the tears of his mother and Eunice, the latter of whom gives him a small flag he had carried with him in his wartime adventures to remind him of home.

To describe this film’s absurd narrative further might lead any sane reader to wonder about my mental condition, so I want to assure all beforehand that I’m not making this up. Upon Cliff’s arrival the “old friends” quickly attempt to plot the downfall of the evil trio, determining to have Dick take care of the Prince while Cliff will entice the Duke, explicably dressed in drag—somehow leading to their being overthrown.

In order to trap the Prince, Cliff invites another of his dear friends, the wealthy Jacques (Valentino, represented in the credits as R. De Valentina) to join them, and he too jumps into a biplane and speeds off to the isle, in his case because he has left behind, apparently on a previous visit, the woman he loves, Vanette (Rappe).

When Cliff tells Jacques of his plans to seduce the Duke in drag, he jokes: “So when you see me, don’t sheik me,” a new verbal form of the word which obviously refers to the possibility of being grabbed up and carried away into the night which the Italian-born beauty had memorably enacted in The Sheik.

They all join up at a local nightclub, where Vanette easily entrances the Prince by diving, fully clothed into a small pool located near the club’s dance floor to retrieve a pearl ring he offers her. Meanwhile Cliff, dressed rather convincingly as the American beauty Julie, catches the eye of Nebo, who invites her to his mansion the next day. 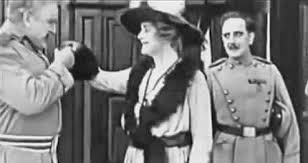 That next afternoon Julie further intrigues the Duke my agreeing to meet him in her one-piece swimming suit on the Isles infamous beach. She’ll be wearing striped stockings, she teases him. The Grand Duke can barely wait to bed his beauty in the sand seeking out the striped stockings, which, when he finds them peeking out behind a bush, he begins to tickle before his leap—until he discovers the legs belong to none other than Al Faffa.

Julie/Cliff never shows up at the Isle’s renowned tourist spot, but in her next meeting with Nebo, she does take the Grand Duke for a motor ride with Dick at the wheel. Together the men manage to beat up their rider, whose car eventually crashes over a cliff somewhere near Malibu.

Nebo’s men, on the chase after Julie and Dick, nonetheless finally capture Julie, now sans wig playing the manly Cliff, and arrest him, sentencing the insurgent, soon after, to death by a firing squad.

Never fear, Jacques and a whole US air force squadron come to his rescue, bombing the scene of his execution, allowing Cliff/Julie to escape and return to the to America, where, boating with Eunice in his own manorial pond in Brentwood, he finds eternal happiness. 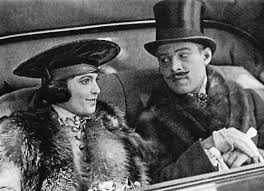 The would-be king Jacques, in the meantime, tells Vanette that even without a kingdom, she will always be his queen, as the Vaseline-haired, pink powder-puffed hero—as racist homophobes of the day soon after described the Latin actor and dancer Valentino—absconds with his woman, this time in a touring car whose destination remains a mystery.

Despite all of this strange film’s attempts to portray a heroic heterosexual adventure, it remains, as the Isle in which the action takes place, firmly intrenched in between “here and there,” queer and square.

Posted by greenintegerblog at 5:51 AM