a drug without a name

The short 14 minute premiere film, Back Room. is an odd one for Spanish director Guillem Morales, who went on the direct mostly heterosexually-based psychological, mystery, and horror-related tales such as Upside Down (2002), The Uninvited Guest (2004), and Julia’s Eyes (2010).

Back Room takes us into a world that few other than gay men might have even imagined existed, the back room (actually upstairs in the instance) of a gay club in Barcelona where men seek out public sex with one another. Certainly, LGBTQ films have many times visualized the gay bar experience where men attempt to get chosen or to choose someone with whom to go home or elsewhere to have sex. One of the most memorable views of that world was revealed in Ron Peck’s Nighthawks of 1978, while bathroom sex was briefly depicted as early as 1971 in James Bidgood’s romanticized portrait of it in Pink Narcissus and more extensively and brutally in Frank Ripploh’s Taxi to the Toilets (1981). But few films have actually taken their audiences into the maze of, in this case raw concrete walls, against which seemingly disinterested yet desperately desiring boys and men lean in anticipation of the right sex partner.

What isn’t openly expressed is that the process is so exceedingly difficult simply because of the wide range of desires each of these males have: while some want sexy younger boys; others look for brutal-looking older or middle-aged men. Some desire leather, others seek the school-boy or collegiate types. If some wait to be sucked off, others seek out  the opportunity to perform fellatio. Some want to be fucked, others want to do the fucking. Some are turned off by any kind of small talk, others seek verbal communication. Some, as this film suggests, live under the illusion of finding anybody in this hellish environment who might join them outside for a longer relationship; others imagine killing of their temporary lover and leaving the body behind. No one wants an old queen unless he happens to participate in a secondary manner while they are having sex with someone else. A bit like an American supermarket, the choices are so diverse they appear to be limitless. The list of desires goes on so indefinitely that it is almost a miracle when two men actually meet up to perform the sexual act. 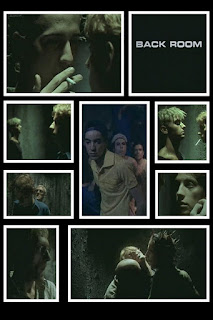 The two major figures of this scene are a young boy, perhaps a neophyte to the place, Iván (Juan Jaimez) and nerdy, not particularly good-looking but friendly older boy, Álex (Oriol Serra). Through a voice-over of their inner thoughts, we know that both young men are leery of even being where they are, and are constantly considering their exit, uneasy with their surroundings and uncertain about protocol. Both attempt to imagine opening phrases, the standard for even heterosexuals, “You gotta light?” and “It’s hot isn’t it?” Apparently these introduction courtesies aren’t well received by the locals. Showing too much passion, as we observe, is a turn-off to many, particularly when Álex attempts to kiss and lick the earlobes of a slightly older leather-like figure, who appears to be more attracted to the new kid, Iván.

At one point, when he is about to leave but is drawn back into the maze of halls by his hopes of finding some sexual satisfaction, Iván meets up with a handsome black man with peroxided-spiked hair, who literally accosts him, shoving his hand into the good-looking boy’s pants while kissing him. A moment later he has pulled down Iván’s pants while an older unattractive queen, whom others have previously rejected, begins to rub across the boy’s backside. It continues for a few moments until the leather number, who Iván believes looks like his acquaintance Hector, passes by, breaking up the group, the newcomer somewhat happily escaping their clutches.

Again Iván contemplates leaving, given some little sense of competence by his short encounter, yet fearing what else might lie ahead. Álex, similarly checking out the halls one more time, determines to depart. But this time, when he encounters the school-boy, his ploy of asking for a light works, as Iván takes out a book of matches and strikes one to light ’s Álex’s cigarette.

The two briefly begin to fondle one another before Iván makes clear that he would enjoy being fucked. Putting on a condom, Álex turns the boy around and proceeds, with others watching. If there is something slightly titillating about this, it quickly loses most of its sexual allure in the almost programmatic way the act occurs, as if, instead being an intimate encounter between two men, it were a kind of performance. The narrow darkened stage of the “back room,” we realize, wipes away any visual sexual excitement for the would-be voyeur, permitting pleasure only for those actually engaged in the act.

When they are finished, both contemplate the possibility of continuing their encounter outside of this lurid place with the potential of a possible friendship. But for slightly different reasons and simply because of their awkwardness, both, Álex in particular, pass up the opportunity. We suddenly comprehend that this is not the way to meet a lover, not the way even to meet a friend. Anyone met in the “back room” is simply another vessel of sexual release, a thing not a human being to take home to wake up to in broad daylight.

And yet, for all of the raw sensationalism of the place, a kind of innocence exists in the heart of nearly all who enter: a hope of finding not just someone for release, but someone who might offer the ineffable “other” whom each of them seeks. And it is also, in some cases, a strange kind of school for learning. As Iván turns to leave we hear his inner relief that the sexual act in which he just participated didn’t hurt as much as he expected, confirming what he first suspected. This is his very first time of engaging in anal intercourse.

Finally, anyone who has entered similar winding, twisting rough-hewn halls senses the smell not only of sweat and semen but an odd perfume of a drug without a name that will draw the Álexes, Iváns, Victors, Miguels, Julios, and Isaacs back night after night to get their fix.

This is not a film for everyone, particularly the meek or sanctimonious, for this is the territory of Jean Genet, not that sweet, happy gay and lesbian couple residing down the street.

Posted by greenintegerblog at 8:40 AM