Ever since reading Charles Dickens’ Oliver Twist in my junior year of college, I have always felt that Oliver’s entrance into Fagin’s den is very close to an immersion into  queer life. Of course, in this rowdy and violent world of “prigs” (thieves) life is very queer, “odd and peculiar,” in the more traditional meaning of that word. But it is also a homosexual world and, with Fagin playing the role of the titular “den daddy” to the boys within the darkened and decaying structure—not so very different from James Whale’s Old Dark House—it is most definitely a pedophilic paradise wherein Fagin’s epithets of “my dear” “my pet,” and “my lovely” mean something far more than ironic niceties bantered in an attempt to keep the boys close to home. If Fagin’s nearly salivating endearments are ironic (and they are), they also are contextualized within an inverted society that Dickens deeply sexualizes.

The Jew grinned; and, making a low obeisance to Oliver, took him by the hand, and hoped he should have the honour of his intimate acquaintance. Upon this, the young gentleman with the pipes came round him, and shook both his hands very hard—especially the one in which he held his little bundle. One young gentleman was very anxious to hang up his cap for him; and another was so obliging as to put his hands in his pockets, in order that, as he was very tired, he might not have the trouble of emptying them, himself, when he went to bed. These civilities would probably be extended much farther, but for a liberal exercise of the Jew’s toasting-fork on the heads and shoulders of the affectionate youths who offered them.

On the surface, obviously, beyond their apparently friendly greetings, Oliver is being properly shaken down by the pick-pocketing youths who are checking out his pockets and traveling pack for anything of value, with Fagin attempting to keep them in order by knocking them over their noggins with his toasting fork.

And that’s just one scene among many throughout the novel.

This extended aside only serves the purpose of arguing that the very first film containing cinematic representations of Dickens’ novel, J. Stuart Blackton’s Oliver Twist of 1909, is not as innocent with regard to queer sexuality as it first might appear.

Blackton’s 14-minute version does not attempt to tell the full story of the fiction, but assuming its early 20th century audiences have read the popular book, presents them with various tableaux vivants that may have been based etchings in various editions of the book. 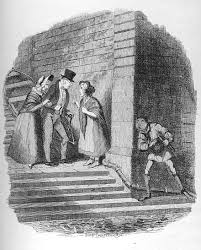 In this cinematic rendering we see Oliver’s mother give birth and die, and witness Oliver’s attempt to ask for “more” food in the workhouse, for which he is severely beaten, much more harshly punished than in subsequent versions in which he is more chased than physically chastised.

We also briefly meet Beadle Bumble, but the film then utterly drops that thread, immediately leaping ahead in time to Oliver’s meeting up with the Artful Dodger on the road to London and his introduction into Fagin’s den.

Here Fagin (William Humphrey) not only drools over his newest sexual pigeon, but shoos off his other apprentices, and—as Oliver, almost starved from his long voyage, falls into a faint—picks him up and hurries him off to bed, there being little question here about his ultimate if not immediate intentions.

Blackton and his scenarist Eugene Mullin dodge the homo-pedophilic implications of this a bit by choosing Oliver to be portrayed in their film by a woman, Edith Storey, just 17 years of age during the shoot.

Indeed, Fagin is not the only one who rapes (in the sense of picking the boy up and carrying him off) Oliver, but almost everyone one meets the boy does so, including the well-intentioned Mr. Brownlow. In Mullin’s and Blackton’s telling Oliver is represented less as a parish boy whose life is in progress than a kind of trophy bandied back and forth between Fagin and Brownlow. He is a thing with little will of his own—which I would argue is very much as Dickens’ portrays him in the novel.

Fagin’s desperate attempts to regain possession of this trophy seem, in this instance, are a result not only for his fears of the boy telling the authorities of his actions and whereabouts, but suggest a deeper desire for the boy’s body, as he outrightly accuses Nancy of working against his attempts to keep the boy in his clutches. This Fagin, very much as in etchings of the scene, personally spies on her secret meeting with Brownlow in his attempt to regain control of the boy. 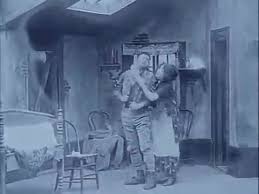 The scene in which Bill Sykes kills Nancy as portrayed in this motion picture premier of a story that will be revived numerous times, changed the way her character would be portrayed in almost all of the following films and is said to have made Nancy’s role (realized by stage actress Elita Proctor Otis) “famous throughout the world,’ later coming back to life back like a ghost out of  A Christmas Carol to terrorize Bill Sykes.

Unlike most the later versions, this 1909 telling ends with a scene from the novel in which Oliver with Mr. Brownlow, visits Fagin in prison, unintentionally confirming that Fagin was guilty of his internment in the den of prigs.

Posted by greenintegerblog at 6:20 AM