a narcissus in edwardian england

There have dozens of film adaptations of Oscar Wilde’s 1890 novel, The Picture of Dorian Gray, several of which I have reviewed in these pages. But there is little doubt the one that most hints at the central character’s queer behavior is John Osborne’s 1976 made-for-television adaptation by the British Broadcasting Company (BBC). Arguably, in fact, “hint” is not the proper word since all of the versions imply far more than they actually tell. But this production—with the beautiful young Peter Firth playing Dorian, John Gielgud playing the corrupting aphorist Henry Wotton, and Jeremy Brett acting the role of artist Basil Hallward who, having fallen in love with Dorian, paints the picture that reveals what Dorian’s face does only upon his death—almost shouts that character’s queerness to the rafters.

What becomes quite evident in this version is that despite Dorian’s chaste relationship with Sibyl Vane (Judi Bowker), who kills herself when he suddenly leaves her after recognizing her true inability to act, and the rumors of his destroying the lives and reputations of numerous other women in and outside of London, he is no ladies man, but a beautiful male with whom Basil and Henry fall in love and who quite evidently had a homosexual relationship with his university friend, Alan Campbell (Nicholas Clay). Indeed, his ability to “love them and leave them” when it comes to women—which in the fin de siècle society required women evidently to immediately imitate Hamlet’s Ophelia, scandalizing the society in general—his behavior is far less representative of his growing immorality in the mind of work’s creator than is his lovely villain’s horrifying impact on the men in his life. One might argue, from Wilde’s perspective, that Dorian’s sexist attitudes with regard to females is largely a result of his closeted homosexuality and his narcissistic fixation upon his own image. To put it simply Dorian Gray is Narcissus brought to life in Edwardian England.

But then everyone in Osborne’s adaptation of Wilde’s fiction is totally narcissistic in their absolute adoration of surfaces and appearances. The most complex of these narcissi is Basil, who while painting the beautiful Dorian falls in love with him so much—reporting to Henry that “it’s better in life to not be too different,” surely a justification for his own closeted love—that, not being able to express it through sex (even kissing another male was a crime) achieves the very opposite of the Cypriot sculptor Pygmalion whose kiss brought his ivory sculpture to life. Basil instead has killed the soul of his beloved friend by breathing life into his portrait. 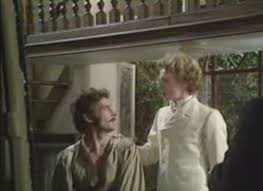 Once he has finished the painting, the “simple, affectionate” boy and friend suddenly finds himself bereft of any true human emotions, just in time to be intrigued by Henry’s ridiculous twists of human values into two-part sentences such as his description of “romance”:

Or Henry’s definition of the self—a definition to which even the current US president might subscribe—“To realize one’s own nature as perfectly as we can, that’s what we are for. One’s first duty is to oneself.”

If it may seem, much later in the story, that Dorian kills his beloved Basil because, in seeing the changes of Dorian registered in his painting, he must die to protect the now soulless, unchanging Dorian from the truth. I’d argue, however, that Dorian murders his friend because of his admission of love which is expressed not only in words—Basil having just admitted to him that “he worshipped him” upon first sight—but in the painting itself. The art reveals his love of Dorian far more that any words might express it, and Dorian clearly cannot admit to loving Basil in turn, particularly since he is now incapable of it. 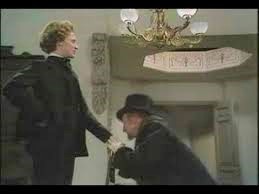 Henry also loves Dorian, at least enough that he desires to remain friends with him as long as possible, taking him to dinners, the opera, and his club regularly as if he were married to the younger man. Women are almost always a topic of disdain for Henry, but for the ever beautiful young man he has only affection. However, when it comes to Henry, love is a difficult topic since his true amour is his own words, his self-expression of his almost always cynical and corrupting nature. Henry, much like Dorian is a dead soul when it comes to others. He is not at all shocked by Dorian’s seemingly diffident response to Sybil’s suicide or even his uncaring attitude toward Basil’s disappearance, although everyone else in town seems to be gossiping about it. Woman, including his wife, are not beings for Henry worthy of discussion—except when trying to dissuade his companion from developing any true relationship with them. And Gielgud (himself a gay man who in the 1950s was sentenced in British court for "persistently importuning men for immoral purposes") in subtle inflections in his voice and through gestures of his arms and hands, plays Henry as a dandyish gay elder. Yet even he is abandoned by his young lovely, as he admits to Basil in his last meeting with him. And after his last encounter with Dorian the young beauty—“the only thing that’s worth anything”—Dorian, metaphorically speaking, dives into the pigments of his own horrible gaze, drowning in his tears of regret.

As for Alan Campbell, Firth as Dorian literally flits around his old friend’s body, reminding him of something in their past that so terrifies Alan if were revealed that he is willing even to eradicate any trace of the artist’s body with chemicals—if only Dorian will leave him in peace. Little question in this production is left to the imagination that the two have previously committed perversions that might land them both in prison, particularly if the younger Dorian claims that he was forced to participate in the act, which is surely what the letter he has already written insinuates. 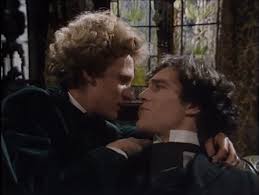 When Alan appears to reject all involvement, Dorian moves over to the seated friend standing closely before him as if ready to receive fellatio saying, “I’m sorry for you Alan, but I can’t help myself. You are the only man who is able to save me.”  As he undoes the cloth belt, opening up his short dressing gown, he sits closely next to him, almost as if to purr words of love into his ear, continuing, “I am forced to bring you into the matter. I have no option, Alan. You are scientific....” What else would bring a former university friend to commit such a dastardly act that he would later commit suicide by hanging himself?

If Sybil takes her poison because Dorian has abandoned her, attesting he will never even think of her again, Alan hangs himself because his long ago lover is still demanding his unrequited love.

Posted by greenintegerblog at 2:49 PM