Producer and director Lane Janger’s short film of 1998 Just One Time might almost be described as a brilliant trailer for his 1999 feature film by the same name. In the latter the situation is repeated, but we get to actually know the characters and see them come to some sort of resolution regarding the sexual challenges, Amy (Joelle Carter) and Anthony (Janger) demand of each other before they can be married.

Yet, I somehow like the abbreviated version better simply because it allows the viewer’s imagination to play out a wide range of possibilities on which the feature finally reneges as it settles instead for a greater sense of awareness concerning the fluidity of sexual identity.

In the short of 8 minutes we quickly meet Victor (Guillermo Díaz), a gay boy who wears fuchsia running shows but is still wary of telling his parents about his sexuality, and Michelle (Jennifer Esposito) a lesbian whom Victor, because of his fears of being spotted by his mother, requires that she purchase his gay magazines. As they walk past the window neighborhood friends they overhear a heated argument between Amy and Anthony, from which Michelle walks away, while the ever curious Victor, who is highly attracted to the handsome Anthony, stays on to eavesdrop.

The macho Anthony has asked his fiancée to grant him the favor before their marriage, for “just one time,”  to let him watch her having sex with another woman. She is understandably outraged by his request, while he, a somewhat sexist fireman (as we later discover in the longer film) sees no harm in his request. So upset is Amy that she slams the door and comes out to the building stoop where Victor stands to brood about it.

Equally insensitive, Victor cannot understand why she also might be also outraged by his auditing their conversation. But he is so charming in his complete candor that she shares her concerns with him, debating whether or not she should even leave Anthony for making such an outrageous request. 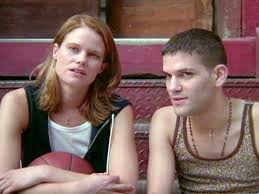 Victor sees it another way. Why should she leave the obviously “sexy and hot” Victor when she might easily arrange a quick fling with Michelle that would satisfy Anthony’s whims?

Those “whims,” we quickly discover represent a far deeper desire as Janger’s camera suddenly returns to the bedroom where we watch Anthony pull out an apparently lesbian magazine from under his bed with, which along with a handful of lubricant, he begins to entertain himself.

A few seconds later Amy returns, interrupting his masturbatory pleasures, to announce she will go through with the deal if only he promises fulfill her part of the bargain. He agrees, as she announces her request, that he have sex with a male—in this case the all too eager Victor, who immediately appears at the doorway muttering that he’s never been this lucky before and suggesting that his only sexual experience has come from magazines, ready and willing to take on the adventure as he quickly begins to strip. 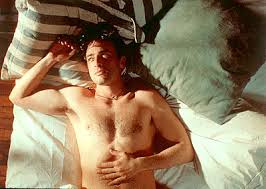 The horrified Anthony, already naked under the covers, temporarily seeks a way to escape the pact, but Amy stands at the watch reminding him “It’s only just once.”

What any normal gay male would desire, obviously, is that the one time might convince the “hot” Anthony to try it again and again, just as any regular lesbian might wish that Amy truly come to enjoy Michelle’s company. I’ll describe what actually does occur when I review the feature below. But for now, at the close of the short, all options are on the table.

And that’s the joy of Janger’s short: in its very brevity the film puts no limits of the possibilities we might dream up for all the characters involved. It’s an empty slate which the viewers are encouraged to fill in.

This work won a GLIFF Award in the "Best Boy's Short" category at the Austin Gay & Lesbian International Film Festival.

Posted by greenintegerblog at 5:00 AM