shouts in the dark

In terms of dialogue, Canadian director Laurie Lynd’s 1991 short film RSVP is almost a silent film. Nearly all of the spoken words we hear throughout this film—with the exception of a few murmurs of the students in the high school hall who almost point with interest or perhaps even with pride to the homophobic message “Sellman is a faggot” which they or other of their friends posted upon the classroom door of their English teacher, and a few words recalled to memory by Sid (Daniel MacIvor), Andrew Sellman’s lover when Andrew (Ross Manson) returns to retrieve his sweater as they are about to embark on a visit to the doctors—are spoken through the telephone, most of them which we hear from a friend of Sid’s (Stewart Arnott) and, at the very end of the work, from Andrew’s father (Gordon Jocelyn) spoken over the couple’s answering machine. 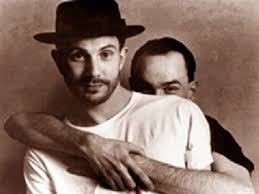 Yet, the human voice, in this case opera singer Jessye Norman’s* glorious rendering of Berlioz’s “La spectre de la rose,” a song evidently requested by Sellman before his death to be played on the local Winnepeg radio stations dominates the 24 minute movie.

We first hear it when Sid returns to the couple’s empty apartment, soon after his lover’s death, unable to even imagine the possibility of answering the telephone message left by his friend. He enters the kitchen, opening and quickly closing the refrigerator after he discovers it mostly filled with pill cannisters that had obviously become part of Andrew’s regular regimen. Hearing the announcement of the song by the radio announcer Sid immediately, if at first unsuccessfully, attempts to record the aria.

We hear the entire work as Lynd briefly transports us to various scenes of the workplaces of Andrew’s friends: a library, an AIDS support center where we witness a man clipping Sellman’s obituary from the newspaper to add it on a wall posting of dozens of others, and a bookstore—places obviously regularly visited by the literate, dying man. 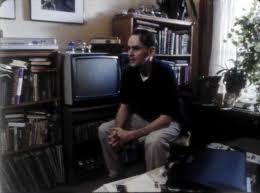 The very next scene features Sid at work, painfully tossing Andrew’s pills, personal toiletries, and clothing into a box. He saves only the beloved sweater. Checking their record collection, he  discovers the original LP recording of Berlioz's Les nuits d'été which includes “La spectre de la rose,” in their own record collection and, we discern later, again requests it to be played over the radio, this time telephoning Andrew’s sister (Ferne Downey) and his lover’s mother (Judith Orban) to tell them when the piece is about to be aired.

We observe the sister listening to it, breaking into sobs, and watch Andrew’s mother, after serving her husband his dinner, attempting to find the station of their antiquated radio.

The last telephone message from the father is a particularly painful one which we hear recorded on the machine before Sid returns home after the funeral, the elder clumsily expressing his regrets that they had not been able to talk more after the funeral, but that he knew how good Sid was for Andrew, how he looked after him. It is apparent that the father had not been very receptive to the men’s relationship and perhaps had even refused to talk to Sid or even keep in close touch with his own son. The short call, accordingly, is almost a shout in the dark of his love after years of rejection and regret.

Film critic B. Ruby Rich argued in her influential essay “New Queer Cinema” of 1992 that RSVP was one the many new films of the period appearing in the Gay Festival circuits by queer-identified people that used radical aesthetics to fight homophobia, to struggle with the issues surrounding the AIDS epidemic, and to discuss LGBTQ issues with regard to race. I don’t entirely disagree with her, particularly regarding the films outcry against homophobia. Yet, I’d also argue that Lynd’s film belongs more to the long tradition of quiet Canadian films that reveal their LGBTQ sentiments in a realist tradition that does not necessarily require overt commentary, a work in the tradition of Stanley Jackson’s Cornet at Night (1963) as opposed to his compatriot John Greyson’s far more radical works such as Lilies of 1996, along with directors whom Rich also identified or would soon be connected with “New Queer Cinema” such as Cheryl Dunye, Gregg Araki, and Tom Kalin.

While searching for Vimeo’s on-line edition of the above film, I coincidentally found a Vimeo streaming of another film also titled RSVP—this directed by Shannon Deeby in 2016—which, although not as brilliantly conceived or realized as Lynd’s work and not, necessarily, connected to AIDS, was so eerily similar in its narrative and themes that I could not but choose to pair this short 13 minute move with the other.

In this BeeNest production, a gay man, Devon (performed by independent director Lance Marshall) having just lost his loved male companion, Stephen, is seen driving with the urn on the seat next to him—which in the earliest frames of scene is represented by the image of his still-living lover (played by James Oxford, Marshall’s real-life husband)—as he travels to an East Hampton, New York, beach where, upon the request of for lover he is about release his ashes. 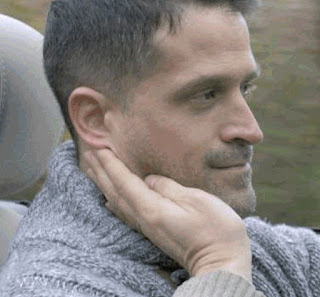 He talks briefly to his ex-husband about their love, etc. soon after pulling into the empty parking lot, whereupon he checks his cell phone to see if the others he has invited, apparently Stephen’s family members, have responded. His tears and apparent anger make it clear that they have all made excuses for their absence—excuses we can presume, particularly when we soon after discover that Stephen’s father is a Baptist minister, have to do with their disapproval of his and their son’s gay relationship.

After another moment of sobbing,  Devon grabs the urn, a bottle of champagne, and a beach blanket as he makes his way down to the water’s edge settling into the sand. He begins to drink directly out of the bottle, hinting that he may be headed for a real bender before he gets around to tossing what remains of his lover into the ocean. He toasts the bottle:

To Stephen. In your eyes I was able to see my purer self. And in

your memory I will eternally be held in the warmth of our love. 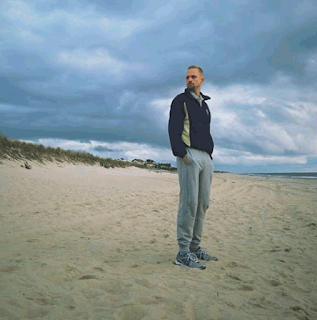 Slowly another man comes running from the distance down to stand beside Devon. The man, Stephen’s younger brother Thomas (Ryan Jonze) apologizes, as the e-mail message apparently had, for his parents’ inability to attend, their being “swamped with the revival” being held that weekend. Stephen’s devastated partner hardly bothers to answer, turning away.

“Can I...may I join you?” He asks. “That’s why you were invited,” answers Devon, again turning away. Thomas sits beside him. “Sorry, I didn’t reply myself.” An uneasy silence settles in between them, which the brother finally breaks:

Yeh, he got out ya know. But..Dad disowned him but we was the

lucky one. Just wish I...I’d been stronger. And stood up to him.

So surprising is this short confession that Devon, pausing a bit, asks him “Are you gay?” “Oh no, no. Married. Kids.” Thomas responds, before nervously amending his comments, “I mean married to a woman. The kids...with her.” It’s a fascinating restatement of the obvious, as if he might have actually imagined the other possibility, which suggests his commitment to the normality of his life is not a total immersion, particularly when he follows this with stating that his father can really be a “prick.” “Sometimes...I can take it, but mom....I don’t know.” After another long pause, he adds, “Can’t say I didn’t envy his ‘get-out-of-jail-free card.’”

Devon’s one-word interjection, “Wow!” is appropriate given his and our sudden perception that the father’s religiously-embedded homophobia has effected not just his homosexual son, but the entire family, delimiting the life of his wife and his heterosexual son as well. The inability to accept sexual differences is connected to the inability to accept the role of women in society, the different values—however minute—of even the heterosexual heir. The patriarchal world Stephen’s father represents admits no one.

The film closes with a strange admission from Devon of his own lover’s limitations within this same context: “You know, I don’t know if he saw it that way. I wish he had.”

I don’t know whether Deeby ever saw Lynd’s film or was in any way influenced by it, but the desolation that lies behind both of these films was powerfully expressed decades earlier in Christopher Isherwood’s (1964) novel, A Single Man, reinterpreted by Tom Ford’s 2009 film of the same name. If you recall, in that work the lover, George Falconer, was not even allowed by the family to even attend the funeral of his lover, Jim, killed in a car accident. One might suggest, in the context of this film, he was not even permitted to reply.

*Lynd sent a tape to Norman to obtain her permission to use her recording in his film. She was so impressed and moved by the film that she attended its first screening, holding the director’s hand for much of the film’s run.