Joseph Minion (screenplay, based, in part, on a radio monologue by Joe Frank), Martin Scorsese (director) After Hours / 1985

Martin Scorcese’s sadly underrated 1985 film After Hours begins with situations that suggest the film might be a romantic comedy in the manner of  Billy Wilder’s The Apartment. An unsatisfied computer programmer, Paul Hackett (Griffin Dunne), working in an office in upper Manhattan, is teaching a neophyte to the company, Lloyd (Bronson Pinchot*), how to enter the system and set up his program, during which we immediately perceive just through the movement of Paul’s eyes how utterly bored he is in his role as mentor. But then everyone in this working world—let us call it “Kansas”—is equally seeking a way out from where they feel frozen into space. Lloyd admits that he sees his job as only temporary, expounding upon his dreams of opening up a small publishing house. At a nearby café where Paul goes after work, the cashier (Rocco Sisto) moves in a silent pas de deux and spin, obviously practicing his movements for his study of ballet. Even later, he encounters a waitress in SoHo’s Terminal Bar, Julie (Terri Garr), who leaves him a message “Help, I hate this job.”

Paul is himself rereading Henry Miller’s Tropic of Cancer which recounts Miller’s sexual adventures, far outside of anything the reader obviously has experienced. What is interesting about the autobiographical fiction, in the context of this film, is that it particularly reveals Miller’s repressed homoerotic desires which are wrapped within a dark sense of homophobia. 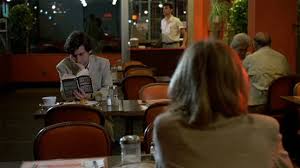 At the café Paul meets another admirer of the book, Marcy Franklin (Rosanna Arquette), who joins him at his table as they discuss it. She mentions that she is staying in SoHo with a friend, Kiki Bridges (Linda Florentino), who creates sculptures, and asks if he might be interested in buying one of her friend’s Papier-mâché bagel and cream cheese paperweights. Giving him her friend’s SoHo telephone number, Marcy disappears into the night. But Paul, having written down the number, calls her and they plan for an immediate meeting in the SoHo loft: Buzz in under Bridges, she tells him, only “the Bridges is crossed out,” suggesting what we will soon discover to be our innocent hero’s fate as he quite literally finds, in his voyage into a world he has never before imagined, that he has burned his bridges to the past in the process.

A bit later in the film Marcy tells Paul of her sexual experiences with her former husband, who was obsessed with The Wizard of Oz and could not help himself from shouting, upon orgasm, "Surrender, Dorothy!"

Marcy: Instead of saying something normal like, "Oh, God," or

something normal like that, I mean, it was pretty creepy!

And I told him I thought so, but he just, he just couldn't

Without being too literal in its connections, After Hours might be said to be an updated version of that great American fantasy, wherein Hackett becomes a desperate Dorothy after a whirlwind taxi ride that ends with his landing in a strange new place where everything he knows is turned upside down. In writer Minion's somewhat perverted and misogynist retelling of the tale, the witches are closer to man-eating S&M harridans with their flying monkeys represented by the SoHo vigilante mobs in search of a victim.

The Scarecrow without a brain, the Tin Woodman without a heart, and the Lion without any courage are perhaps encapsulated in the one central figure, Paul, rather than split into parts. But the images of fire, air, and water which dominate The Wizard, are all here, in the mysterious references to burn victims by Marcy, Kiki, and Paul—who as a child, after having a tonsillectomy was put into the burn ward of the hospital with blindfolds so that he wouldn’t have to witness the misshapen patients—as well as Gail who wants to burn off some of the Papier-mâché  debris attached to his skin, and, of course, the first stanza of Peggy’s Lee’s famous song “Is that All There Is?” which closes the movie. The miserable rain-storm which Paul must endure and the overflow of the bartender's Tom's toilet, along with the numerous glasses of the liquid he is served and offered throughout the film clearly serve as reminders of H2O. And the wind’s robbery of his $20 bill early in the film, and the air-headed desperation of waitress Julie and the mad Mister Softee truck driver Gail (Catherine O’Hara) send us into the stratosphere of absurdity.

Like Dorothy, all Paul wants to do, as he explains over and over, is "to go home." But having lost the $20 bill—his only cash—and having not even enough change to pay for the fare (hiked to $1.50 at midnight) for the subway, he is unable to escape, and is forced to remain in this world that seems, as Marcy has put it, "unable to stop." No one apparently sleeps in this Oz.

If, in fact, the original Baum story is an allegory against the Gold Standard and the greed of the Wall Street millionaires, we recognize that Scorsese's story is also centered about the haves and the have-nots. The robberies taking place throughout this SoHo neighborhood are being committed by an unlikely pair, Neil and Pepe (Cheech Marin and Tommy Chong), who are clearly just attempting to survive—although in Minion's satiric version, even they, like nearly all the citizens of this neighborhood, are intensely seeking art:

Pepe: Art sure is ugly.

Neil:  Shows how much you know about art. The uglier

the art, the more it's worth.

Pepe: This must be worth a fortune, man.

If art is money in this world, it appears that it is only through "art," in a creative re-envisioning of the world, that one can find a way "out," the way to survive. The trouble with Paul is that he has no imagination—in short no brains, no heart or empathy, and no moral courage—although, as in the original tale, he eventually proves that he has all these qualities. His ridiculous attempt to find an easy "lay" ends up in her death and his own entrapment. The SoHo figures may look ridiculous, but in their S&M outfits, their 1960s hairdos, and their Mohawk haircuts, they are at least attempting to remake themselves into something other, creating a kind of kitsch—or we might say, populist—art. In this world, Paul is nothing, like his almost empty apartment, is too bland to survive.

The problem of the film is how the inhabitants of the brave new world into which he has stumbled will be able to show the normative-thinking Paul how to think, love, and find enough bravery within himself to hike his way back to 91st Street. 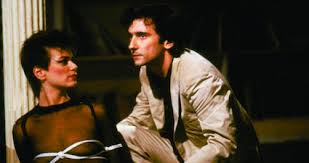 The SoHo-ites, through their very differences from anyone else he has met help him to open his mind simply in order to comprehend what his happening. When the entire community begins to suspect that he is the criminal who has stolen their treasures, he is forced to cunningly find ways  to escape. The dozens of coincidences that befall him teach him to make connections and resolve contradictions in order to show him how in this world people are interrelated: the Marcy he meets and who commits suicide upon his sudden abandonment is the same Marcy who the bartender Tom—who offers to give Paul the money for his fare home—loves and who may or may not have been the same  “boyfriend” Marcy has told Paul raped her for six hours; Paul’s desperate would-be lover Julie is the same artist and poster-maker who has plastered Paul’s likeness throughout the area, calling him out as the villain.

Helping Paul to find his heart is perhaps the most difficult of the SoHo inhabitant’s tasks. Oddly, this heterosexual runs from nearly every woman he meets, Marcy, Kiki, Julie, and later Gail, finding them all too strange and complex to remain with them for even a single night of sex. The promise of “romance” is made meaningless in his new environment. Oddly, it is the males who succeed in showing him what love and caring truly is. The bartender’s offer of money demonstrates a kind heart. The two Tom of Finland-like leather boys endlessly kissing on the nearby barstools also show a deep empathy with Tom when he discovers that Marcy has died. The man (Robert Plunket**) who Paul unintentionally “picks up” is ready and willing to be gently introduced by the stranger into the mysteries of gay love.

But perhaps these highly diverse figures living just south of Houston Street in Manhattan demonstrate the depths of their hearts most significantly in the way they ban together as a community in order to help and protect one another, almost every last one of them joining up to scour the streets to bring the robber who has stolen their possessions to justice, even though they are mistaken in believing Paul to be guilty. Yet Paul and others like him are guilty, in their hetero-normative values a threat to their existence. All Marcy sought, as she expressed it several times, was to talk with him, a request he found to perverse to grant. 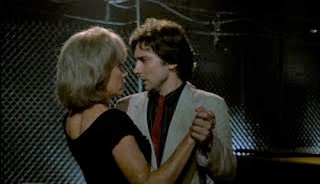 If there is a Glinda in this tale, a Good Witch, it is the near-invisible June (Verna Bloom), who sitting each night drinking in the raucous noise and filth of the Club Berlin, lives in a basement apartment beneath it. Trapped by his inner criminality, Paul dares to return the Club which threatened to transform him into one of them, and for the first time employing his brain, opens his heart to the lonely and lovely June, communicating true sympathy with her through a shared cigarette and a quiet dance. Touched by Paul's seemingly inexplicable kindness, she takes him into her cavern, transforming him from a human being into an artwork that looks similar to Kiki's Edvard Munch-like image of The Scream. Of course, Paul, entombed by these layers of Papier-mâché (images of which are repeated throughout this film), is screaming out for help, but, when June covers his mouth to protect him from discovery, he is finally silenced. The robbers snap him up the moment June has left the room, Neil proclaiming the absurd truism of this world: "a television is just a television; art is art!" 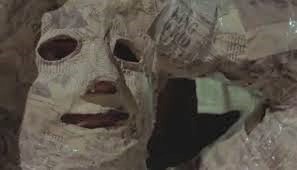 Undergoing another cyclonic voyage, Paul, now as an artwork, falls from the truck precisely where he has begun his journey, at the front gate of the company where he works. Like a mummy come to life, he cracks open his shell, marching to his desk to be greeted, like a friend, by his computer: "Good morning, Paul!" Surely he must ask—after what has had to be the longest night of his life—as Peggy Lee does in her song played in the film only a few moments earlier: "Is That All There Is?" Surely he will return, either in body or in spirit, to the world in which he was greeted by real human beings.

*So that I don’t have to write about it at greater length, let me mention here that in the terribly homophobic Beverly Hills Cop (1984) directed by Martin Brest, Pinchot played perhaps one of the funniest interpretations of a stereotypical gay man, an art dealer’s assistant, Serge. In the same film Eddie Murphy mocks gay love by imitating the lover of wealthy white patron dining in an executive club.

**After playing in another couple of small film roles, Plunket wrote the highly acclaimed picaresque fiction, My Search for Warren Harding in which the central character is a gay man trying to get more dirt on the love affairs of the so-called “worst” president in history.