The short film played out in the boundary between documentation and realist fiction Behind Every Man Is a Good Woman... is about the most normative film I have written about in the pages of My Queer Cinema. The young black woman walking the streets of downtown Los Angeles, shopping in what appears to be the Garment District before making her way to the Jewelry District a few blocks away begins the film my expressing her major desires: “I’d like to live a respectable life, that’s for sure. A happy life,” before she goes on to declare the man she would like to marry is someone who “who wants to go places, to make something of himself.” Almost as in a cliched ending of these sentiments, she concludes “Behind every good man...you know what they say.”

The year is 1966, and the streets are filled with people, walking, shopping, and standing outside stores in conversation. She receives several male stares, and is particularly interested in a young man who appears to be hispanic standing nearby in conversation with a friend. 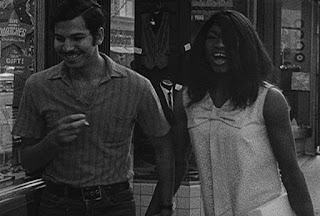 He catches her eye, and she looks back at him, he signaling her to join him as the walk away together, stopping by a coffee shop. They talk for a while, without us being able to hear what they say, as she glances out the front glass window to see her bus passing by.

She leaves quickly, rushing to catch it, but as she almost reaches the vehicle she trips and falls to the concrete, with a quick glimpse of a handsome man in a suit perhaps ready to help her up, although never see that actual gesture.

So begins what is almost a short musical operetta, played out to three popular songs, the first being Dionne Warick’s “Reach Out for Me” from 1964, whose lyrics clearly express our character’s inward fears to which she has so far refused to admit, but which her fall at the bus stop hint at:

When you go through a day

And the things that people say

They make you feel so small

They make you feel that

And when you just can't accept

The abuse you are taking

Darlin', reach out for me.

In case, like the male hero of Neil Jordan’s The Crying Game (1992), you’re not terribly alert to the subtle differences between a black female and a black transgender man, director Nicholas Ursin makes all transparent in the very next frame, as we see our hero dressing and making up his thin male body as changes himself into the woman we have just witnessed on the Los Angeles streets.

She is preparing for her date, this time accompanied by similarly appropriate music by Dusty Springfield, also from 1964, “Wishin’ and Hopin’” (a song first sung incidentally, by Warwick):,

Wishin' and hopin' and thinkin' and prayin'

Plannin' and dreamin' each night of his charms

That won't get you into his arms

So if you're lookin' to find love you can share

All you gotta do is hold him, and kiss him and love him

And show him that you care 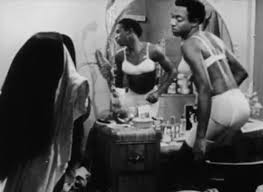 As she puts on her makeup, she tells a fascinating story of how in a West Los Angeles gas station “...I decided to go in the men's room. Not because I am a man, but because I wanted to go in the men's room, period.” There she encounters a handsome man who seeing her, begins to back out, excusing himself as he suggests they must have put the labels on the wrong doors. She calmly replies, “No, this is the men’s room,” as she continues about her business, almost immediately recognizing that under his coat he is wearing a badge.

He takes her outside just to check whether she is wanted for any crimes, but when he discovers she is clear, politely releases her—but not before a younger cop pipes up: “It’s too bad you’re a boy because you’re a real knockout,” which she, almost sassily, tells the camera “I took as a compliment.”

By the time her story is finished she has once more transformed herself, set her small table, and now lights two candles, turning off the other room lights while she awaits her date. She sits on the couch for a few moments pretending to read a magazine, while the third song of this remarkable transgender musical plays forbiddingly in the background. The lyrics express her obvious fears, as The Supremes sing “I’ll Turn to Stone” from the year 1967, the date of this film’s release (although several of the sources suggest the film was released in 1966):

Take your love from me

If your love I couldn't call my own

I need your love in every way

Your love I cling to

When things slip away

I'll be lost and alone 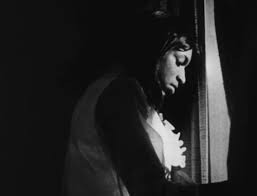 She hears a car drive up, going over to the window and looking out, sadly turning back into the room after evidently not spotting the man she is waiting for. Quietly she goes over to her table and, like Tom Wingfield’s sister Laura in Tennessee William’ The Glass Menagerie, quietly blows out her candles.

The director of this beautiful short film is credited, as I mention above, as Nicholas Ursin. But the Internet Movie Database (ImDb) reveals his working name is Nick Eliot, who was the lover of Howard and my friend, artist and film director Norman Yonemoto. Eliot was the leading photographer of some of the hottest porn films of the next two decades, including Kansas City Trucking Co. (1976), El Paso Wrecking Corp. (1978), Three Day Pass (1982), and A Night at Halsted’s (1982). In 1979 he also worked as one of the many noted cinematographers of the documentary Army of Lovers or Revolt of the Perverts, a dairy-like work by and about German gay rights activist Rosa von Praunheim, a film I also review in these pages.

The UCLA Film and Television Archive with the help of The National Film Preservation restored Behind Every Good Woman..., giving it new life for the LGBTQ festival circuit.

Posted by greenintegerblog at 1:26 PM