For 17 year old high school student Thomas (Paul Gomérieux) it all begins at a teen house party where he sits with two of his best friends dishing their classmates as they enter in and out of their couchbound sights. One of the class Romeos is chatting up a good-looking girl—not, Thomas admits, his type—when suddenly the couple’s conversation alters as they begin to fight, the boy voyeurs laughing over the all-too public event. As the former young courtier stalks off, one of the friends goes over to introduce himself to the girl they’ve been observing, hoping to interlope, one imagines, on the immediate rebound. 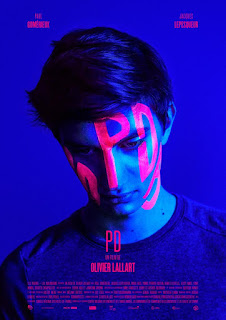 A few moments later a handsome, tall young Spanish-looking boy, Esteban (Jacques Lepesqueur) enters with a highly attractive young female classmate. The friend notices that Thomas’s eyes immediately follow the movements of Esteban as he enters the room and even comments to Thomas, almost as if they were two young gay men evaluating the hunks that come into their purview, that perhaps Esteban is Thomas’ type. It is a fairly innocuous statement, one of many such inquiries that young people pose to each other in attempting to discover each other’s inner desires. But Thomas immediately throws the metaphorical ball back into the heterosexual court, saying that he was really eyeing the beautiful woman who Esteban is dating. Both agree, however, that  Esteban and his women are out of their “league,” so to speak.

As in many such teenage gatherings, we observe the stragglers playing a kind of “Truth or Dare” version of “Spin the Bottle.” With first the bottle spin two women are asked to kiss each other, which they do, quite seriously, some young boys responding that it’s so “hot” to see two women kiss.

When another woman spins and “dares” the chosen one to kiss the person of the second spin, the bottle pairs up Esteban and Thomas, the former of whom almost reneges on the act before being forced to carry out the game’s rules; after all, the girls argue, if men can be turned on my women, why can’t the girls see two boys engage in an intense kiss. The two boys finally offer their teenage audience the pleasure of their inter-locked lips.

Later, having gotten quite drunk, as his head lies on his friend’s shoulder, Thomas admits that, “yes, he actually liked” Esteban’s kiss. But he’s not gay, he reassures his buddy.

Denials hardly matter in this homophobic world, and by the next morning, Thomas observes nearly all of his classmates turning away from him as he enters into their space, whispering to others with their eyes darting to catch a side glance of Thomas’ visage, some actually engaging in cat-calls or uttering the school’s favorite slur, “fag.” We see Esteban, obviously the recipient of similar insinuations, slugging another boy in the distance, after which the handsome tall youth grabs hold of his girlfriend almost as if she were a life raft.

Thomas’ friend admits to having shared the boy’s previous night’s admission, arguing that it was just something to laugh at; yet he too does not now dare to be seen talking too long to Thomas without also being labeled as a queer. A shower after track is torture for Thomas as the other boys not only shun him, but make rude remarks about his desires to fuck them. 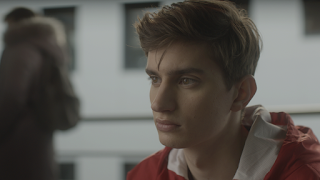 With an eerie accompaniment of a high-pitched electronic music by composers MEKIAS and J-Zeus, French director Olivier Lallart reveals the terror of suddenly finding oneself in high school isolation by focusing his camera on side, shoulder-and-head shots of Thomas as if he were being cast for a role of a leper for William Wyler’s Ben Hur, Gomérieux’s naturally pouting-lips pointing to his disappointment with his former friends and his entire life. But we also recognize that in his sudden ostracization, Thomas must now face his own questions about sexuality. As one of his acquaintances reminds him, he has never asked the girls out for a date. And his eyes do give him away as he gazes at his new enemy, Esteban, with sudden longing and now fear.

So, we perceive, we have entered the murky territory of yet another lecture, for better or worse, on homophobia, a crucial subject to which young men and woman must repeatedly be exposed, but for an older viewer such as myself, a theme so threaded into the narrative of LGBTQ cinema that one can only wonder what in a 35 minute film Lallart can contribute to the topic.

Indeed, a lecture by the high school history professor (Marc Riso)—occasioned by overhearing one student call another “PD” (pédé) or, in English, “fag”—attempts to provide a précis of the history of “homosexuality” from the ancient Greeks and Romans, for whom he argues there was no concept for and no imaginative separation between homosexual and heterosexual acts, to the rise of religious values and the Industrial Revolution’s hierarchies which demanded that men and women contain themselves in the structures of family units in order to produce consumer children. Explaining to young listeners that what they are expressing in heir hurtful terminology is a cultural invention which they’ve learned but does not truly exist nor need to be perpetuated. Along with revealing his own homosexuality, what he expresses appears to be enlightening to this young student body. And by the end of the film they are finally able to turn their attention away from something they see as the “other”—and therefore “monstrous” in the sense of a “warning” or “demonstration” of its queerness—in order to attend to their own normative desires. But it all seems too easy and simplified in this work, as if all one has to do to stop the fear of sexual difference is to attend to one’s own sexual interests, no empathy or even curiosity required. After all, these as modern day students,  high schoolers who all claim they are LGBT friendly, whatever that might individually mean to them.

Fortunately, Lallart does not focus on the normative aversion to queer individuals, but on Thomas and Esteban themselves, revealing that despite all of his macho bluffing, Esteban is truly attracted to Thomas, using the threat of verbal abuse to actually plant kisses of desire that he pretends that “fags” are always seeking. It’s it a wonderfully strange scene in which Thomas, almost totally passive is seemingly tortured by Esteban’s intense love-making mockery. It reminds anyone who has seen the coming-out British film Get Real (1988) of school jock John Dixon’s beating of his lover Steven Carter in the men’s locker room, outside of which wait his sports buddies talking pleasure in Carter’s screams of pain, while within the audience witnesses John’s slugs entering his school bag while his friend performs a dance of howls upon the floor. Esteban’s brutal kisses in PD are intended to be interpreted as a punishment that salves the sufferer’s symbolic pain with the balm of love—a representation of just how perverse gay love is in a world that nourishes self-denigration and hate.

Who wouldn’t be confused in such a closed society? Thomas even stalks down two gay men whom he observes touching each other and holding hands in a local pub to ask them his inexpressible question....”How to....” After inquiring whether he attends the lycée, they rotely answer, “It gets better,” but recognize quickly that it is no answer at all, and that perhaps it never truly does get better but, as one puts it, “you come to ignore it.” Or, hints his friend, it never truly does get better. What changes is the way you come to see yourself. They suggest that whenever he becomes the subject of their stares that instead of turning away, he look directly back at them into their eyes, almost as a kind of challenge. Yet, as we all know, that too can be dangerous. 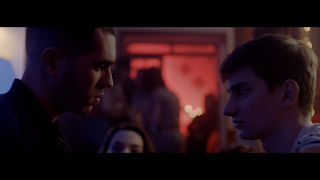 Nonetheless, Thomas finally does accomplish something similar to that when, at the school prom, he pulls away from the girl (the very same woman that he and his friends first observed in the earliest scene of this movie) and moves across the floor to where Esteban is dancing with his girlfriend, moving his friend’s arm from where he holds his date and placing it to encircle his own waist. As if intoxicated with Thomas’ bold move, Esteban takes up with dance with his gay lover, as all the other dancers stop in place, openly staring with wonder. The two challenge them not by looking back into their stares but deeply looking into each other’s eyes as they glide across the floor. A few seconds later, the others, as if released from an ancient curse, turn back to their partners and continue their dance.

If it’s a bit difficult to believe that “that’s all there is” to it, it’s a very lovely fairy tale which is worth holding onto as long as one can.

Posted by greenintegerblog at 9:26 AM