a farce with notes

Terence McNally (screenplay, based on his play), Richard Lester (director) The Ritz / 1976

What do you do with a film like The Ritz, particularly as it appears in movie form fast after its own Broadway success and the far-sweeter and more honest 1975 comedy shot in the gay bathhouse Continental on which The Ritz is probably based, Saturday Night at the Baths? Clearly, it is of interest to LGBTQ audiences. The playwright and screenwriter Terence McNally is not only openly gay (having had relationships with fellow playwright Edward Albee and actor and director Robert Drivas before marrying producer Tom Kirdahy) but has had a long record of writing serious gay works, along with his early attention to the AIDS epidemic. I attended the theater production of The Ritz with my husband Howard at Broadway’s Longacre Theatre and later saw the film when it was first released. I saw it again yesterday, just to test my original impressions with how I might react to it 44 years later. Chalk it up to senility, but strangely this third time ‘round I liked it somewhat better.

Yet what to do about a work that treats everything and everyone with which and whom it comes in contact like a vaudeville stereotype—including homosexuals, gay baths, gay bath patrons, Italians, Puerto Rican women, overweight men, men who are attracted to and chase (“chubby chasers”) overweight men, Jews, transvestites, muscle-men, detectives, men with high voices, heterosexuals, theater producers, go-go boys, and the city of Cleveland.

Furthermore, although the film features some of the best comedians imaginable—Jack Weston, Kaye Ballard, and Jerry Stiller for starters—except for Treat Williams, the go-go boys Tiger and Duff played by John Everson and Christopher J. Brown, and Rita Moreno(1) the movie, most strangely since it supposedly occurs in a gay bathhouse filled with men determined to visually attract the members of their own sex, is stuffed with some of the least attractive actors to post their faces, bellies, and butts upon the silver screen. Perhaps the fact that the three major comedians are portraying heterosexuals might comically explain that fact except that the Ritz Baths seem also to be a major attraction to the least attractive men in town, including other excellent thespians like F. Murray Abraham and Paul B. Price.

Moreno, playing the washed-up would-be musical actress Goggie Gomez, moreover, speaks Spanglish as if she had studied with the Spanish-born guitarist and former wife of Xavier Cugat, Charo; and Williams playing Detective Michael Brick inexplicably speaks like a squeaky voiced Baby June (“my body developed but my voice didn’t develop with it”), renders them both quite sexless, particularly since Moreno is mistaken for a transvestite, while detective Williams is totally improbable as a “dick.” In short, for a hidden retreat of forbidden lust and queer passion, The Ritz is without a sexual groan stirring in the house.

With this film’s director Richard Lester(2) at the helm it might have been wonderful to see what chaos the Beatles, playing the four straight intruders, might have imposed upon this gay haven—I can just imagine Ringo playing the discombobulated singer Googie with a Scouse accent; George subbing for Weston’s character, Gaetano Proclo, the Beatle dubbed as “the quiet one” forced to switch type to become a loud and rambunctious interloper; John playing the Mafia-involved Garbage King Carmine Vespucci, the Jerry Stiller figure who has put out Proclo’s death warrant; with Paul playing the high-voiced pretty boy Brick; and I am sure Brian Epstein might have been more than happy to take over Murray’s role as Chris, desperately seeking sexual contact with anyone is this god-forsaken den of inequity(3); isn’t this perhaps something like what playwright Joe Orton imagined for his script of a third Beatle’s flick?(4)

You get the idea. The only I can even talk about McNally and Lester’s work is in terms the farce it desires to become. Surely, the playwright originally imagined his work to be a Feydeau-like sex romp with people spinning in and out of beds, hiding, sometimes en masse under them, and mistaking everyone for someone else of which they were either desirous or terrified. 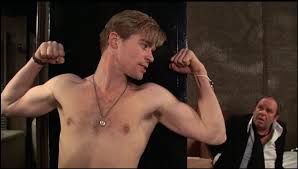 To clue you in to what has to be a utterly convoluted plot if it is at all to succeed in its genre, because of his increasing mafia business dealings Carmine Vespucci (Stiller), on orders from his dying father, has ordered his brother-in-law, Gaetano Proclo (Weston) to be murdered because of his unknowing interference with the family’s plans. In an attempt to escape the contract on his life, Proclo jumps into the first taxi he can hail, demanding to be taken somewhere where he can never be found. It just happens that the taxi is owned by Vespucci and family and the driver has been told to take Proclo to the Ritz, a gay bathhouse.(5) This is where first time detective Michael Brick comes in or is supposed to have been already been waiting to be discovered with Proclo in his bed by Vespucci who, it stands to reason in heterosexual heaven, to man could blame for killing a brother-in-law found in the arms of a gay man. 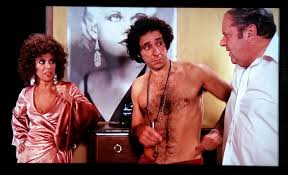 In between and amidst this hither and thither racing up and down floors, in and out of rooms (including the notorious steam room), Googie performs her hilariously malapropic and maladroit Broadway musical numbers(7); Chris calls out for love, at one point shouting that Joe Namath is in “room number----,” his own room obviously(8), which proves to Proclo that this truly is not a gay bath; and Claude decides to enter the talent contest, demanding that Proclo and Chris join him in a lip-sync performance of a song by The Andrews Sisters, a contest which they indisputably win!

Too bad Proclo is such a dim wit that it took him what seems like half of the movie to realize that not only has he mistakenly chosen to hide out in a gay bath, but that the shocking things he can’t believe he’s encountering are all actually quite fun.

By film’s end the real Vespucci and Proclo’s wife Vivian (Ballard) have joined the frolics at The Ritz, eventually unraveling the yarn of absurd events, with Vivian, realizing how her brother has tricked her husband into a false instance of in flagrante delicto threatening to reveal how Vespucci has raked off the profits of a local bingo game if he doesn’t cancel the contract for Proclo’s life. Even if no one will admit it, all seemed to have learned that life is a bit more exciting at The Ritz than in New Jersey or Cleveland to which the straight folks are sentenced to return. 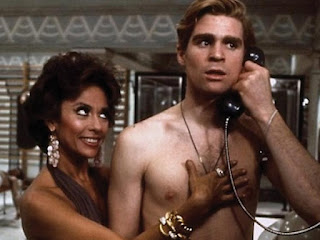 The “siren-voiced”(8) Brick gets the girl, the goofy Googie after he reveals that he has an uncle who is a theater producer, and off they go down the yellow brick road of utter perdition without knowing that it was Brick’s uncle who fired Googie from all of her previous musical gigs.

(1)Just because of her role of Anita in the film version of West Side Story Moreno will always remain beautiful to me.

(2)In case you were born after the Beatles two movies, you may not know that Richard Lester was the director of both

(3)In Christopher Münch’s film The Hours and the Times (1991), the director hints that Brian Epstein, the gay manager of the Beatles, who traveled with John Lennon to Barcelona on holiday in 1963, may have engaged or attempted to engage Lennon in sex. See my review above.

(4) In 1967 English playwright Joe Orton was asked to write a script for The Beatles’ third film. by then Orton had become a celebrated playwright in the London theatre. The Beatles’ manager Brian Epstein thought he might be the perfect writer for a Beatles film, and Paul McCartney had previously invested £1,000 in Orton’s other play Loot. The resulting script was titled Up Against It. Orton met with Shenson  and began writing the script. He also met McCartney and Epstein on the day before Christmas, and a contract was drawn up,  which allowed Orton to buy back the script rights if it were rejected. Orton delivered an initial draft in February. He expected it to be rejected, which it was, noting in his diary that “the boys, in my script, have been caught in-flagrante, become involved in dubious political activity, dressed as women, committed murder, been put in prison and committed adultery.” This script is referenced in Stephen Frear’s film on Orton Prick up Your Ears (1987). See my review above.

(5)Any upstanding gay boy in New York in the 1960s and 1970s knew that nearly all the gay bars and clubs were Mafia owned.

(6)Richard Lester directed the film version of Stephen Sondheim A Funny Thing Happened on the Way to the Forum (1966), starring Zero Mostel, Jack Gilford, and Phil Silvers, with a cameo appearance by Buster Keaton.

(7)Among Googie’s numbers is a song from West Side Story. You can imagine what she does to her Cole Porter songs she sings.

(8)As a card-carrying gay boy in New You in 1969, I was told by many friends that Namath was a regular patron of gay establishments such as Julius’ and other such bars.

(9)By putting this phrase in quotations I am suggesting that my statement is ironic, the opposite of what it seems to be saying. Such linguistic usages are often used in gay camp talk.

Posted by greenintegerblog at 12:27 PM