now you are my age

Italian filmmaker Salvatore Samperi’s feature Ernesto has to be one of the most ravishingly beautiful LGBTQ films ever made, as well as one of the most complex portrayals of a young gay boy on the cusp of adulthood, and for those very reasons may also be one of the most frustrating of queer movies. In the Trieste post-World War I environment of this work there are no happy endings for the titular hero of this tale, Ernesto (the breathtakingly beautiful Martin Halm), his first older lover, a day laborer who is given no name (Michele Placido), or for the even younger boy Ernesto later seduces—or who seduces Ernesto, depending on your interpretation of events—Ilio (played in drag by Lara Wendel).

Working as a managing assistant and accountant for his wealthy Jewish uncle Giovanni (Francisco Marsó), in whose home he also lives along his mother (Virna Lisi) treated almost like a servant for her transgression of marrying a gentile who has abandoned her and the son, Ernesto is a seemingly precocious child who has early on recognized his own sexuality agreeing soon after hiring him to meet a laborer for a sexual encounter. 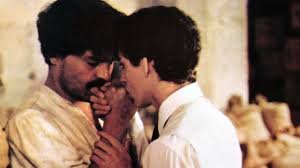 By the time they actually connoiter, the stableman (as the script labels him) has already fallen in love with the boy and elaborately discusses with Ernesto not only his love but how he refrain from hurting him, allowing the Ernesto to stop the process at any time it begins to hurt too much. The two meet up several times after, the worker even purchasing from his paltry pay of 1 florin a day, sweets and the 1911 version of Vaseline for his young lover. 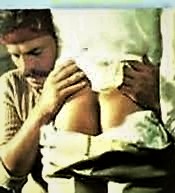 For his part, Ernesto appears to be a kind of rebel, insisting that he is a socialist—admittedly to irritate his hated employer—and blithely ignoring his uncle’s demands and admonitions. When his uncle determines to give up smoking, he absconds with the cigar case, presenting it as a gift to his lover. And when his uncle chastises him for having taken a hackney on his way to collect a company debt, he accepts Giovanni’s walking stick as a sort of gift to help him move about town in the manner which his uncle has demanded—on foot

There is, in fact, a great deal of humor throughout the early part of this film with regard to Ernesto’s endless posturing as he pretends to obey yet utterly ignores the rules set up around him not only by his uncle and aunt, but by his ex-school companions—Ernesto has clearly dropped out of school in order to work at his uncle’s warehouse—who keep insisting that their virginal friend must find a woman or, at the very least, visit a prostitute.

Ernesto is almost charming in his often smug disobedience of societal conventions, appreciating a similar action by his older friend who, when after Ernesto has been in bed ill for a few days—a condition triggered by his over-consumption of alcohol with those same schoolboy friends—the worker visits him at home bearing a message purportedly from the warehouse, but actually simply seeking an opportunity to make contact with his younger lover.

Soon after, the boy attempts to show off his older lover in a kind of public outing as the worker accompanies him on a boat which he has rented. But mostly, Ernesto ignores his friend, giving little evidence of their romance, despite the fact that he intensely shares eye contact with another nearby boater, whom we later recognize to have been Ilio. If Ernesto may seem to be flaunting convention in his public outing, we also recognize that he has chosen a location, as they skim across the waters, in which no one might truly recognize them.

In fact, we quickly begin to doubt the boy’s rejection of the norms. When he overhears a discussion his uncle has with a relative that a business colleague has been discovered to have been having a secret affair with his male servant, the gossip suggests that under the circumstances such a man has only one way of redeeming oneself from the public scandal, to kill himself, which evidently the man had already accomplished.

Upon overhearing this, the young rebel hesitantly determines finally to visit the lovely prostitute he has seen leaning from her window, yet, interestingly, he does not return even though, having paid her far too much for her services, she insists she will keep his money for payment of further visits. 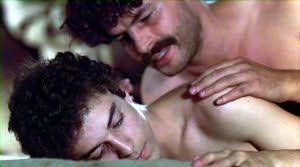 Finally, Ernesto reveals his true commitment to the status quo when, arranging for one last meeting with the day laborer, he demands that they turn the tables so to speak, the boy fucking his older friend instead of receiving his attentions. The worker has become so enamored with Ernesto that he agrees to what surely must, within his working class codes, seem demeaning. Pulling down his pants, he leans over the piles of sacks he and his friends have spent their lives unloading, to await the boy’s penis. By the time he looks around to witness his lover’s face, Ernesto has disappeared, never to return.

Unable to face the sexual situation that he himself has helped to create and certainly enjoyed, he delivers a letter to his uncle announcing his resignation from the job. Long committed to playing the violin, Ernesto is now determined to devote himself to further studies or perhaps even teaching younger pupils.

Furious with the turn of events, Giovanni demands a meeting during which they share a conversation that is crucial to our outstanding of the events that lie ahead. The angry uncle rushes up the stairs to his nephew reprimanding him for trying to “teach him something”: “You can’t teach me anything!” he shouts.

When he calms down, he asks the boy whether or not he wants to leave because he feels “trapped here,” a statement with which the boy concurs. Pacing, his uncle acknowledges that he too feels trapped. “And I hate everything in here. The letter book. The sacks. The apprentice. ...I’ve been stuck here for 40 years.”

“Why didn’t you go?” asks his nephew.

“Go where? Where does one go?” He admits he has long been playing the stupid boss, allergic to mothballs and cigars, just to amuse Ernesto. What does the boy want to do with his life?

“Things that would surprise you,” argues Ernesto.

Becoming a violinist? The uncle doubts his success, suggesting that after his travels and his adventures he will come back.

“What would you do if you were my age?”

“I forgot, when you’re young you’re sure of yourself. Don’t worry, you’ll come to a halt all too sudden. Perhaps sooner than you think.”

In some respects it is a commonplace discussion played out in hundreds of such conversations between the generations. But in this instance, with the older and bitter man facing the handsome, white-suited boy of so many talents it appears to be particularly bitter, in part because we now recognize that Ernesto is not truly a rebel, and cannot survive as a being working out of the system.

The whole scene recalls, to some extent, the work of another Italian writer, Alberto Moravia, whose book in the hands of director Bernardo Bertolucci became a study of another young man who grew up in an environment which did not conform to the society and later became a nearly desperate “conformist” before finally having to face the implications of his rejection of the past.

In Samperi’s interpretation of Umberto Saba’s fiction we almost feel, after this bleak prognostication of the hero’s future, that Ernesto may indeed escape normative life, particularly when, at a violin concert, he meets the beauty Ilio who hires the older boy to teach him violin, while simultaneously seducing him into his bed. 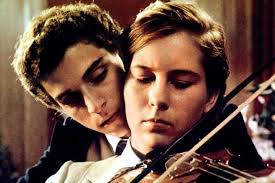 Given the freedom this child of 13 is allowed by his doting mother and father, it appears that Ilio and Ernesto’s relationship might have been easily permitted until they the younger boy was of age, and might have developed into something that would free both of them from the ever tightening coils of this dying society.

The problem is that Ilio also has a twin sister, Rachele (also played by Wendel) who knowing what is going on between Ilio and Ernesto, determines to also seduce the violin teacher. Somewhat as in Harold Prince’s film Something for Everyone—a film released coincidentally the very same year as Bertolucci’s The Conformist—the ménage à trois might have succeeded, particularly since, as the twins insist, they used to dress up in each other’s clothes successfully eluding the detection of even their parents on every occasion.

Yet as the elder Luzzatis begin to notice the interest of their daughter in the good-looking violinist, they take things into their own hands, and—before any of the three younger beings can work out the tensions involved in their shifting relationships—determine to announce their permission for Ernesto and Rachele to marry.

The spin of events immediately wins the approval of Ernesto’s family, the Wilders recognizing that the Luzzatis represent more wealth and aristocratic credentials than do they, and accordingly they further push Ernesto into the whirl of parental ambitions.

As he is about to be driven away in an open carriage to the party, Ernesto is met by his earlier lover who humbly greets him, “Ernesto, how are you?” Ernesto pretends not to know him, handing him a florin, which the worker, almost in tears, passes on to a nearby urchin playing in the streets.

At the affair itself, the somewhat late-arriving future groom looks wan, seeking out Ilio who in anger has previously stormed off. He chats once more with his uncle who reminds him of the boy’s earlier question: “What would do if you were my age?” Giovanni continues, delivering one of the most terrifying lines perhaps ever spoken to a young man: “Now we are the same age.”

A few moments later as the celebrants toast to the couple’s relationship, Ernesto turns away from them to look directly at the camera, closing the film with a ridiculous shrug of his shoulders.

The New York Times critic Lawrence Van Gelder, writing on the film in 1983 when it was released in the US, argues “when Ernesto turns wordlessly toward the camera in the midst of his engagement party...[he]...indicates that neither marriage nor the years to come will subdue the rebel within.”

For me, however, that shrug seems not at all to be an indication of his would-be rebelliousness but rather a gesture of his acceptance of fate, as if to suggest, “what can you do?” If I would like to imagine that Ernesto is hinting at an attitude of possibility as in “we’ll see,” given his previous actions we have witnessed he is what his former employer has confirmed: Ernesto is a conformist who one day as an old man in the future is destined to look back, like Giovanni, with regret for having denied his love of Ilio and the working friend both.

Ernesto, like Clive Durham of E. M. Forster’s Maurice who lived through the very same period portrayed in this film, sacrifices his sexuality to societal acceptance and approbation. This young man will never feel the need to put a gun to his head, for he is already dead.

Posted by greenintegerblog at 2:26 PM