Sigmund Lubin | Meet Me at the Fountain

Sigmund Lubin (screenplay and director) Meet Me at the Fountain / 1904

A French nobleman, determining finally to marry, posts an advertisement in an US newspaper in hopes of finding a rich wife. He asks possible candidates to meet him at the fountain in a well-known park (ironically, Grant’s tomb). 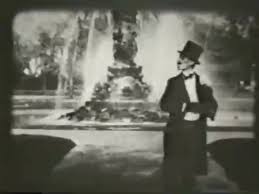 For a few moments he stands alone in front of the fountain with only a woman pushing a baby carriage passing by. Obviously, in a good mood, the man briefly attempts briefly to diddle with the child, the mother or nanny, immediately offended, scolding him and hurrying off.

Soon one of the women “candidates” appears, another quickly following, before another and another and, ultimately an entire army of would-be wives. The gentleman, suddenly realizing his dilemma, determines to flee 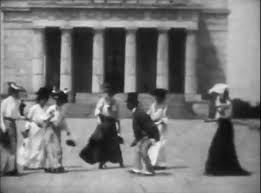 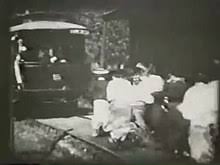 And so the chase begins as the man, attempting to escape the women, struggles to rid himself of them by presenting them with various obstacles—a fence, stairs, a small cliff, a streetcar, and a tree onto he climbs out on a limb—all seemingly unnavigable to the hopeful brides dressed in their turn-of-the-century long skirts and several layers of undergarments. Jumping, hopping, bending, climbing, and simple running does not at all daunt these devilish damsels.

We have long ago spotted the ugliest of these women following up the pack. And when, out of desperation, the count dives into the river, the last arrives first to help him climb out, claiming her prize.

She happens to be the famed transvestite performer, Gilbert Saroni, who, in the film’s last scene is dressed up as a bride standing next to her groom, the nobleman. The two men turn toward one another and French kiss. 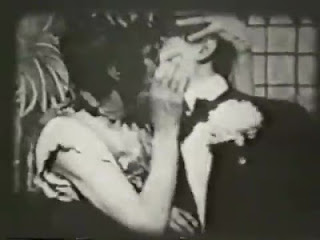 Surely this was the first representation of two men marrying on film—one of them perhaps transgender—but it certainly was not the last. Just a few months later, Edwin S. Porter released on his Edison label How a French Nobleman Got a Wife Through the New York Herald Personal Columns, basically a repeat of the earlier film with a few refinements.