Stanley Jackson (screenplay, based on a story by Sinclair Ross, and director) Coronet at Night / 1963

The Canadian short film of 1963 Coronet at Night, based on a story by Sinclair Ross, ostensibly has nothing whatsoever to do with being gay and most certainly does not represent or even suggest anything that might represent sex.

To put it simply, and this is a remarkably simple tale: a young farm boy Tom is sent to town—his father being intensely involved in mowing the hay in a year of a substantial bounty of his major crop—to hire a man to do the important job of hay-stooking, a process of setting the sheaves upright and shaking and packing their mix of wheat, barley, and oat leaves into an upright position so that they can properly dry out in the sun. 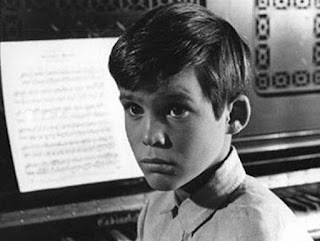 If his hard-working father is a sometimes harsh disciplinarian, Tom’s mother is an obsessively religious woman who encourages her son to play the piano and to love music probably because he may use his talents in church. Happy to be free from their clutches for a day and allowed to skip school for the task, he journeys to find the small Saskatchewan, one-street prairie town nearly empty, with almost everyone  at home to reap their crop.

In the local drugstore where Tom spends the 30 cents his mother has given him for lunch on a chocolate malt, a man sits next to him, a pale-skinned blond, whose hands are smooth, obviously not someone worth hiring for the demanding farm work. But when the boy begins to talk with the stranger he discovers that the youth plays the coronet in a band, and it’s love at first sight—if more for the shiny instrument that musician takes from its case than for the blond’s gentle smile. And, although the musician has never done any farm work, and probably plays in a jazz band rather than what Tom imagines is a marching band, the boy proudly brings his new-found friend home, while also recognizing that the newcomer is not at all the kind of man his father might have hired. 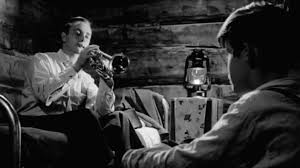 Over the one night and one day that the musician lives in the bunk-house, spending the early evening with Tom in rapt attendance while playing several lovely trumpet tunes, Tom falls in love, this time with the player and not his instrument. He even plans to rise early to help teach the new worker how to “stook” before he leaves for school; and all day at school Tom is worried, hardly being able to wait to get home and check out his friend’s achievements.

When he discovers the fields only partially finished, with most of the stooks still remaining parallel to the field, he knows the coronet player has failed, and when he reaches the house his father tells him, more gently than the boy might have expected, that the man tried hard but became winded and ill. The father is momentarily taking him back to town and suggests his son say goodbye, the musician suggesting that they may meet up again the next year. As Tom recognizes, however, his new love is about to leave his life forever, as the boy looks on in inconsolable sadness as the horse-cart with his father and the man retreat into the distance.

He narrates, however, that his music-hating father still remembered that particular year of getting in the crop, and continued long after to occasionally wonder whatever happened to the coronet player.

So this Truman Capote-like memory of a special day ends, the narrative having expressed a treasured memory of a young boy’s coming of age. Certainly, that is the way most early viewers, I am sure, will read it.

By this time, however, my readers must realize that I will not leave that simple and blandly nice narrative alone. Even the most literal of viewers might grant me that this is not just a tale out of a child’s mental diary, but a statement of adulation and even love for a being who stands totally outside of his world representing ineffable desires for what he is not even yet know exists.

The genre here is not merely another “coming-of-age” story—although even that now often connotes, in LGBTQ speak, the story of a young man or woman coming to terms with his or her sexuality or gender.

More than any other work in this volume, this film shares in the genre I described in my comments about Shane, and bears some resemblances to other such “boy and his older male pal” works I pointed to in Billy and His Pal (1911) and Rebel without a Cause (1955), although the last two are far less innocent, simply because of the ages and gender of the characters involved.

In Shane, however, the boy’s—and other family members’—admiration of the stranger who has come to work for them has only subtle tones of homoeroticism, while in director Stanley Johnson’s fable it is far more explicit.

Forget the fact that when Tom asks the blond stranger early on in the story whether he had ever “stooked,” that in his Canadian-accented delivery of the Scottish-derived word it sounds eerily like he is asking “Have you ever stooped?” which means “to lower one's moral standards so far as to do something reprehensible” or, in basic Yiddish calls up a related question “Have you ever shutpped,” which asks if the man has ever had sexual intercourse. The trumpeter cracks a sly smile before answering “No, but I can learn,” the scene playing out a bit like one of the oldest of vaudeville skits.* But, as I’ve requested, I ask you just to ignore that aside.

Any card-caring gay man would nonetheless recognize the new man in town as a homosexual simply because of the clues the writer provides us: the man is fair-haired, pale, smooth-bodied, and sickly, in short, a faggot from the city who has none of the rough and experienced look and mannerisms of Prairie boys and girls his age. Furthermore he can beautifully play his instrument, which translates easily in gay camp lingo as suggesting that he is more than sexually adequate.

What young Tom immediately sees in this man, enough to want to bring him home to meet his mother and father, is the kind of being he recognizes that he too may grow up to be. The child’s gaze of the man playing the trumpet signifies his absolute pleasure in being momentarily exposed to a new world that he has never before imagined, a world in which he desires to live, even if he subliminally recognizes that is not yet possible.

Just as in Shane, moreover, Tom’s parents seem also altered by the stranger’s visitation. Without the bodily sexual potions Terence Stamp brings the family in Pier Paolo Pasolini’s Teorema (1968), the blond boy of Coronet at Night brings the boy’s mother the pleasure of his music and his father something in the stranger’s gentle demeanor that forces the young Tom to recognize “That something had happened. I knew my father had understood something.” Metaphorically speaking, we wonder whether perhaps Tom actually might have brought home a man he loves who they can also love and accept, someone not in the present, but in the boy’s future perhaps.

I realize many will believe my reading of this film to be prurient. I don’t see it that way, but I do comprehend their response.

I can only say that it came with no great surprise, however— having written the above I chose to do a little research about the man who wrote the original story on which this short is based—to uncover significant corroboration of my reading.

Sinclair Ross, born in Saskatchewan in 1908 worked as a banker for The Union Bank of Canada most of his life, while also writing stories and novels, the most famous of which, For Me and My House (1941) became a Canadian literary classic, establishing a model for Canadian prairie fiction.

After Ross died in 1996, biographer Keath Fraser revealed in a study of the novelist, As For Me and My Body: A Memoir of Sinclair Ross (1997) that the author had been a closeted homosexual.

*The acting in this scene alone makes me wish the director would have listed the names of his actors in the credits.