If Tom DeCerchio’s short, 18-minute film is centered upon a message to those who strive to attack members of the gay community, yet it is nonetheless quirky enough—at times almost surreal given its central character’s mother and his own delusions—that we don’t feel this work as being heavy-handed in the least. Over-acted perhaps, a bit too dark in its earlier scenes that end up with almost comical results, but never overstated. Like its title, Nunzio’s Second Cousin lives in a kind of fantasy no-man’s-land which delights us more than teaching us its obvious message: gay-bashing is a dangerous activity.

The narrative begins as two macho men, one dressed as an S&M leather boy, the other simply a hefty man who can clearly hold his own in a good fight, leave a Chicago bar, kissing and fondling one another as they walk down the dark street.

Spotted by a gang of young high school gay-bashers, clubs in hand, they are attacked. But within an instant the attackers become potential victims as the heavier-set man, Tony Randozza (Vincent D’Onofrio) pulls out a gun, demanding the boys line up and hand over their driver’s licenses. 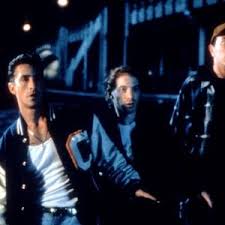 The boys, all from Cicero, have just unknowingly attempted to accost a police sergeant who could easily arrest them for battery and assault if not for a hate crime if doing so would make it clear to his fellow police buddies that he is queer. Consequently, he forces the men instead to recite in unison “Gay people are nice people” and other such lines, including a commitment to never attack a gay man again.

Before he lets them go, however, he pulls the most handsome of the bunch, Jimmy (Miles Perlich) who is clearly their leader, out of the line and demands that he accept an invitation for dinner at his house the following evening, threatening that if the boy doesn’t show up he’ll round him out for more severe punishment.

The boys run off, Jimmy promising to keep the appointment, as Tony’s date, Levon (Harry Waters, Jr.) laughingly pleads they too hurry off to consume a big steak.

In some respects this entire scene reminds me some of the gay-bashing scene in PJ Castellaneta’s 1998 film Relax, It’s Just Sex when one of the gay men attacked by bashers turns the table, fucking one of the terrified boys who attacked him. Indeed we almost wonder whether Tony might have something like that in mind for the cute kid when he retorts: “Sometimes fags bash back.”

As the following day’s dinner time approaches we see Tony in his home with his queer—in the more traditional meaning of that word—mother (Eileen Brennan) who has spent the day cooking for the event, delighted that her son has finally invited one of his friends to the house. When he provides her with the last name of Jimmy, Serantoni, she recalls once knowing a Nunzio Serantoni, and quickly convinces herself that Nunzio must be the boy’s second cousin.

The boy arrives on time and, strangely enough, is treated like a special guest, with Mrs. Randazzo serving up several courses and demanding he eat everything on the plate. Yet each time she returns to the kitchen, the implications of Tony’s conversation grows darker, questioning, at one point for example, whether or not the boy might have wondered if he was going to fuck him, responding: “We’ll save that for after the meal.”

Later Mrs. Randazzo, observing that Jimmy is athletic looking, leads the kid to respond that is on the wrestling team. “No kidding, so was Tony. Oh I was so proud of him the way he used to jump on all those boys.”

When the mother leaves the room Tony confides, “You know, I think when I was on the wrestling team and all those boys were rubbing against and I was rubbing against them, that’s what made me a homo.”

At another point, when Tony’s mother asks her son about a date he had the evening before, she asks, “Was she a nice girl?” When she asks him to bring the girl around, he says he will, that he might even marry her someday, breaking into a hearty laugh and prodding to see if Jimmy also doesn’t think it’s funny. 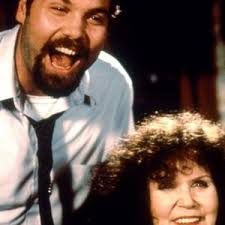 Unpredictably, he turns almost violent again, demanding that Jimmy tell her about his date, and when the boy demurs, he slaps him and insists to his mother that “Jimmy has something tell you about me.”

The boy wiggles out of the dangerous corner by finally responding, “I was the wrestling team captain.”

In a sense, this scene plays like a slightly less clever and menacing scene out of a Harold Pinter or even Edward Albee play. We are most definitely, if nothing else, in game-playing territory, a world just as perverse as were Jimmy’s own actions the night previous.

The meal finally comes to a end after a desert of cannoli, with Mrs. Randazzo insisting that her guest take some of the desert leftovers home. Tony tells his mother that we will walk the boy out, and exits the house where he once more confronts the delinquent, holding on to the youth’s athletic jacket, “I got news for you Jimmy boy. Bashing fags ain’t going to stop you from becoming one. Trust me, I tried it,” He kisses the boy intensely on the lips and pushes him to the ground, the sweet’s ricotta, cream, and chocolate mix now plastered upon the wrestler’s cheeks.

Tony, it appears, has fucked the boy over more certainly than if he had literally raped him. For the rest of his life Jimmy will now always wonder about his own sexual identity.

Posted by greenintegerblog at 2:10 AM