If LGBTQ films are to be believed, drugs and alcohol seem to have been part of the scene from the beginning—as least as early as Sidney Drew’s A Florida Enchantment (1914), Alfred Hitchcock’s Champagne (1928), G. W. Pabst’s Pandora’s Box (1929), Josef von Sternberg’s Morocco (1930), Norman Taurog Sunny Skies (1930) (the last named film of particular interest since, like the movie I’m about to review it is centered upon college students), James Whale’s The Old Dark House (1932), and Reinhold Schümzel’s Viktor und Viktoria (1933) leading up to the works of three decades later such as Luchino Visconti’s The Damned) (1969),  William Friedkin’s The Boys in the Band (1970), Stan LaPresto’s Sticks and Stones (1970) (and for that matter any film using Fire Island as its locale), Frank Ripploh’s Taxi to the Toilets (1981), Herbert Ross’ California Suite (1978), Paul Bartel’s Scenes from the Class Struggle in Beverly Hills (1989)—and the vast majority of movies made after 1990.

Amid of the two periods I randomly scanned for movies with heavy drug and alcohol use, 1914-1933 and 1969-1989 stands a short 10 minute film shot by then New York University students Warren Sonbert and Wendy Appel who in 1966 filmed a NYU apartment party, using handwritten title and credit cards, titled Amphetamine which was simultaneously a gay movie. After that film, Sonbert with and without his early collaborator, went on to do many cinema pieces, most of them experimental in nature, involving radical uses of montage and collage, without obvious gay content, but nonetheless fascinating for their audacity of their cinematic perspectives.

In the late 1960s and early 1970s amphetamines were a popular drug among students, particularly milder forms of Speed taken as a tablet.*

But the students in this film use a much stronger version which they inject, most probably for its renowned effects of increasing the sex drive.

The film begins and continues for first half with background music by The Supremes singing, two times, their recording of  “Where Did Our Love Go?”:

Ooh, please don't leave me all by myself

I've got this burning, burning, yearning feelin' inside me

Ooh, deep inside me and it hurts so bad 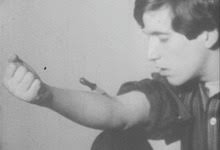 The first five minutes of this film are scenes in which the party-goers, in particular the central characters played by Gene Dawson and Tommy Mitchel migrate, along with others, to a table littered with beer cans set against the apartment wall, to suck up some of the drug in a syringe and carefully drip it into onto a spoon before mixing it with another fluid, perhaps water. They follow by taking off their pant belts, tightening it around their upper arms and injecting the mix into their veins. The entire scene is played out as if it were a common and ordinary activity—which apparently for these boys it is.

When most of them have finished with the injections, the camera shifts its focus to vertical striations of light (a suggestion of the drug’s effects?).

The music stops, and there is a pause as the camera momentarily goes black. A record drops, and a second song by the Supremes, “I Hear a Symphony” begins playing:

For a feeling that's so new, so inviting, so exciting

Whenever you are near, I hear a symphony

A tender melody pulling me closer, closer to your arms

Then suddenly, oh, your lips are touching mine

A feeling so divine 'til I leave the past behind

I'm lost in a world made for you and me

The striations continue for a few moments before the two lead figures are seen standing, mid-room, intensely kissing, running their hands across each other’s legs and butts. 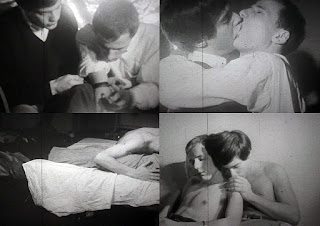 The camera pans away for more vertical patterns of light catching the two, as if out of the corner of its lens, now lying on the floor in a deep embrace. A moment later they sit, with their shirts removed, with one kissing the shoulder of the other but with a blank look upon their faces.

We observe others in the room disinterestedly smoking without even attempting conversation. Suddenly we see one of the couple, now dressed, close the Amphetamine bottle, pick up his coat, walk down the hall, and leave, just as first song has begged him not to.

We have no idea what might have happened. Did they finish sex, did they argue, or did they simply get tired? Clearly, the party’s now over, the rush of the drug and the excitement of sex having now washed over their bodies as they return to their own small apartments to sleep for a few hours before the next morning’s lectures.

If they did, in fact, have sex we wonder was the sex more intense? Was the sexual release worth their shooting up? Their faces do not give us even a clue. These gay boys seem utterly dispassionate at the very moment that The Supremes’ song almost literally shivers with pleasure. The difference between the two perhaps says everything we need to know about the evening’s events.

* My companion Howard and I tried Speed in capsule form a couple of times while trying to write final English papers, but discovered that we talked so much to one another that he lost track of time and wasted the focused energy we believed we possessed, although I do recall writing some chapters of my Master’s Degree thesis on Eudora Welty on the drug.

Posted by greenintegerblog at 3:37 AM