the shape and size of it

William Branden Blinn (writer and director) Thirteen Minutes or So / 2008

William Branden Blinn’s 14 minute film, Thirteen Minutes or So—without the credits, Blinn’s film is probably 13 or so minutes—begins where many LGBTQ movies end, with the couple having consummated a hot night of sex. But then, superficially, since this is a Q movie, not LGBT-centric, maybe it needs to look at what has happened between these two handsome men, Lawrence (Nick Soper) and Hugh (Carlos Salas), through the lens of the past tense. Both have presented themselves a straight men, and even after their sex, maintain they that they are heterosexuals. 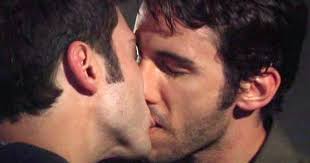 We discover, in fact, that their conversation the night before had begun by talking, as heterosexual men are evidently prone to do, about “pussy” and how, as true he-men, how they like “to eat pussy.” Their conversation moved on to a brief discussion of their hometowns, Fort Wayne, Indiana in Lawrence’s case and Salinas, California for Hugh. I might imagine how such a conversation disintegrated into a chat about the towns of their favorite football or baseball teams...and whatever else straight men find so fascinating to create a friendship. But in this case, Lawrence invited his new friend up to his room to show him a website on...(he gets vague even  discussing it) “the size and shape of different....how our anatomy perfectly fits....” Presumably we’re speaking of vaginas, but Lawrence cannot finish his sentences, so disturbed he is about “what just happened.” 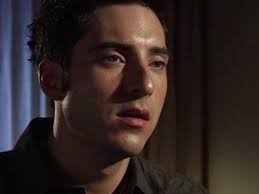 As Lawrence claims, he doesn’t even jerk off, living as he rhapsodizes in an alternative space better than.... He evidently hasn’t had sex with a woman for a long while either. But he has...has had girlfriends. Hugh also had a girlfriend...has had many girlfriends in the past. And has never done it with a.... He’s never even imagined it. He’s never had the opportunity, never been attracted to....

In this short film, the two males speak in ellipses, being unable to explain what has just occurred between them. They can’t finish their sentences just as they can’t apparently continue with their relationship, their new-found friendship...whatever they might wish or not wish to call it. Lawrence in particular is startled by the facts, even though Hugh reminds him that he actually began it, and both of them “sealed the deal,” French-kissing and intensely caressing one another before what may or may not have been simply mutual masturbation...or maybe something more complex. Certainly, the moans and groans of pleasure we hear emanating from the dark as the opening titles scroll sound like they’re engaged in something deeply passionate.

More importantly, Hugh admits not only that he “liked it,” but would do it all over again,  going even further my admitting that it was a something incredibly real that he has never before experienced with another man. Lawrence, grasping at straws, wonders whether their drinks weren’t spiked, to which Hugh sarcastically responds, “you think somebody slipped something into our water?” “I was drinking coffee,” Lawrence struggles to explain things to himself. “You liked it?” he asks once again, incredulous of the fact.

Trying to seek a way out of the consequences, Lawrence says “We’re just not wired that way.”

Before, I might have agreed with you, responds Hugh, but now....

“I haven’t had it in a while. You’re so very good looking. You seem so normal.”

“I am normal. And so are you,” Hugh explains, however, that there’s something that overrides the rules, as he puts his hand upon Lawrence’s heart.

“My heart.” Evidently their long conversations together went to a lot of places to which they are not willing to return to after their sexual act. “I think I know you pretty well now.”

Hugh describes how in his room Lawrence described how his cat would come to sit on his chest and as it began to purr his heart would swell, and as the cat continued his heart would swell bigger. He felt, so Hugh claims, as if he could feel is own heart swelling, and then...”you were all over me.”

Lawrence, who has been busy dressing through much of this conversation as if to make a hasty retreat, now pauses to repeat “You’re so handsome.” 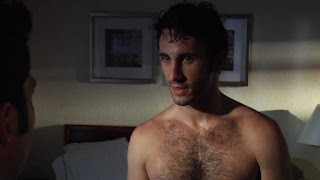 “You’re beautiful and amazing. But dude, that’s my shirt.”

As Lawrence looks down and slowly begins to unbutton it, Hugh pulls Lawrence’s face to his neck. “This is nice....” his friend sighs.

If Blinn’s charming recreation of the natural attraction of two straight men to one another seems, at moments, a little too much like a gay fantasy textbook to be totally believable, I do think as these two good-looking hunks stand once again at the threshold of a leap into bed and Nicola Quilter’s song “Sleep Wake Dream” accompanies the ending credits that—as Rick Blaine utters to Captain Louis Renault in Casablanca—“this is the beginning of a beautiful relationship.”

Posted by greenintegerblog at 7:37 AM