William Haddock | Billy and His Pal

We’ve seen dozens of films of this genre: a young boy looks up to and admires an older man who becomes an idol for the youth. This was, indeed, one of the central themes of cowboy buddy films which often bordered on the homoerotic with a soupçon of pederasty. Even otherwise totally innocent films such as Shane are totally comfortable within this trope. But with just a little bit of scratching we can see it clearly for what it is, a sublimated desire to be closer to or in a deeper relationship with the hero, symbolically “marrying” the other in the attempt to take on the values and mannerisms of the beloved mentor.

One of the strangest works of this genre, however, occurs early on US film history in William Haddock’s 1911 Billy and His Pal. Either in order to attenuate the sexual implications of such a male-male relationship or even, rather perversely, to accentuate them, the hero of this short film of 15 minutes is played by a woman in male costume, Edith Storey who idolizes the cowboy Jim (Francis Ford). 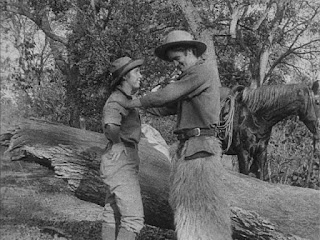 Filmed near San Antonio, Texas this film tells the tale of Billy—who the intertitles, obviously by mistake, is referred to as Bobby—who, basically happy to serve simply as the lanky cowboy’s gofer, is sent to the local general store to pick up some tobacco.

Just previously, Billy/Bobby has witnessed Jim saving a young woman from the unwanted attentions of a dark-clothed Mexican as she attempts to mount her horse, and now, at the store the boy overhears the resentful man plotting with others to do Jim in. Quickly purchasing the pouch, the boy rushes back to tell his hero of what he has just learned.

In the meantime, however, Jim has been tied-up and kidnapped by the gang who drags the cowoby to a crag at the bottom of a cliff with the intention of dropping a huge rock from the cliff-top upon his body below.

Billy arrives back to the spot where he has left his pal, discovering him missing with only a discarded tobacco pouch and a hat of one of the malefactors left behind. Hurrying into action, Billy/Bobby rushes to a nearby ranch, evidently owned by the woman to whom Jim has previously attended, rustling up a posse of cow-punchers and explaining the situation to Jim’s woman friend.

Anxiously, they rush to the spot to which Billy has sent them, saving Jim just as the huge boulder comes crashing down from above. They round up the Mexican villains and send them off to their deservèd punishment, while Jim returns to courting the woman, leaving his younger pal alone and disconsolate for having lost his best friend by saving him.

Who wrote this obviously racist tale is unknown, just as we are today uncertain whether or not Haddock directed it. But the company that produced it was not American but of French origin, the story of which is worth mentioning.

“At the dawn of the 20th century, the films of French filmmaker Georges Méliès were among the most popular in the world. And the most pirated. Unscrupulous American film studios regularly took Méliès’s films, obscured his trademark, and sold the works as their own.

Méliès sent his older brother Gaston to the United States to enforce his copyrights. Gaston arrived in New York in November 1902 and immediately placed an ad in the trade papers announcing his uncompromising attitude toward protecting his brother’s work, reading in part, “…we are prepared and determined energetically to pursue all counterfeiters and pirates. We will not speak twice; we will act!”

Eventually, Gaston began making his own moving pictures. In 1910, looking for a warm, sunny place to film during the winter, he moved his company to a farmhouse in San Antonio, Texas, near a health resort called Hot Wells Hotel. The makeshift studio was dubbed the Star Film Ranch and over the next year the company made more than seventy one-reel films, westerns, comedies and romantic tales of old Mexico. Some were released as Méliès Star Films and others—including this one—were released under the name American Wild West Film Company.”

In 2010 this one-reeler was discovered in New Zealand where it had apparently been re-issued for a British Commonwealth audience as Bobby and His Pal. Restored, the film now represents only one of five of those produced by Gaston Méliès’ company.

Posted by greenintegerblog at 5:02 AM