Andrew Herbert | Song of the Loon

It’s 1877 and fur-trapping backwoodsman Cyrus Wheelwright (John Iverson) has just returned home from a voyage upstream to find his native American lover Singing Heron sunning nude with a cowboy, John (Lancer Ward), who just happened to be passing through. Cyrus doesn’t really mind, arguing that, like his American Indian friends, he is not a jealous lover and believes in free love, while pondering that the handsome John reminds him of his former blonde-haired, blue-eyed cowboy heartthrob, Ephraim MacIver (Morgan Royce). Urged by Singing Heron to tell John the story, Cyrus recounts the history of his former “partner” around which this now-cult Western is centered. 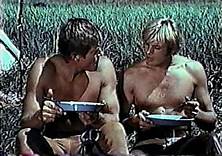 Much like he has just encountered John, Cyrus came home one day from a fur-trapping trip to meet the beautiful Ephraim camping out nearby. Having just broken up with his closeted lover, Montgomery (Jon Evans)—who, in turn, has hooked up with the mean boy-loving villain of the piece Mr. Calvin (Brad Fredericks)—the city slicker Ephraim is confused and depressed. Like most white men he believes in monogamy and is still love with Montgomery, despite the fact that his former lover would only have sex when he was drunk and would not admit to it after. When Montgomery spreads the news that his new friend has a whole bevy of boys to service him, the mean-spirited Calvin, believing Ephraim to be the source of the rumor, tries to kill him, apparently with Montgomery’s help.

Fortunately a local Astonia-dwelling native American who follows “the song of Loon” (the Indian phrase for those of their tribe who enjoy sex with their own gender) sends the poor boy to the tribal Indian Guru, Bear-Who-Dreams (Lucky Manning), who prescribes that Ephraim take “the journey” by first eating hallucinatory mushrooms before spending several days in nature totally in the nude. Evidently, it does the trick, freeing Ephraim from wanting anything else to do  with Montgomery and opening him up to free love, particularly—after the growing attachment he has already established with Cyrus—in the waiting arms of this backwoods charmer, the two joyfully building a cabin together just in time to spend the winter shacked up in bed.

Sadly Calvin has fallen in love, meanwhile, with the still closeted Montgomery. Getting drunk, Calvin finally publicly admits that he is in love with Montgomery, who, still terrorized by his deeply-hidden desires, denies the relationship, ending the film by trying to slug it out with Calvin in a kind of drunken showdown of a wrestling match in the middle of main street—which we’re almost certain will end up in sex if it doesn’t send one them off to the cemetery first. 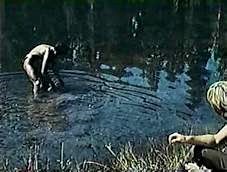 This feature film, Song of the Loon, with its truly queer mix of epic naturalism (both white and red-skinned nudes filmed in sepia-toned and negative-reversed images as the camera abstractly caresses their intertwining arms and legs, as well as their exposed buttocks) combined with a plot seemingly spun out of urban hippiedom philosophy might have been marvelously funny if it weren’t for the fact that director Andrew Herbert and screenwriter Richard Amory, on whose novel this work is based, weren’t so terribly serious. It’s almost as if the French cineaste François Reichenbach (see my essay on his Male Nudes of 1954 above) had inexplicably hooked up with Zane Grey to face off at high noon with Bernardo Bertolucci and Rainer Werner Fassbinder. 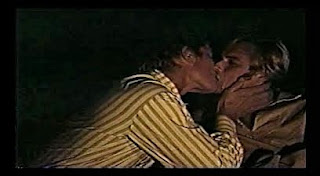 In most respects, amazingly, Herbert’s homespun innocents are more straight forward about their sexual desires than are the central tortured characters of the Bertolucci and Fassbinder films of that same year. And while the latter directors’ films are vastly superior in both cinematic and literary terms, there’s something almost giddy about the truth-telling cowboys-and-indians trope of this truly looney concoction. Serge Goncharoff’s musical score is even quite impressive. But I’ll bet anything that Herbert never even heard of Jean Genet! And the closest thing Amory has seen of leather is a pair of brown buckskin pants.

Sex has never been so squeaky clean as it is in Song of the Loon, but it’s utterly honest about it’s faith in “out-in-the-open field” gay desire. Denial leads to violence, this works shouts out; running naked in nature leads only to love. And who can argue against that?

Posted by greenintegerblog at 3:48 PM