On paper the plot of Canadian director Atom Egoyan’s 4th feature film, The Adjuster (1991) sounds like the most perversely surreal movie ever made, an complete artifice that requires, more than simply its audiences’ suspension of belief, a complete immersion into a sexual planet that includes everything from the worst of what is imaginable in porn films and the most outlandish of voyeuristic and exhibitionist fantasies, to romantic straight and gay liaisons performed by one seemingly nice guy insurance adjuster. To actually attempt to describe the narrative is a little bit like trying to outline a mad mix of cinematic and literary works that one might encounter in the library of Dr. Alfred Charles Kinsey—which is perhaps why no film critic I read has done it very successfully, often confusing and misinterpreting what eventually is revealed as being pretty straight forward, even if totally unbelievable, after Egoyan’s rather clear presentation.

A.    Graphic or prolonged scene of violence, torture, crime, cruelty,

B.     The depiction of physical abuse or humiliation of human beings

for purposes of sexual gratification or as pleasing to the victim.

C.     A person who is or is intended to represent a person under the

age of 16 and appears

1.      nude or partially nude in a sexually suggestive content or text

D.    Explicit and gratuitous depiction of urination, defecation, or vomiting

H.  A scene where an animal is abused in the making of the film.

We’re never told why E and F do not exist, or if they do what they represent. And, to be fair, I do not know if there has anything at all to do with the real Canadian Censor Board. The offices, filled with overflowing bins of pornographic magazines and fliers which a staff of numerous others to attend to them, seems like something out of a sexual science fiction film in the manner of Roger Vadim’s Barbarella (1968).

Hera is clearly a very competent and committed worker, except for the fact that she inexplicably films the porno works she watches. When the genial and personable Head Censor (David Hemblen) is alerted to her possible infraction, she reveals that she does it not for her own enjoyment but to share her workday duties with her sister Seta (Rose Sarkisyan), who lives with her and her husband and watches the films all over again each evening, often with Hera’s young son Simon in the same room with her. She and Hera are close and have shared their every experience with one another throughout their lives.

One day on the subway Hera encounters a drunken derelict, an overweight disheveled being who at one point falls to the subway floor. While she passively watches another woman goes over to the drunk and sits next to him, slowly lifting up her skirt and guiding his hand to her crotch as he publicly masturbates her, she obviously fully enjoying the act.

These two, we soon discover are a wealthy married couple, Bubba (Maury Charykin) and Mimi (Gabrielle Rose) who, other than throwing lavish dinner parties, spend most of their lives planning outlandish sexual events that fulfill Bubba’s voyeuristic desires while Mimi is able to exhibit her lusty pleasures in the most public of ways possible.

For their next adventure, Bubba hires an entire football team along with their stadium so that Mimi can live out her cheerleader fantasies by having sex with each and every member from tight end down the line to guard, center, and quarterback.

But even earlier in the film we have seen Bubba scouting out a place for a new “shoot,” the strange suburban development in which only four large homes were built among many empty acres, only one of them having been sold and inhabited before the developers ran out of money.

From the evidence in the very first scene, we sense that Noah and Hera’s relationship is not a terribly close one, particularly since in the dark Hera seems to be moaning and shaking from some nightmare vision as Noah quietly rises to dress, having been called out to a house fire which he must investigate. He telephones her on his way to to fire just to check up, but she seems unappreciative for him having awakened her.

What we soon discover is that Noah’s job seems to consist primarily of him showing up to burning households to meet the owners whose whole lives have just gone up in flames. He asks them for photographs and complete descriptions of their every destroyed possession, but goes far beyond what the company might require by gently consoling them, often using the company mantra “You may not feel it, but you're in a state of shock.” To help them find their way back into the “real” world, Noah not only attempt to jog their memories in order to replace what they have lost, but offers most of his clients his own body, making love to beings who are temporarily without anything else in their lives.

At the local motel where he puts up most of his suffering customers he is known as a hero, not only by the motel’s operators and service workers whom he has helped to keep in business and employed but by his grateful insurance holders to whom he has provided new hope both mentally and physically. A bit like the beautiful family visitor of Pier Paolo Pasolini’s Teorema (1968), this more everyday angel offers the customers, apparently both female and male, young and old, far more than they might have imagined when signing up for their policies.

If we see Noah in bed with one of his newest female clients, we also witness those who are still waiting for the company payment seeking out his reassurances and caresses—at one point an older man holding Noah’s hand and kissing it like a mafia Godfather, and by the end of the film his most recent client, a photogenic Hispanic man named Matthew (Raoul Trujillo), laid out naked on the motel bed, having just had sex with the always ready-to-please adjuster. Through the film Egoyan represents him with a bow and arrow, a man playing cupid to his own self.

The clever movie-goer probably has already perceived that all of these figures, each in their own way, are different kinds of adjusters. Through her coding and the cuts her ratings result in Hera is adjusting what those addicted to pornographic sex can see and enjoy. Through their enactment of fantasies and later film-making Bubba and Mimi transform the sexual imagination into something closer to “real” life enactments; while Noah not only adjusts for the financial loss of the grievers’ previous possessions but helps them socially and sexually to readjust to life itself.

Yet it is their very differences in the way they affect people’s existence that explains the final ending of this “theorem/theory” film, a work which the director himself described as being about "about believable people doing believable things in an unbelievable way."

Hera, her sister, and her son live in a kind of passive world where images represent real actions for good or bad. Pornography is pernicious not just because it represents “violence, torture, crime, cruelty, horror, and human degradation” along with abuse of adults, children, and animals, but because it replaces real human action with representations of them. If nothing else, the real actions at least involve living beings and their bodies which is why even the representation of these acts are so atrocious. But for Hera the body does not even exist. We recognize that her and Noah’s relationship is empty, replaced as it has become by her observation of the most vicious visions of what human relationships consist.

Mimi and Bubba bring those pornography fantasies to life, nudging them, if nothing else, a bit closer to reality. The last great “performance” which they plan involves the lonely Render house itself, which they have rented out to the couple so they “play house” with a gathering of pre-teen boys celebrating a birthday party at which the scantily-clad Mimi apparently intends to introduce them to the pleasures of female sex. But this realization of mass child abuse is finally, at least if Bubba has his way, to be their final act.

Having rent out their house for what he believes is a regular film shoot, Noah makes the mistake of putting up his own family in the motel which serves as his workplace. Slowly it dawns on Hera and Seta both what precisely is going on when Noah visits his clients. And as Noah sits beside the bed where he has just fucked Matthew, we notice in the background his wife, sister-in-law, and son, with packed bags, getting into a taxi—obviously to take them all away from the far-too-real sexual activities in which Noah is involved.

When he discovers them missing, the adjustor speeds back to their previous home, only to discover Bubba pouring gas over the contents of the entire bottom floor of the house. We don’t know if Mimi is upstairs, whether the boys have left the premises, or even if perhaps Hera, Seta and Simon have returned to their rooms above. With match box in hand, Bubba, calmly warns the sudden intruder that it is time to make a decision: “Now you’ve come in just at the moment that the character in the film, the person who was supposed to live here, decides that he’s going to stop playing house. So....are you in...or are you out?”

Noah, already in tears, slowly backs out, obviously preferring real life with everything that it entails, the touch of human flesh and the friendly assurances of human discourse to all the other alternatives with which he’s been faced. 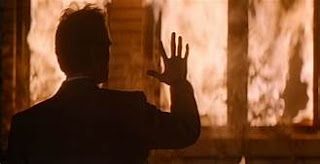 Now outside his own burning house and destroyed past, he is in the same position finally of all those others to who he has offered solace. His life too has been “adjusted.” He has chosen real human intercourse, as ephemeral as it might be, over any representation of it.

Appearing as it did early in the 1990s, Egoyan’s The Adjuster remained one of the most powerful statements about sexuality in general throughout that decade and is still among his very best cinematic works.

Posted by greenintegerblog at 1:03 PM