Bradley Rust Gray’s 1999 short film (18 ½ minutes) is purposefully “murky” on all levels. Two friends, pretending to be cowboys, are on their way cross country from nowhere to somewhere—we’re never told where they're headed—in a kind of languid hurry, at least if we are to believe the early morning wake-ups by Porp (Jason Herman). Evidently the other, far more handsome friend, Jason (Drew Wood) has a girlfriend waiting. 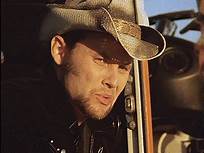 Presumably, Porp, with green fingernail polish, is gay, while Jason is straight; at least that’s what we can surmise by Jason’s accusation of Porp having fucked a guy they previously picked up, having as evidence found a condom in the back. Porp, on the other hand, asks Jason if he fucked a woman, evidently at a truck stop, “in the ass,” claiming that he fucked a girl named Jackie anally, while denying having sex with their hitchhiker. In another words, even if he’s gay, Porp is evidently not comfortable talking about it. He even buys a copy of Playboy for his friend so that he won’t have to think so much when jacking off.

There are two nighttime scenes at the center of this film in which we can barely see given the purposely poor lighting of the flick. But presumably in the first Porp is jacking off alone, rather enjoying it, while the second time around, Porp’s green painted fingernails seem to have found their way into Jason’s pants giving him a great deal of nighttime pleasure. 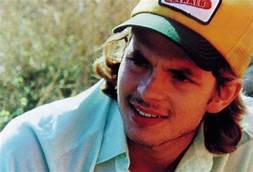 The next morning, while Porp smokes a cigarette a short ways from where they have parked their SUV, Jason walks in a rather wavering and hesitating path over to his friend, asking for a cigarette which, when offered, he slowly extracts from the box, catching a light off Porp’s cig. Porp moves back toward the car, signaling it’s time to again get moving. 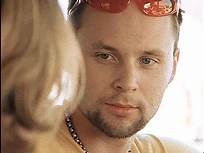 The presumption is that we might be interested in this encounter simply because it is unlikely, although, as I wrote long ago in my review of Brokeback Mountain we know that lonely men, no matter what their sexual inclinations generally enjoy the company of they’re with if there is none else around to do it with. In that movie at least we knew for certain that Enis Del Mar and Jack Twist definitely “liked it.” In Hitch we can’t even be sure of that! If Jason did in fact enjoy the fit of Prop’s hand around his cock, can we be sure that it was satisfying in any way to Porp? Not knowing anything about anyone in this film seems to be its object.

I suppose one might say that this is what being incurably Q is all about. But even those who are intent upon constantly questioning sexual boundaries do it with more energy and determination, I hope, than these two drifters.