what the porter saw

French director Ferdinand Zecca’s Par le trou de la serrure (What Is Seen Through a Keyhole) apparently premiered in 1901, released by the Pathé Company. However, it has also been titled What Happened to the Inquisitive Janitor and, in variations released in England, What Happend: The Inquisitive Janitor and Peeping Tom, the latter claiming to have been released in the US on June 1897.

Both English and US film companies often stole Pathé and other film company’s products, releasing them sometimes, it appears, on false dates to confuse their audiences and to escape lawsuits. The US Peeping Tom version lists no director, so I will presume the Pathé information is more reliable. 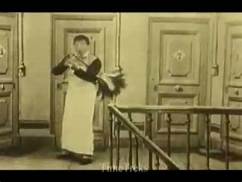 This is a simple visual tale of a hotel porter spying on four guests, the first a woman who slowly unpins her hair, letting it fall around her face.

Looking into the second keyhole he sees a woman unloosening her corset, after which she quickly pulls out large stuffed socks which served as her breasts. She lifts off her false eyelashes, before removing her wig to fully reveal that she is a male transvestite.

In the third room the porter witnesses a woman sitting on a gentleman’s lap as they pour our wine or champagne, drinking to one another and eating what appear to be appetizers. 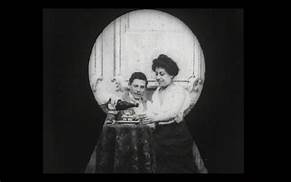 As he moves down to inspect the fourth keyhole a man suddenly appears, immediately realizing what was about to happen. He throws the porter down the stairs. The film suggests that it might have truly interesting if the porter had discovered the man in his room before he prepared to go out, for otherwise why might he be so severely offended?

Zecca, it is said, introduced documentaries, crime films, and works on religious subjects to Pathé. The film above was one of the first French films that was edited to combine wide and medium close-up shots.

Clearly What Is Seen Through the Keyhole represents an element of voyeurism that occurred in early French silent cinema. Georges Méliès' granddaughter described What Is Seen as being in dubious taste. It was apparently distributed in the US in 1902 by Kleine Optical Company, the Edison Manufacturing Company, and the Lubin Manufacturing Company; so obviously in had a large audience on this side of the ocean.

Posted by greenintegerblog at 12:40 PM