$30 begins in a dark car with neon lights reflecting upon it, as if we were about to engage with a contemporary noir. A father (Greg Itzin) and his son Scott (Erik MacArthur) sit in the front seat, the boy—seemingly having lost his ability even to speak—appears to be terrified, his dad waking him back into reality. “Scotty, you haven’t heard a word I said. ...Just a second ago you looked like NASA sent your brain to Mars.”

“Quit looking so nervous. It’s not that big a deal,” pronounces his father, asking him if he still has the $30, and telling him he’ll be back in an hour to pick him up. He starts up the car and drives off.

For a moment he have no clue about what mission his father has sent him on for that apparently terrifying sixty minute adventure. He climbs the stairs of some unrecognizable structure and stands for a moment outside a door, attempting to regain his composure, whispering to himself “Don’t be such a pussy Scott.” He knocks. 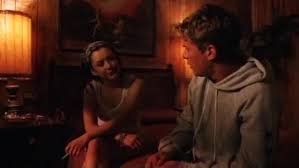 We already suspect the results. He cannot get an erection, and after a few moments of attempted sexual contact, the boy suddenly leaps up, running into the bathroom to wash his sickened face. She suggests they simply take a break and try again later, comforting him with the words that any experienced woman might: It happens to lots of men, especially the first time.

A few minutes later they are standing downstairs by the motel pool, Scott drinking a soda, and explaining the circumstances, that his father has made the appointment as a birthday gift. Even the prostitute is a bit startled: “The guy who arranged this is your Dad? God, it’s kind of...pushy.” “No shit,” the kid agrees.

Eventually returning to the room, Scott suddenly comes alive. “You must think I’m a total retard. See, the reason I couldn’t do it in there is I really, really like this girl, and it’s not you, it’s me.”

The aware viewer almost anticipates her next question: “What’s his name?”

The boy is taken aback. “Who?”

After a long and awkward pause, he blurts out, “Fred. His name’s Fred,” still amazed and a bit troubled by her perspicacity.

She pretends to have a special "vibes" about gay men, always being able to tell, and Scott is still just innocent enough to believe her. But in that moment alone the two hit it off and spend the rest of the hour they have left sharing conversation with one another.

By the time he hears his father’s car returning, they have become friends of sorts. And when the “pushy father” approaches the room, the hooker begins to moan, finally Scott joining in, giving proof to the fact that they are in the midst of sensational sex. Before he leaves, she gives him a small cupcake as a birthday treat.

When the father honks the horn, Scott leaving, Michele (which we discover is her real name) leans over the balcony, the father calling out, “Heh, how was my boy.”

As the final few scenes shows Scott and Fred dancing on the beach at sunset, the car pulls off with the two men in it. Together Michele and Scott have pulled off a “grand deception”—grand not just because they have fooled the elder, but because Scott has fooled himself that he can keep the fact of his sexuality hidden.

Yet, we know some day soon he will have to suffer the truth, no matter where that lands him. The writer of this work, Christopher Landon—the son of the TV Bonanza star Michael Langdon— who, when he finally revealed that he was gay, realized that given the continued homophobia in Hollywood and the film industry, he was putting his career in jeopardy. As with so many figures straight and gay who portrayed or wrote about gay characters, his then budding writing and directorial efforts temporarily suffered. As he notes,  "I was the flavor of the month, and then I was quickly dismissed. I reached a point in my career when I couldn't get a meeting anywhere." But he later came back to write and direct a series of successful commercial blockbusters, including Disturbia (2007) and the found-footage films, two through four of Paranormal Activity.

The movie on the TV when Scott enters the motel room was a clip from Little House on the Prairie, one of whose leads was Melissa Gilbert, the sister of Sara, director and actor Gregory Cooke’s choice to play the prostitute in this short film.