The Mysore Indian-born actor Sabu (born Selar Sabu in 1924, also known as Sabu Dastagir) was a beautiful child star whose career began at the age of 13 when he was discovered by director Robert Flaherty and cast as Rudyard Kipling’s Toomai in Elephant Boy. directed by Flaherty and Alexander Korda, the latter of whom would also direct Sabu in The Drum (1938) and the hit movie The Thief of Bagdad (1940) when the boy was 16 years of age. Roles in Korda’s Jungle Boy, another Kipling-inspired film, and John Rawlins’ Arabian Nights, both from 1942 followed, locking him into career as  a figure in works of high exoticism, which, after World War II would result in his performance mostly in grade B movies, both British and American, for the rest of his life. 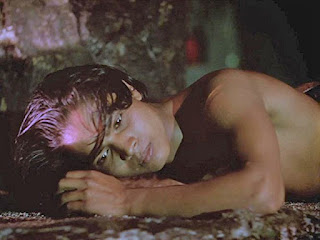 At the age of 20 Sabu became a United States citizen and served in the Army Air Force as a tail gunner and ball turret gunner on B-24 Liberators.

A year later Sabu married Marilyn Cooper whom he met on the set of Song of India. They had a son, Paul, who later established the band Only Child which created big hits for David Bowie, Alice Cooper, Madonna, Prince, and many others (“Cassie’s Song,” “Just for the Moment,” “New Girl in Town,” etc.)

Sabu’s career opportunities, once the beautiful boy had came of age, mostly evaporated. In 1950 a fire to the second story of his family home in Hollywood was tried as a case of arson, but may have actually been arranged by Sabu himself in order to receive insurance money which he needed to help his family financially survive. He died, at age 39, of a heart attack, only two days after a checkup with a doctor who reportedly had told him: "If all my patients were as healthy as you, I would be out of a job.”

Ian Iqbal Rashid’s remarkable short fictional documentary of 1997 begins with an Indian man relating the early cinema days of the legendary child actor Sabu in what his son will soon describe, interrupting the narration, as a “Prince of Wales” voice. We catch quick glimpses of Sabu performing in Elephant Boy and The Thief of Bagdad.

Suddenly the film shifts to black-and-white, where we see the British-sounding man’s son smoking a cigarette on the street and, seeing his father (Suresh Oberoi) walking toward their house, calls out to him, the father refusing to respond. Inside the walls and shelves are lined with photographs of the young Sabu, a copy of Life perhaps of the time of Sabu’s marriage, etc. The color “documentary” continues, while we witness more clips from Sabu’s films:

Sabu found fame and fortune in Hollywood. Still only as a

teenager, Sabu was living the life that most immigrants to

the West could only dream of. When my son was a boy I’d

make him watch Sabu’s films on television. I’d allow him to

stay up late. It was important he should know we can succeed

in the countries. That it’s possible. 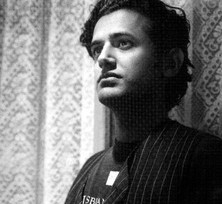 As his son Amin (Navin Chowdhry, playing the director), asks his father to now talk a little more about his coming to England and what life was like, we realize that this is not a documentary about Sabu but rather about the young director and his father, whose values we soon discover are quite in opposition to each other.

In the kitchen, soon after or at another time (again filmed in black-and-white) we see the father preparing a full Indian dinner, the son, having brought him a tape of Indian music with jazz infusions, the father responding, “Fusion or confusion.” Asked if he is staying for dinner, Amin responds he’s got an appointment with his psychiatrist. He’s stressed. Besides, the son soon reminds his elder that he doesn’t eat wheat, dairy, meat. “All the things you said were for us when I was a kid, they’re not.” We notice he’s wearing a T-shirt which sports the words “Gay and Lesbian Center,” something which obviously has stressed his Muslim father as well.

Again through a color-film sequence, we see the son recounting his father’s experiences of having come to England to be a policeman, but after being refused year after year worked as a security guard, proud of what he does, proud of being loyal.

At another meeting in the kitchen, where the father is fixing dinner, Amin announces that he needs to talk to his father about something, the elder responding, “You’ve decided to meet a nice Muslim girl and give us all a reason to live?” The son has shown the movie to some “important people” who are interested if only they can finish it. Yet his father finally responds that he doesn’t think he should be making a film about Sabu. “You are not worthy. ...You’re making fun of a great Hollywood star.”

The son’s response says nearly everything that represents their vastly different conceptions of the world which they cohabit: “Hollywood star! He was a colonialist fantasy. Those films dad, they look at Sabu with a colonizers gaze.”

“Why make a film” his father protests, “about someone you despise?”

When we return to the description of Sabu, his golden almost nude body spread out in the sand  we might almost imagine that the narrator was speaking to us from the pages of a gay physique magazine rather than the father’s front room:

Sabu had an unnatural natural beauty. Such a beautiful body.

A muscular athletic physique. [In the clip, Subu turns over

to reveal the front of his body] I told my son, look at Sabu’s

body, that he should exercise and himself look like Sabu. But

he was always reading his books and playing with his dolls

Clearly if, as the son argues, Sabu was seen through the colonizer’s gaze, so also has his father and others seen him through a queer gaze.

Again back in the kitchen (in black and white) the son continues: “You know the way you talk about him...it’s almost like.... Those movies filmed him like he was a woman. And you bought into it!”

The resultant anger ends in the father hurling back his own insults at his son’s admiration of white boys.

At another moment during the filming, in which the father has momentarily escaped to the backyard, they talk about Sabu’s death. “Poor Sabu. Died so young,” the father looking over at his son smoking a cigarette, “probably smoked. Anyway he wasn’t a Muslim.”

Amin responds: “I don’t think it was smoking. I think he was probably crushed by a film industry that rejected him when he became an adult. He couldn’t get any decent work. Gave up hope.  ....It was about racism dad, a Paki leading man kissing a white woman on the screen. It was never going to happen.”

The father finally at his wit’s end, storms out. “When I get back I want all of you out of my house.”

In Rashid’s film, we have come to perceive, Sabu is but a symbol of all that one generation perceives as a continuation of the racism and denigration of outsiders about a culture that the previous generation could not admit if they were to survive and succeed to the best of their abilities. In this short film we see not just the generations clashing against their different perceptions about moral values, work ethics, and sexuality, but facing off in a directional shift in the entire course of history: for Amin’s father every patient step on his part was a movement forward, a small act of progress that could lead ultimately to assimilation, while for Amin everything is turned around, having never resulted in significant change the hope to which his parents’ generation had been committed has shifted into a despair for what Amin and his friends see as movements into the past of discrimination and outright hate for anything that stands outside of ruling society’s normative cultural patterns. The two of them view the world from entirely different perspectives.

Yet, in this director’s amazing short work, father and son each are able to turn around and see one another from the other’s viewpoint, which brings them back to life, away from their frozen stares into the future and past, into the present:

Amin’s father speaks: “When he was growing up, I tried not to talk to him much about the past, about back home. I thought I should focus on the future, tell him what he didn’t know about this place. Instead he told me.”

In antiphon Amin speaks: “He left Uganda* with no money. He started from scratch. He rebuilt his life. He had courage. How did he do it? It couldn’t just have been so his son might have a better life. It just couldn’t.”

The father realizes now that when Peter Sellars and other actors rubbed a chocolate-covered makeup across their face, everyone laughed. “They were laughing at me.”

Amin speaks of the time when he first told his father that he was gay, recalling the look upon his face, realizing, “He’d have swapped me for anyone. Anyone else’s son.”

And the night he told us he was gay, his father recalls, he stayed over that night, wanting everything to be all right: “That took courage.” 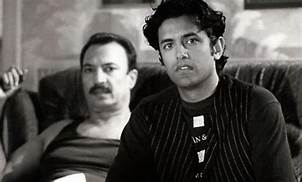 Returning to the house, Amin finds his father watching a Sabu film and joins him on the couch, the two quoting in unison a line about Mogli from Sabu’s Jungle Boy. The elder agrees to finish the last few frames of his son’s film with him, remarking that he will be all right with whatever his director son presents in this movie. His philosophy he says is “Relax, it’s only a film. What harm can a film do?” If his question appears to offer a true reconciliation, it also belies the truth that language, story, and image are the most terrifyingly powerful things in life.

*Director Ian Iqbal Rashid was born in Tazania, from where his family, after being refused asylum in the United Kingdom and the US, settled in Canada, Rashid finally moving to London as an adult. Rashid has made other films, including the gay comedy Touch of Pink, but is best known in England for his poetry.

Reprinted from My Queer Cinema and World Cinema Review (January 2021).

Posted by greenintegerblog at 1:08 PM