Jason Gould | Inside Out

Jason Gould (writer and director) Inside Out / 1997

Aaron Gould (Jason Gould) is cute, charming, and clever—almost everything you might want in a gay man in his 20s. Yet is has a few serious problems. He finds it difficult to meet new men, and more importantly to stay in longer relationships with them. Even the “smart, successful” date “with gorgeous hair and nice teeth” (Steven Flynn) who his best friend Adam (Alexis Arquette) hooks  him up with decides upon their second meeting that the two are just not right for one another, despite Aaron being, as he puts it, “smart and funny,” “a real nice guy.”

Furthermore he has a problem with his stepbrother, Simon (Sam Gould) who keeps getting arrested for streaking, as in running nude in public. In California “streaking” is a sex crime, Aaron explains to his date, “Three streaks and you’re out.” Also it appears that wherever Aaron goes people are seeking to help him find a better life—which given the comfortable bungalow in which lives, the lovely meal we see him cook, and the beautiful vase of flowers in brings to that dinner table appears to be quite fine without their help. His therapist (the joke that everyone in California has a therapist is a truism in this case) wants him to go on antidepressants, but his father doesn’t approve of drugs although he was certainly known for taking them when he was young. His father would like him to meet a powerful manager Phylis (Anne De Salvo)—perhaps to kickstart Aaron’s flagging acting career—but which Aaron suspects will lead to a pressured invitation to join Scientology, which is precisely what happens, Adam troubled by his friend’s passive patience with their attempts to convince him that he needs their help, for a very steep price. And then there’s a high school friend, Susan (Katie Asner) who wants Adam to come to “Group” with her run by Christina Crawford—yes, that Christina Crawford, author of Mommie Dearest. One session, in which he’s asked “are you biological,” is enough to convince him that the “group” not for him. 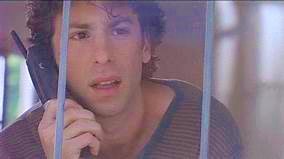 Moreover, there’s that tabloid headline: “Superstar’s Son Marries Male Model” which understandably irks him since, although he is openly gay, he has not married anyone, let alone a male model. Along with the photographer waiting outside in his car to shoot an entire role of film whenever Aaron might decide to leave his house, it’s been a difficult few days to say the least.

If you haven’t guessed by this time, Aaron’s biggest problem is that, like the actor portraying this character, is the son of Elliott Gould (who plays his father in this short film as well) and Barbara Streisand. Aaron, this semi-autobiographical work’s nom de plume for Jason, previously appeared as her son in Streisand’s movie The Prince of Tides, so it seems fair play that Elliott should appear in his son’s picture. 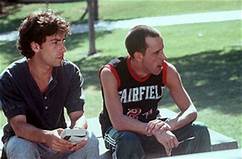 Alexis Arquette—the transsexual actor whose grandfather was comedian Charley Weaver and whose sisters and brother are actors Rosanna, Patricia, and David—was Jason’s real-life friend, whom he commandeered to play the male role of Adam in this film; Arquette died of AIDS in 2016. And Katie Asner, obviously, is the daughter of actor Ed Asner, and has herself appeared in several popular TV comedy shows. Christina Crawford also makes an appearance in Gould’s work, conducting her real-life “Children of Celebrities” group. Jordan Ladd, granddaughter of actor Alan Ladd and daughter of Cheryl Ladd plays a minor role in Gould’s piece.

And finally, this film’s director, who is gay, really was falsely reported in the tabloids as having married a male model. "It was shocking because it's so untrue," Gould says. "It was just so grotesque to me that they could make up a story like that and claim they had seen pictures of my wedding to a man. And then print this story even though I deny it." It’s quite clear that Gould did not have to rove too far “out” of his California life experiences to find meaty satiric material.

Although he never was actually stalked by a photographer, he obviously experienced the endless snap of the camera whenever he appeared in public with his mother. In this case the beefy photographer (Sam Polito), who later spies his victim skating on the Venice Boardwalk and, jumping into his car goes on a chase for his photographic prey.

Hiding out in a portable potty in a nearby parking lot, Aaron—totally worn out by just trying to live a normal life—finally comes out from hiding, shifting into a hilarious strip-tease in which one-by-one he pulls off his knee guards and his shirt, throwing them at his spell-bound stalker, as he skates around him in a stripper’s bump and grind, before he pulls off his undershirt, turns around, and moons the man.

It felt so cathartic, he admits, quipping, now I know what my step-brother sees in streaking. So absurd has his life become that he walks off with the would-be photographer as if he were a new-found friend, ridiculously confiding that he did in fact marry his long-time secret lover—in a dress.

When this work was finished, Gould moved to New York, where he admittedly is no longer hounded by people for being a product, so to speak, of the “industry,” and is able to better meet and make real friends. Yet Inside Out, is such an affable comedy that one wishes he would act and direct further works in the future. But as he admits early in this work, he doesn’t like to see himself on the screen, presumably neither inside or out.

Posted by greenintegerblog at 12:16 PM