how do you know if you’re gay

Yesterday, January 6th—one of the most frightening days in American democracy when Trump supporters dared to attempt to take over the US Capitol Building to reassert their fantasy that this sick being had actually won an election he had massively lost—I still took time out to watch another queer movie, realizing that at this fraught time it was more necessary than ever before to record the history of the LGBTQ community as expressed through cinematic representations. Although the rights of lesbians, gay men, bisexuals, transsexuals, and those questioning of unsure of their identities were not specifically being attacked on this day, we all know that if the people who support Trump and other such rightists might have their way, all of our hard-won rights would be stripped, and we would return to the days in which we had to hide and cower rather than speak out freely about our existence.

It was appropriate, I’d argue—although like much of what I do, it was simply a matter of coincidence—that I chose to view the 1987 45-minute film, What If I’m Gay? directed by Jeffrey D. Brown. As I began to watch this work, in between tracking the horrors of what I was witnessing on television, I felt that I’d seen this story—about a young high school student suddenly coming  to the realization that he might be gay and having to face his suddenly hostile former friends daily in the hallways of his school—many times before. Indeed, in its slightly histrionic, almost melodramatic telling, the tale of the young soccer team captain, Todd Bowers (Richard Joseph Paul)—who is suddenly suspected of being gay by his teammates and long-time friends Kirk (Manfred Melcher) and Allen (Evan Handler) when they discover a nude muscleman magazine in his desk drawer—seemed almost derivative until, looking back on my essays, I perceived that in the 1980s when this film first appeared as a “CBS Schoolbreak Special” there were very few examples of what we can now recognize as a “coming out” movie featuring 17 year-olds. The significant models of those films such as Get Real and Edge of Seventeen were still a decade away. 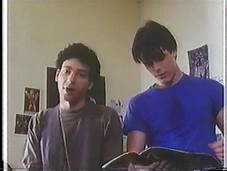 Throughout the 1970s and 1980s, LGBTQ films dealt mostly with adults who had long ago accepted their sexualities, and even in the few “coming out” movies such as the 1982 film Making Love the central figure was a adult coming to terms with being gay after several years of marriage. In the one exception among the films I have already written about (albeit I have yet about 160 films from just 1980 yet to screen) which involve a young boy, The Flavor of Corn (1986) it was the younger who taught his older teacher about the potentiality of gay love rather than the other way around.

In short, this film presents us with one of the few examples of the decade that would later become a genre of its own. Moreover, even the later young high school coming out movies usually involve the love of another teenager or slightly older youth. In Todd’s instance, not only is their not a potential or actual lover to lead him through his sexual searches, but he knows no one, as he laments later in his confession to a school counselor, who is gay, and has had no gay sexual experiences—which reminds me of my own situation at that time of my life. 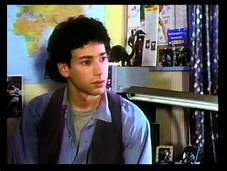 Even his  unconventional friend, Allen (Evan Handler) has a uncle who went through a similar experience. In fact, given the title of this work we might suspect Allen as being gay before we—and his friends—discover that Todd may have gay desires. After all, Allen is the one who, contrary  to the “normal” student behaviors, likes anchovies on his pizza, prefers jazz to rock ‘n roll,  participates in no sports, and seems to be constantly skirting any date with the girl who likes him, Nancy (Gabrielle Carteris). Not only does he have the gay uncle, but he is the only male who remains friends with Todd despite the possibility that he will be now also defined as gay, attempting to help guide his friend with all too savvy advice, occasioned by the necessity of the script meant to help guide young viewers out of just such a cul de sac in which Todd seems to be trapped. Worried about their friend’s state of health, it is Allen and Nancy who are willing to break into his house to make sure that the depressed Todd has not attempted to commit suicide. It is Allen who offers the most profound advice of this not terribly profound movie, “You will never be happy until you come to terms with who you are.” 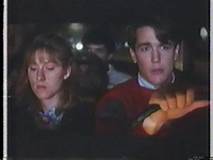 But that, of course, is the nearly impossible question, particularly when you have had no previous encounters with queer life. The most poignant question this work evokes is “How do you know if you are gay?” A question for which there is no answer. Todd, with rather remarkable equanimity given his previous rather violent attempts to prove to himself and others that his is a “normal” male—attempting to beat up his childhood friend, Kirk, with whom he grew up considering him almost as brother and almost raping his girlfriend Debra (Viginia Rae Robinson).

Todd begins to perceive that his obsession with a national football hero whose every move he followed, clipping out and saving newspaper articles about him was not just a young sports-loving boy’s interest in a hero’s achievements, but represented a kind of “crush” he had on the player, a feeling he still holds inside. His interest in muscle-building magazines like the one in which some of the figures are shown in the nude, the magazine his friends discover in his desk drawer, was akin, we perceive, to the numerous male beefcake magazines of the 1950s and early 1960s—publications which assert an interest in the health of the male body, but actually serve another purpose of satisfying the masturbatory desires of necessarily closeted homosexuals.

He even comes to terms with his differences, realizing that his dating was an attempt to prove himself as a heterosexual. And the advice of his rather incompetent, I’d argue, school advisor who suggests Todd see a psychiatrist and have a conversation with his former best friend who he argues is perhaps now fearful that given their friendship he might also be harboring gay feelings, seems almost doomed to failure given the toxic masculinity of Kirk and the others like him. In this short film it appears that the solution to Todd’s difficulties is to reassure his friend of his heterosexuality as much as to demand acceptance for his own differences. 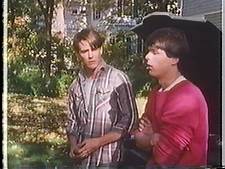 Unfortunately, in this well-meaning lesson to students on how to deal with their LGBTQ feelings (and obviously this work is focused almost entirely on gays, whose problems and solutions are not entirely the same as all the others of the community) represent rather simplistic answers which result in unbelievably favorable results. If nothing else, looking back on this work from five decades later, the work belies the dishonesty of the truism that “it gets better.” Certainly, if the 2019 French film PD (Fag) is to be believed, the same almost total and sudden ostracization of young men perceived by their classmates to be gay still today faces youth whose queerness is perceived or even falsely questioned in their teenage years. Easy answers which this film makes such as sit down and discuss it with your parents, are not always helpful; my loving father proclaimed he would send me (or any son, presumably meaning my totally straight, sports-loving brother) packing if he ever discovered us to be gay*; and even the gay country singer, Will Lexington, a regular character on the TV series Nashville (which ran from 2011-2018) was left on the side of the road when his father discovered his homosexuality. When Todd earlier dares to even take up the subject with his father, the elder admits that as a young man he too bullied a young gay boy he knew in school. When he asks Todd if it’s “anyone I know,” his son answers what all those who are secretly gay come to realize: “Naw, you don’t know him.” That’s the problem for all young LGBTQ people, they feel so isolated in the conventional worlds in which they often live, that they cannot even imagine anyone might know what they’re feeling.

Todd remarks that he sat outside the gay and lesbian center for a long while before he decided to speak with this school counselor, another well-meaning figure who declares he’s glad the boy decided instead to seek him out. I’d suggest he might have fared better if Todd had entered the center, sat down, and had a long chat with perhaps the first gay person he had ever met.

But you can’t help but like director Jeffrey D. Brown and writer Paul Cooper’s little movie for daring to take on this subject in a popular medium in 1987, the year which in October over 800,000 (some estimate closer to a million) men and women marched in Washington, D.C. for lesbian, gay, and bisexual rights, while earlier that same month the Minnesota Supreme Court, by refusing to hear a case, upheld that state’s anti-sodomy laws, which made any gay sexual act punishable by imprisonment.

*When I finally told my parents I was gay at the dinner table in Howard’s and my Washington, D.C. apartment, my father stood up and signaled my mother, who together got into their car and drove straight back to their home in Iowa. I was then 23; had it happened six years earlier, I do not think I could have handled it as well as I did in 1970, with the man who I have now lived with for 51 years.