putting out the fire

Lane Janger and Jennifer Vandever (screenplay, based on a story by Lane Janger), Lane Janger (director) Just One Time / 1999

There’s something you immediately want to like about Lane Janger’s supposed romance, Just One Time, particularly if you’ve previously viewed the short I review above. Admittedly, as I’ve recalled in a footnote to the above review, Janger worked for me for a semester, and I liked him very much—although at the time I didn’t know he was gay or would soon be involved with actor David Burtka, a relationship that lasted from 1994 to 2004. Ten years is quite a long time for movie and theater couples.

Beyond my personal feelings, however, Janger, with his handsome physique and rather appealing smile is simply someone you want to like and trust. Even Victor (Guillermo Díaz), suggests to Anthony’s (Janger) fiancée Amy (Joelle Carter) that she stick out her relationship with him simply because he’s “hot.” And, apparently, they love one another. 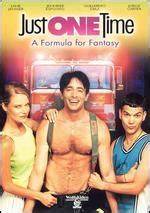 Yet that’s the problem with this film. It’s truly difficult to perceive what the hard-working law clerk Amy really sees in the zealously religious, culturally unaware Italian-American fireman—or, for that matter, what he sees in her. Amy is certainly attractive in a kind a waspy, high-spirited way; luckily she has been raised—or, at least, left alone to her own devices—by her hippie-like, open-minded parents. Evidently both Amy and Anthony are highly romantic in the way that Sam Baldwin and Annie Reed (Tom Hanks and Meg Ryan) were in Sleepless in Seattle (1993). Only this couple has met on a bench by the local basketball playground instead on the top of the Empire State, which pretty much represents the height of their marital aspirations.

But the fact that Amy has agreed to study Catholic Church Doctrine just to marry this handsome lug of a man whose greatest feat of imagination, it appears, is to realize the banal straight-male fantasy of seeing his wife have sex with another woman “just one time”—and soon since after their upcoming wedding, so this foolish pious charlatan believes, it will automatically become a dreadful sin. One wonders whether the supposedly well-read Amy has even heard of feminism. Surely any feminist would not long have shared a bed with such a jerk.

Amy instead tries to force him into perceiving just how demeaning his demand is, by insisting he stand for a moment in her shoes, and live out her “pretended” fantasy, for him to have sex with another man. Any reasonable heterosexual male bigot might have put on the breaks right then, folding his silly fantasy back into the whack-off books for when his wife is out of town. 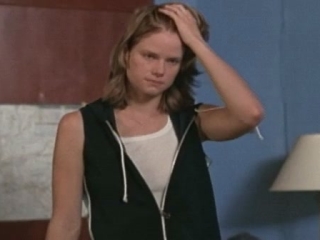 A truly perceptive and curious man might have even gone through with her threat, knowing that a jack-off with a good-looking guy or, if necessary, even with closed eyes, might be worth checking out. But not this village idiot, who with his fireman friend Dom’s help, is convinced that if he “pretends” to go through with the deal it might satisfy her enough to permit him is last gasp of a teenage jack-off dream.

Fortunately, the “man” she has chosen for him, the local gay boy, Victor is even more innocent that he is. For Victor the very idea that his long-squelched gay sexual desires might be consummated by a hunk he’s had the hots for since high school is more than a daydream; it’s as if some fairy god has come down a granted him his most fervent prayer. Innocently eager and ready, he attends to Anthony as if he is reporting to a general about to award him a merit badge for having been very sexually patient. His nearly out-of-control excitement in being asked to play this role, however, also immediately breaks the heart, as we realize all his hopes are certain to be dashed by this empty-headed representative of male insecurity. 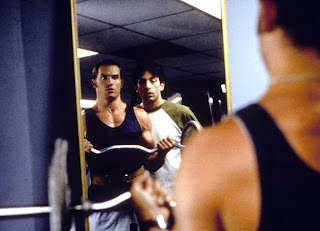 In an attempt to stall any actual sexual breach of his male normalcy, Anthony agrees, again upon his friend Dom’s (David Lee Russek) advice to go on a date with his newly-assigned sex mate to a gay bar. So terrified is Anthony of his trip to his local queer “funhouse” that he insists that his best friends accompany him.

What we realize in this outing—you’d think they were traveling down the Congo river instead stopping off into a local hangout—is that the seemingly affable Anthony is a true homophobe at heart, while his supposedly queer-baiting buddies have a great time dancing it up, ready return for a free visit on “wear a wig” night. When Victor, saying goodnight, says that the event was the most fun he’s ever had, we want to cry instead of snicker.

And there’s something else going on here that just doesn’t sit right. Admittedly, hundreds of heterosexuals have performed as gays, lesbians, bisexuals, and transgender beings throughout the history LGBTQ-themed movies and plays, so it should really come as no surprise that the homophobe in this case is played by a gay man. But the fact that the directors have repeatedly chosen straight males to perform as gays when they might have chosen any number of excellent gay actors instead, has always exasperated me, particularly when the gay figures, as in the TV series Number 96 I just reviewed yesterday, served as models to young people who were suffering sexual confusion. In that Australian series not one of the actors who played the gay characters was truly homosexual. Wouldn’t it have been nice to know that such a model might actually have a same sexual existence behind him? 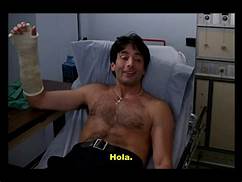 It seems even a bit more bizarre, accordingly, to imagine a gay man actually taking on the role of a homophobe, or at least a man who can’t even abide the notion of actually participating in gay sex? If nothing else, it perhaps explains the discomfort with which Janger plays this role, his frowning fearfulness literally sucking out any of the fun that the comedy might offer.

In her search into lesbian sexuality, Amy is a bit more successful, actually forming a kind of attachment to the woman, Michelle (Jennifer Esposito), with whom, if it becomes necessary, she has reluctantly chosen to have sex. Unlike Anthony, who leaves poor Victor to speak to his friend Dom, Amy actually gets to know her potential sexual partner, and even to like her, finally entering into the new friendship enough that one might describe her as actually exploring her own sexuality, and certainly wondering in the process whether she has chosen well in a life-time companion who is seemingly determined to carry out his infantile delusion.

If nothing else she begins to realize that stupid fantasies have real life consequences, whereas Anthony, now made jealous by Amy’s new relationship with Michele, feels even more threatened and insistent that she prove her love for him through her performance of his request. That Amy finally wakes up to the fact that Michelle and even the total inexperienced Victor have more mature sexual lives than the one she has with Anthony ultimately forces her to leave him at the very moment he becomes convinced that she really has fallen into the arms of a lesbian lover.

At this point it simply becomes too difficult to care much about what the writer-director-actor might have to say to us. Suddenly Anthony’s hairy pecs and sharp jaw line no longer are enough. 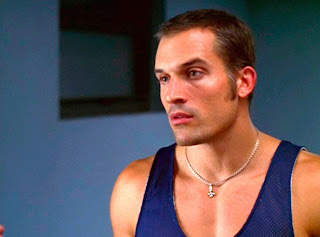 Victor gets the handsome Dom as his real bedmate, and Amy inevitably forgives Anthony hoping to shut out any future fantasies with the reality of her love. But the fact that they make their reconciliation in the same small park where they first met, suggests that they haven’t gotten very far.  And we have to wonder, given the new worlds she has explored will a man who seemingly has still not assimilated reality be enough for so far many times than just “once?”

Posted by greenintegerblog at 4:36 PM