Mark Gasper’s hour-long film An Empty Bed begins with the evocative strains of composer Glen Roven’s score and a long tracking shot moving from a disheveled bed in which an old man, Bill  Frayne (John Wylie) his awakening while in the background we hear news and weather in a radio along with the endless ticking of a clock. The camera sweeps quickly through another room where we see many antique photographs, obviously of another generation of the time when the man was still a child, before moving back into the bedroom as Bill slowly sits up, has a coughing fit, stands, moves to the living room, and takes out a cigarette—obviously the cause of his coughing. 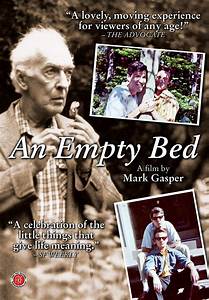 Suddenly, as if from a echo chamber we hear a voice—who we later in the film come to realize is Pete’s wife, Corinne (Harriet Bass) saying “I think it’s great that the two of you were roommates”—followed by heavy laughter in the same in which a much younger version of himself (Mark Clifford Smith) is sitting with his even younger lover Peter (Conan McCarthy) who presents him with a housewarming gift, since they apparently have just moved in, of a lovely green-glass ashtray, Peter saying “This is our apartment now. We’re going to keep it neat.”

As the camera pans quickly across the room we recognize that it is now not kept so very neat the elderly Bill picks up the same ashtray and takes it into the kitchen where it empties it into the trash. He lifts a bottle of whisky and carefully marks the line of what is left it the bottle. We can guess that his doctor has ordered that he delimit his alcoholic intake, and we later discover that he has a couple of years earlier had a heart attack.

So we perceive what will be the structure of this bittersweet tale that joggles us between the empty present and a more joyful past, forcing us to adjust to the obvious changes that have occurred in this old man’s life.

I describe Bill as an old man with some consternation since, having been forced to retire early only a couple of years earlier, as we are later told, the character is probably a few years younger than I am today, watching this film at the age of a few months shy of 74. And I was struck by this film, for that very reason, in a way I might not have been just a few years earlier. This is the story of a man who is nearing the end of his life in total contemplation of how he has ended the lonely cocoon in which he exists. How did that joyfully shared moment of intimate laughter and the passionate sexual pleasures of Bill and Peter result in the carcass of a lonely man crawling each morning out of bed to walk around New York’s Greenwich Village in search of answers to that very question.

In our COVID-quarantined days of early 2021 I cannot even easily walk the streets, and certainly in the vast stretches of Los Angeles would find little to remind me of friends and events in my own and husband’s life. My contemplations of the past are almost all limited now to what I am just doing, watching films and writing about them. But fortunately, unlike the figure in Gasper’s An Empty Bed, my lover sits just a few feet away from me on our somewhat neatly kept couch and shares our bed.

Back in the late 1940s and 1950s in which Bill and Peter’s early days seem to be located, gay life was far more difficult not only because of societal strictures and general homophobia, but because of how young men and women had been conditioned to define and express themselves. Young college boys like the Bill we encounter in one of the old man’s memories were not only “expected” to marry and procreate by the parents and societies with whom and in which they lived but because of their own definitions of themselves. Bill comes home each summer from Boston University to spend pleasant picnicking days with his girlfriend Patty (Lenore Andriel), who cannot understand why he keeps returning to Boston when he might remain home, marry her, and attend the local State college. Bill assures her of his love but expresses his enjoyment also of Boston, and we can only suspect that despite the conservative traditions of that city, he is exploring there something he might not be able to at home. What we do eventually perceive is that the next summer, after graduation, he does return to Patty.

But even when he meets Peter in New York, they date not in a gay bar but in a sort of Beat Club, which has a back open terrace in which to perform poetry and smoke dope, and several side rooms where both heterosexual and homosexual couples can explore their love. They shared their meals in local diners such as the Gus’ local Greek diner, where Bill still eats, ordering up favorites with far less fat and salt that he and Peter shared in their hearty celebrations of consumption.

We get only a few glimpses of their life together, but we surmise that their friendship was not as easy one, attempting a monogamous relationship at a time when gay couples had few other shared models. Their age difference, Peter obviously the younger man who is unemployed and Bill working for a talent agency, creates tensions. On Bank Street, standing outside the Waverly Inn, he recalls a dinner in which Peter expressed his feeling of having no connection to his lover’s life. “You lie to your mother. No one at the agency even knows that I exist.” Feeling trapped in domesticity, he wonders, with Bill paying all his costs, whether is simply someone to keep his companion warm at night, characterizing himself as being something close to a gigolo.

In the elder Bill’s flashes of memory we gather, near the end, Peter had gotten deeply involved in drugs, now needing his partner’s money in order to feed his habit, money that Bill often no longer had or wanted to give him.

Yet their love, despite its rocky times, seemed to abide which the old man’s stare through a restaurant window at a handsome young man, who clearly reminds him of young lover, reveals. Evidently, however, Peter finally demanded his freedom. And unlike today in which it might mean him taking up with another gay acquaintance or pickup, ends in a heterosexual marriage, a move to Florida, and children, with whom Bill forlornly is kept abreast, the couple visiting him on a trip to New York which occasioned the comment by Peter’s wife that we heard in the first few frame of the film. Obviously, Peter has felt no need to tell her of the real nature of their “roommate” days.

As the older Bill shuffles slowly through the Village streets we realize gradually that he has no longer any existence except in that temporarily glorious past, even if he realizes that it might have been worse. Running into an old friend Elmer (Thomas Hill) he discovers that since leaving the agency to represent his own clients Elmer has now suffered bankruptcy—as Bill perceives when his former friend checks his balance he has only $13.00 left in his account—and must continue to work in the hopes of finding enough money just to survive. He has apparently been divorced by his wife.

Later, coincidentally, he runs into an elder version of his early girlfriend Patty (Dorothy Stinnette) who long ago married, has grown children, and is now teaching again. She declares that her life has been a happy one, that her husband is a fine father and that “she couldn’t ask for a better man.” Yet we also see in her face that she might have imagined herself happier if she had married her first love, Bill. “Sometimes I wonder, what did I do, huh, what didn’t I do? You came back that summer and you changed so. It was like you were a completely different person.”

“I got tired of waiting.”

She asks the important question of this film, “Are you satisfied with the way your life has gone?”

“For the most part.” He continues with the most profound statement of the movie, “Believe me, there was no other way.”

She gives him a gentle kiss on the cheek and is off to finish her shopping.

Suddenly, in Bill’s statement of acceptance and reconciliation with his gay identity we no longer feel sorry for him. He returns home, hardly able to walk the stairway three floors up to his apartment. And that night we know he will drink another measured portion of the scotch he has left. The next morning he will rise up slowly, have a smoke, and walk the streets where everything reminds him of the choices he has made. But he is no one to be pitied. He has lived a full life defined by who is knew he was and is.