Nickolas Perry | Must Be the Music

Nickolas Perry (screenwriter and director) Must Be the Music / 1996

Nickolas Perry’s 1996 work Must Be the Music begins in a car in the Los Angeles San Fernando Valley with four teenage boys—Eric (Michael Saucedo), Kevin (Justin Urich), Dave (Travis Sher), and, driving and narrating the events, Milo (Milo Ventimiglia, in is his very first role) heading to downtown LA to a gay dance club, Orbit. It is a typical Friday night at 11:00 when young high school or recent teenage graduates head out to find love, suggesting that this not very profound little movie might even be described as representing the “searching for love” or “first date” gay genre. Except nothing quite turns out to be entirely typical in this 15 minute short. 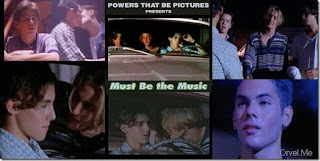 First of all, one of the boys, Dave, Milo’s cousin who lives in the Valley in Northridge, is straight. His only claim to fame, so the voice-over tells us, is that he was beating off during the 1994 Northridge earthquake and he claims that he was the best orgasm he’s ever had. Alas, this is also the funniest line of this Sundance Festival premier.

Eric is a little “immature,” but cute so Milo tells us. The final member of this quartet, Kevin, is quite apparently obnoxious in his behavior, so the voice-over tells us, to irritate his parents. After all, like the narrator he went to Fairfax High, which seems to explain everything.

Orbit is a large sprawling complex of open rooms with ear-splitting music and, as in most such youth oases, hundreds of skinny, sweating bodies, mostly male but also female, heaving themselves against each other in the hopes to draw enough attention from someone with whom they might share the night.

Each go their separate ways almost immediately after entering, Dave to find a corner—not very successfully—where he might wait out the time for the others to return him home. Why he has joined them is never quite explained.

Milo heads directly to the main floor of dancers, while the two other split away to disappear from sight. But soon after we observe Kevin slapping the hands of friends. And in another corner of the warehouse, Eric finds his previous boyfriend Matt (Grant Swanson), whose new lover Gregg (Eddie Mui) challenges Eric about whether or not he’s “still confused,” Matt having evidently spoken to Gregg about the fact that when Eric is with boys he’s gay, but when he’s with girls he describes himself as straight. The movie doesn’t explore this “sexual confusion” any further; if it had it might have provided this work with a little more depth.

Meanwhile, when the crowd opens up the view a bit Milo spots a tall, very thin, blond-haired boy dancing by himself (Jason Adelman, who first performed in a McDonald’s ad at age 10) in a manner that might appear as if the stranger is completely drugged out, spinning in his own groove in almost slow motion; but for our young hero it is clearly lust at first sight.

Having retreated to the bathroom to wash off his face, Milo once again encounters the young adonis, and for a moment we might even imagine that the film was about to explore the common gay phenomenon of bathroom sex, particularly when a few seconds later both boys find themselves at the urinal separated by a few dividers but coyly eyeing one another nonetheless. Another boy intervenes between their glances, and Milo exits, Kevin meeting him almost the moment he returns to the deafening noise to ask for a favor.

He’s met a new guy who’s “totally cute,” and he’s got to leave now, he declares, because the boy’s parents demand that he return by a certain hour. Obviously, he’s asking Milo to leave the bar in order to drive the boy home where hopefully they can have sex or at least make a date. The only thing is he can’t recall the kid’s name.

Milo at first refuses, but Kevin insists he’s got to help “hook him up,” “he’s gorgeous.” Putting Eric in charge of keeping an eye of Milo’s cousin, he finally agrees, evidently intending to take Kevin’s date home and return to the dance.

“I think his name begins with an “M” or an “S,” says an exuberant Kevin, who obviously has been so delighted to have met the “cute” guy that, as he puts it, he can’t remember anything. Besides, it’s impossible inside to hear anything.

As their conversation emphatically ends they suddenly meet up with Kevin’s date, who introduces himself as Michael—the same boy over whom Milo has been drooling earlier on.

The viewer can only wonder how someone as unattractive and socially unfit as Kevin might have attracted the blond beauty, and it is clear that the now angry Milo wonders the same thing. Driving the boy home, Milo must now play the role of a chauffeur for the couple in the backseat, chattering away about whether or not they have boyfriends and other necessary pre-dating data.

The voice-over returns, Milo saying how much he hates Kevin and calling him an “asshole.”

“Here I am trapped in a moving vehicle with the cutest guy I’ve ever seen. It’s not fair. I’m dangerously close to getting into an accident just so that I can throw myself on Michael a split-second before he dies.”

Indeed, he almost does crash the car, but fortunately they arrive safely to Michael’s house, Kevin accompanying him the door like every young movie suitor hoping for one first kiss before the end of the night.

Michael, however, reports that he’s forgotten his sweater in the car and runs back to tell Milo that he’s sorry for the situation, having not known that Milo and Kevin were friends. We can only suspect that he’s shown interest in Kevin simply so that he might hitch a ride home so to please his mother who “freaks out” when he gets home after 1:00 a.m.  He gives Milo his telephone number, hinting that he would love to hook up with him.

Kevin says goodbye and returns to the car kiss-less, the “friends” driving back to the bar, with Milo at least knowing that he’s got a date. So, in the end we discover that this movie was after all just a “dating” flick. I have to say, I much prefer Jan Oxenberg’s quite hilarious version of lesbian first date encounters in her 1975 film A Comedy in Six Unnatural Acts.

And I have to presume that director Perry’s title is ironic, for surely it is not the music that pulls these boys into and sends them out of orbit every weekend.

Posted by greenintegerblog at 1:32 PM