Earl Baldwin, Monty Banks, and Arthur Caesar (screenplay, based on the 1903 play by Richard Carle and the 1935 play by George S. Kaufman), Ray Enright (director) The Tenderfoot / 1932

What’s true for almost all of the coded-queer films from Hollywood’s golden era of filmmaking from 1930-1960 is that it takes a clued-in eye sometimes to separate the heterosexual surface from the purposely hidden subtext—and admittedly one wonders at times whether it’s worth all the bother, particularly in the case of a rather mediocre work such as the Joe E. Brown vehicle The Tenderfoot of 1932, directed by Ray Enright, whose 73-some films represent some of the most inane productions of the studio system. 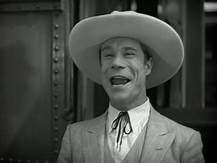 I suspect if it weren’t for a few George S. Kaufman lines and plot intrigues from his The Butter and Egg Man that made their way into this work and the four others based on his and Richard Carle’s earlier versions of the story, we wouldn’t even remember The Tenderfoot. But then Brown’s theatrically athletic face (Brown might be said to be totally athletic: he began his life as a viable baseball player recruited for the New York Yankees and, earlier, as a circus tumbler) is sometimes worth watching, and to catch a glimpse of the young Ginger Rogers playing a major role is perhaps of significant interest.

The plot of Enright’s film is of concern only because it might be described as a kind of a prelude to Mel Brooks’ 1967 film and Susan Stroman’s 2005 musical version of The Producers, only in this case the Nazi musical is simply a badly conceived melodrama in which Tenderfoot producers Lew Cody (Joe Lehman) and McClure (Robert Grieg) convince the newly arrived Texas cattle-roper Calvin Jones (Joe E. Brown) to invest 49% ($20,000). (Nevertheless, there is a sour anti-Semitic joke about “the lost tribe” as well as Brown’s wisecrack that reading the menu of the Jewish delicatessen is incomprehensible.)

And, yes, the play which Cody and McClure are certain will be a sure-fire flop turns, as in The Producers, into a hit after Calvin buys out the rest of the shares and—since he no longer can afford new costumes—dresses his small town melodramatic thespians in Shakespearian vestments which convince the audience, just as does Springtime for Hitler, that the dreadful work must surely be a satire.

There’s not much else to The Tenderfoot’s plot except that Calvin falls in love with Cody and McClue’s secretary, Ruth Watson (Ginger Rogers) and when he makes a fortune from his producing activities he is threatened by the mafia; thank heaven Calvin’s an award-winning shooter and carries two loaded pistols with him wherever he goes and that he can successfully lasso even a New York taxi!

I now realize if there wasn’t a minor gay subtext there wouldn’t be much else to even talk about in the movie. And the script really wants its audience to perceive what it pretends to suppress by herding Calvin into the delicatessen where he meets the producers through the sudden appearance of eight cowboys dressed in fleecy chaps filing into the shop. The Texan hick shouts out: “You can stop right here I see some of my own breed over there across the canyon,” signaling that he’s found his own kind—a greeting he might soon regret given that when he yells out “Yippee!” the  gay chorus boys, all looking a great deal like the queer cowboy in Ralph Cedar’s The Soilers (1923), in unison holler back with a flap of the wrists “Whoo Hoo!” “They may be cowboys,” Calvin muses, “but they ain’t from Texas.” 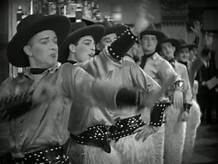 But then, as we all know, he ain’t in Texas anymore! And even from the very first frame we recognize that the actor Joe. E. Brown, born and raised near Toledo, Ohio, is dressed in drag with his string tie and ten-gallon hat that, when his character is transformed into a producer, will dress up in drag again in city-slicker duds, in which Calvin always looks miserable as he struts about in stiff-legged strides through the city environs.

Even if the script makes it clear that Calvin is a heterosexual stricken with love for Ruth, she appears to also be acting in her sexual encouragement just to keep him on the ranch, so to speak.

After she makes it clear that she has just been pretending and declares that he’s been an utter idiot to believe in Cody’s and McClure’s schemes, the almost mindless Calvin buys out the schemers’ remaining shares.

That’s when the new “butter and egg man” in the form of the hotel party waiter comes in. To convince him to invest the needed money, Calvin tells the plot of the old-fashioned melodrama all over again, almost literally pawing the poor would-be producer as he describes the various amatory actions of the poor farmer’s daughter who falls in love with an evil city-slicker and the good-hearted local postman who genuinely loves her. It’s one of the best scenes in the film as Brown playing Calvin puts his arm around the waiter’s shoulder, positions his rubber face smack in front of his prospective investor’s eyes, and drops to floor to declare the character’s love. I could have sworn that Calvin was about to kiss the man, but even in a pre-code flick that might have been going a bit too far. We certainly do come to comprehend, however, just how close the attempts to convince a man to surrender his money to a Broadway play is to courting a lover. If you recall, that’s how Zero Mostel got in trouble in The Producers as well.

Throughout the film, in fact, the overly-excited subordinate partner tosses out one-liners and malapropisms. After swallowing the last remnants of a banana, Calvin queries in Mae West fashion: “If an apple a day, keeps a doctor away—what'll a banana do?” And later, greeting the bellboys, he shouts out “Ejaculations!”

This is, of course, a Hollywood movie and, accordingly, we see no more of the “bride” who has been willing to marry his life-savings to this fellow dreamer. Calvin naturally returns to the Lone Star state with Ruth, at film’s end the mother of triplets. But don’t worry, even if they look a bit like Calvin they’re not really the product of his sperm but are cinematically created homunculi, cloned evidently from fan photos. 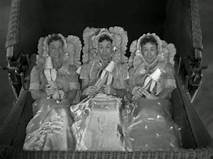 Although this film might have convinced any ordinary producer that it would surely prove to be a flop, Brian Foy, the eldest son of the vaudeville troupe “Eddie Foy and the Seven Little Foys” must have recognized it as perfect addition to the growing list of what would eventually become 241 films that he produced, all grade B pictures. Among Hollywood insiders he was known as “The keeper of the B’s.”