David is only the third short film I have seen by Mexican filmmaker Roberto Fiesco. But I can already generalize in describing him as one of the most talented of visual artists currently making movies.

His films are less concerned with narrative—two of these are simply about unlikely people meeting up to share a few moments of love, and the other is about a violent murderer who kills women because he cannot fulfill his sexual desires with them—than they are about the landscape and look of the places in which their lovemaking takes place. As I mentioned in my writing about his look of his sets and use of color, the closest artist to whom I might compare him is Gregory Markopoulos. And despite the literalness of what exists of story in his works, in the tentativeness of situation and problematics of age and sex between his lovers in each these films, there is something almost abstract in his approach. If we can easily define and locate each object and action of his scenes and characters he somehow defamiliarizes them in way that helps us to feel that we are seeing something never seen before and perhaps never again witnessed. 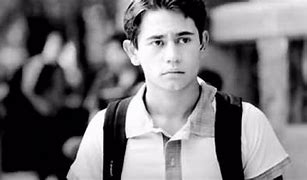 David (Jorge Adrián Espíndola), a young schoolboy who is clearly an aficionado of film, has decided to take off the day from school and, still wearing his book pack, moves off the school yard gates a short ways before he observes an older man sitting on a street bench. He walks a little beyond him, but slowly turns back, rubbing the back of his neck as if recognizing something about the man that makes him stop.

We have just observed the same gentleman (Javier Escobar) looking for work only to find the announcement for a job as advertised in the newspaper being removed from a window placard at the location to which he has just shown up. He crosses it off his list with a look of exhaustion and despair.

The boy suddenly stands next to him, pointing to the paper as if asking if might he see it. But the request, we soon discover, is somewhat of a ruse, for as he sits now next to the stranger it becomes clear that the boy wants to talk, except  for that fact, as he soon makes clear, that he is a mute. The man, José, asks a question to which the boy makes signals that he is unable to speak The man repeats his question louder, the boy responding with a laugh as he brings out a notebook, writing in it that he can hear perfectly, he simply cannot talk. 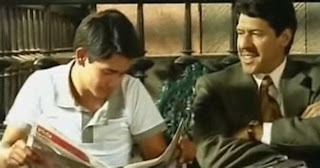 Gradually, the two play a kind of guessing game between them, asking questions and answering them, sometimes with David responding with touch instead of language. It quickly becomes apparent that this man and boy do share something, and before we can even quite identify what it is, we see them checking into a hotel room, where, soon after, they make intense love.

Later that afternoon we see the two of them lying side by side, José awakening and holding the boy to him again before he gets up, dresses, and leaves. David goes to the window and waves goodbye to José now stands below.

Filming up close in such beautiful tones that you almost want to reach out and touch the screen in order to share the momentary pleasures of their bodies, Fiesco turns what might seem to be ordinary event into a nearly miraculous one. But of course it isn’t an everyday event for a young high school student to pick up with a man out of a job and  nearly out of money in order to provide one another with a special few hours that restores both their senses of worth and meaning. David is a treat to the eyes and José, if not a great beauty, is a handsome middle-aged man who might never have imagined himself to be worthy of such a special momentary display of innocent sex. And somehow, given the detail and flow of Fiesco’s camera we feel, even as voyeurs, as if we too had been made privy to something otherwise unimaginable—similar to the way we felt to watch a boy and soldier dance and kiss in a barbershop in the director’s Tremulo of 2015.

These works help you to comprehend just how great cinema can be even in its most fragmentary of manifestations.

Posted by greenintegerblog at 1:09 PM