I have come to realize, particularly when speaking of early 20th century LGBTQ films, that it is important to distinguish between characters appearing in “drag” and those dressed as women or men portraying people of those genders in their roles. The distinction is important because the first assumes its audience knows the figure is pretending to be someone of another gender while the other portrays the actor, even if recognizable, as attempting to convince us that they are of that gender. Today we might express the difference as creating a situation that is close to “camp” humor in the first instance. The reason that Stan Laurel is so funny in That’s My Wife (1929) and Jack Lemmon and Tony Curtis* are absolutely hilarious in Some Like It Hot (1959) is because they quite obviously are not women—even if all the other characters seem to be oblivious of that fact— but are simply “pretending” to be. We wink back at their wink despite the blindness of those they are attempting to fool.

In the early Old Maid films and other one-reelers starring female impersonator Gilbert Saroni, the women he portrayed may look funny, but might be mistaken for ugly women nonetheless, and the humor arises from the appearance and behavior of the female character not from our knowledge that this is a male performing her. In the works featuring Edith Storey, Marion Davies, and Louis Brooks as boys or men, their outward appearances are quite convincing, Davies and Brooks presenting themselves as rather strikingly good looking young men, their intention being illusion not audience recognition of their transformation into another gender. Indeed, although I have included their works in this volume, one might well ask whether these roles have anything to do with LGBTQ sexual behavior. Is a straight man or woman acting as a gay man or lesbian, or the opposite, a lesbian or gay man performing a heterosexual character really any different? Yet in each case the situation calls up a questioning of gender of sexual difference, which is why I’ve determined to include them.

Roscoe “Fatty” Arbuckle’s performance in Miss Fatty’s Seaside Lovers of 1915 is queerly somewhere in between. In this silent work Arbuckle plays the daughter of a rich “mothball” magnate, Mr. Finnegan (Walter C. Reed) who along with Fatty’s mother arrives at a seaside hotel to enjoy the pleasures of the ocean and beach. 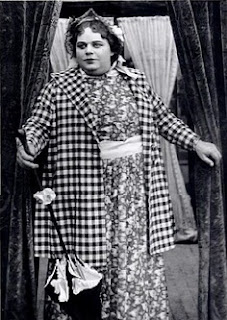 It is not that Arbuckle cannot possibly convince us of being a female—his face is actually rather attractive in makeup surrounded by a curly wig—but strikes us, nonetheless, as a hilarious simply because of her/his weight. Much like Saroni it is this woman’s appearance that occasions the audience’s laughter, not the fact that we see the male actor as preposterous in the role. Someone who had never before seen or heard of the hefty male comedian might see Miss Fatty as simply a buxom, grossly overweight maiden.

Even attempting to remove herself from the carriage which has transported her to the seaside hotel is a near impossible task as she pulls and pushes in both directions in an attempt to extract herself from the vehicle’s narrow confines.  She finally comes out backwards with a big, dusty flop onto the street, as the so-called “mashers” rush to upright her, she, in response, kicking them with front and rather delicate back-kicks for their efforts, perceiving them evidently as being after only her father’s money in their attempts to court her. 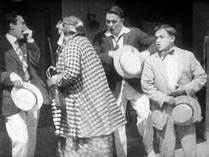 Later in her room, the three suitors again attempt to one more please her, one playing the piano while the other two dance with her that reminds one of “ring-around-the rosy” until her kicking, hitting, and spinning them out of control ends with the two landing up in a pile of the floor, at which point her father throws them out, following it soon after with the defenestration of the piano player.

Indeed, much of the humor of this short arises not as much from Miss Fatty’s appearance as it does from the fact that such an enormous log of a being is so amazingly agile, even acrobatic. Mack Sennet recounts his first meeting with Arbuckle remarking that he "skipped up the stairs as lightly as Fred Astaire" and "without warning went into a feather light step, clapped his hands and did a backward somersault as graceful as a girl tumbler."

Arbuckle’s absolutely elegant back kicks, swift turns, and slaps of her three suitors is at the heart of the comic pleasures of this otherwise not so very funny skit. This work provides the perfect example of what is described as “slapstick” comedy.

It helps that the three “mashers” are played by the great Harold Lloyd, Sennett Studio regular—remembered by many, despite his more than 500 other on-screen roles, as the lemonade vendor harassed and provoked by Harpo and Chico in Duck Soup (1933)—Edgar Kennedy, and regular Arbuckle antagonist Joe Bordeaux.

Silent screen character actor Billie Bennett plays Miss Fatty’s mother, Mrs. Finnegan. After Bennett stopped acting she opened a renowned high class bordello in Los Angeles—in which the prostitutes were made up and even surgically transformed to look like famous actresses of the day—that catered to MGM out of town and international distributors and exhibitors. 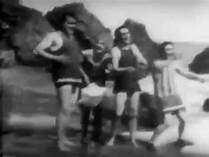 The big event of Miss Fatty’s Seaside Lovers occurs when she dons her extra-large stripped swimming suit, delicately holds a tiny toy umbrella. and lumbers to the beach. Inexplicably choosing a rock on which to sunbathe, she is suddenly surrounded by the incoming tide, being eventually washed from her former resting spot. Going down into the ocean depths several times, the young Miss Finnegan cries out for help, one of the three suitors attempting to rescue her with a small boat that one readily perceives will have a great difficulty holding Miss Fatty’s girth. She crawls onto the rowboat only to be washed overboard once again, this time the “surf cops” attempting to save her. The surf, however, apparently, is growing wilder with every moment, and they too fail to rescue the maiden.

Eventually she swims in by herself, angrily assaulting her first would-be savior (Bordeaux) by picking up and throwing him far out into the waters, where he struggles to save himself as well. When she discovers that her parasol has been broken, she breaks into tears, hugging the two remaining mashers closely to her chest.

*I just realized while writing this that in Some Like It Hot Lemmon’s Daphne, given Lemmon’s totally masculine face, is clearly a man playing a woman in drag, while Curtis is so pretty as a male that he looks quite lovely as Josephine, somewhat resembling someone like Eve Arden. This perhaps explains why Wilder and co-writer I. A. L. Diamond kept shifting Curtis in and out of male attire throughout the film, to remind the audience that Curtis was, in fact, a man. 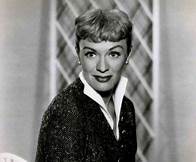