Sharlin Lucia | In Einem moment (In a Moment)

The coming of age gay short by German director Sharlin Lucia is certainly not original. Like so many other films of its kind, a young school boy, Max (Björn Jochum) arrives at a new school with fear and trepidation. But here he is met by several students willing to be his friends, including Anna (Juliane Selesnew) and a young basketball player, Leon (Aaron Rufer). Although Anna seems to be an all too ready girlfriend, it is the beauty of Leon that most strikes Max, as it does apparently all of the girls in school in well.

Moreover, Leon seems utterly willing to strike up a friendship, asking about Max’s interests—which seem to be mostly musical— without feeling any of the US high school confrontations given that his passion is basketball. Indeed, he encourages Max to perform in the open mic night of school musical performances.

For Max, his sudden gut response to Leon’s open friendship is immediately confusing, especially when Anna tells him that Leon’s “not into to girls.” At home, later in the week, he can hardly eat a meal, while his macho father (Christoph Nitz) drills him about whether he’s met any interesting girls yet, suggesting that by his age he had already had several girls.

Max’s mother (Stefanie Renk) reminds him that his father, who has by this left the table for the TV soccer game, is just boasting. “You know how he is/” He didn’t have a girlfriend until he was 17, she consoles him. “You’ll find the right girl when the time comes,” she further tortures him with her reassurances. Max hurries off to bed.

Working on a composition in the classroom before school begins, Max is disappointed with what he has written so far. A sympathetic teacher (Frank Katatsch) suggests he write something honestly from the heart, even if it feels uncomfortable. You never know how it will affect people, he optimistically agues.

In the meanwhile, Leon has invited him to play three-man basketball with another friend, an invitation which Max willingly accepts. Remarkably, Max is not at all a incompetent sportsman, stealing the ball at one point and putting the ball through the hoop at another moment. More importantly, he actually makes contact with the handsome Leon, who readily pushes back, the two temporarily falling to the ground with Leon, on the top of him, about ready to plant a kiss upon Max’s lips before the friend calls out, “Are we hear to make out or play ball.” Suddenly Max pulls away and reports he has to go home, leaving Leon a bit confused. 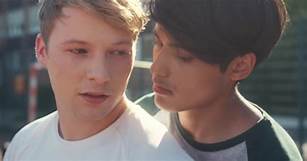 But, obviously, it is Max who is confused, taking a long shower as he replays the scene with Leon over in his mind, finally producing a wry smile upon his face.

In the next scene, he has evidently just played the song for Anna in his bedroom, who suggests its truly a beautiful work, but adds: “Do your parents know?” If nothing else, we now know that this song is for Leon.

Bravely, Max’s parents in attendance, he performs the song at the school event, a quite lovely musical work about how he has long protected himself in a fortress but with the love of someone he’s met can now leave it and join the world—composed by the film’s cinematographer (and evidently makeup artist) Paul Schiefelbein. It is this gentle “coming out” song that really makes this film somewhat different, somewhat similar to the country western performer Will Worthington’s revelation in the TV series Nashville of his gay sexuality through music.

His school mates enthusiastically applaud the song and its message, which emboldens Max to walk down from the stage and shyly kiss Leon in front of his peers and parents both. Max’s mother smiles in pride and even her husband can’t help but share a reluctant grin.

Numerous other films have shown us far darker pictures of LGBTQ sexuality in high school halls and locker rooms—just yesterday I watched a locker room murder in a short film in which the boys had loved each other since their childhoods. But we need more of this far gentler kind of cinematic depiction to remind us that discovering one’s sexual identity to be queer does not have to result in emotional trauma.