Despite its rather romantic comedy-like title, Strawberry and Chocolate is a film with attempts to discuss what being gay in the Cuba of the late 1970s meant in  a more serious context.

Unfortunately, the film has problems getting there. At least early in the film when actor Jorge Perugorría plays his central character Diego in a far too fey manner, almost creating a kind of stereotypical gay man as he bets friend/lover German (Joel Angelino) that he can seduce the beautiful doe-eyed boy, David (Vladimir Cruz) who the two have just spotted in Havana’s Coppelia (the city’s grand ice cream parlor).

Diego’s somewhat effeminate manner as he brazenly sits down with the boy to order up strawberries—which he argues are the best thing that Cuba still produces—as opposed to the chocolate which David is spooning, is definitely the wrong approach to take in seducing this straight, slightly homophobic, dedicated Communist university student. 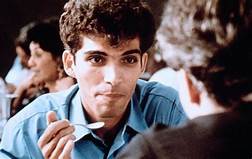 Yet somehow Diego knows more about David than seems possible as he attempts to lure him to his apartment first by promising to loan his precious books of major Spanish-language iconic writers such as Mario Vargas Llosa, Juan Goytisolo, José Lezama Lima, and Severo Sarduy (the latter two renowned Cuban gay authors, while the Spanish writer Goytisolo is also gay) and claiming to have photographs of David performing as Torvald (although there’s a suggestion that he might also have played Nora) in Henrik Ibsen’s A Doll’s House. How he knows that the boy, studying politics, is secretly a would-be writer and that he has performed in the university production of the Ibsen’s play is never explained. In fact, he has no photographs. And the incident is never mentioned again. Something perhaps has been lost on the cutting room floor. But it leaves a rather sour taste in our mouths since it may suggest that Diego has been trailing David for some time, not at all the later Diego we come to know. 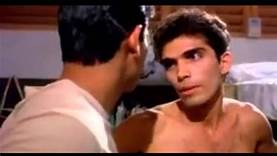 Once he has gotten his Torvald into his lair of literary tomes, however, and “accidently” spilled coffee on the boy enabling him to remove his shirt and hang it from the balcony—a sign to German and his other gay friends that his seduction has been a success—there is no turning back, despite David’s increasing disdain of his host; upon discovering that Diego has no illicit photos of him, he announces that he wants nothing more to do with the “fag.”

Diego, who along with his artist friend German is pretentiously religious—he uses it more as an act of cultural rebellion one suspects that out of true belief—prays to one of German’s religious sculptures that the boy will be brought back to his flat. But it is not the gods who draw David back, but curiosity, the books he has seen, and the music (such as Maria Callas sing from Verdi’s Il Trovatore and “Adios a Cuba” by Ignacio Cervantes) and, almost as importantly at first, the challenge by his roommate Miguel (Francisco Gattorno) to spy on Diego, who as a gay, highly literate man who openly disobeys political dictates is automatically suspect.

Although Miguel is a stalwart Communist ideologue, writer Senel Paz and directors Tomás Gutiérrez Alea and Juan Carlos Tabío also hint that Miguel is possibly attracted to David as well and is curious about Diego not simply because of his anti-political views but his sexuality. In a sense he sends David to Diego both as a kind of buffer between himself and his desires but also as a subtle “test.” 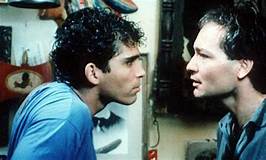 And so, the directors have created a kind of structural device that works perfectly to bring these two very different people together—an innocent boy (who incidentally has just been dumped by his female lover, Vivian [Marilyn Solava] in order to marry an older and wealthy man) and an intellectual mentor—creating a dialectic which is intended to explain contemporary Cuba politically and culturally both.

The problem here is that neither the Marxist-Castro rhetoric that David spouts or the literary lessons that Diego would teach his beautiful youth amount to anything more than clever name-dropping. Diego mentions John Donne, the novelists I mention above, musicians, and, occasionally, visual artists, but their contributions or even their own values are never discussed. David’s talk of the needed failures and continued new beginnings of Cuban communism sounds more like Mao’s philosophy of eternal revolution than Castro’s radical versions of Marxist theory.

Of course, to actually talk seriously about these subjects might make for a terribly intellectual but equally terribly boring story. What these two do both share is a love of Cuba, and gradually, over their many comings and goings and agreements and arguments is a love for one another, a love that necessarily transcends sex.

What we also discover is that Diego is just as much an idealogue for free-thinking and open-mindedness as David is for the Party line. Fortunately, they are changed by their encounters—Diego, since David demands that he use no pet names or camp slang to describe him, dropping his clever repartees and some of his artificially swishy gestures, while David slowly grows to admire how bravely Diego stands up to a government that would like to wish him out of existence.

Inevitably, Diego’s brave tactics get him into trouble both with his friend German—who is willing to sell out by accepting an offer to show a few of his works in Mexico as opposed to a full Cuban gallery presentation—and the governmental authorities after he sends a letter of protest on behalf of their refusal to show German’s art, which results in his inability to partake of any employment except as a laborer.

David meanwhile comes under question for his quietude around his school mates and outbursts of support for Diego when he comes under attack. He even begins to bring flowers to the beloved friend with whom he will never have sex, and rumors have arisen that he is having a homosexual affair with the man he was supposed to be investigating.

As it becomes clear that Diego, like so many other Cubans who left their country under duress, will have to immigrate if he is to survive, he attempts to keep his departure secret, asking his neighbor Nancy (Mirta Ibarra), rumored by neighbors to be a whore, to look after David and even introduce the still virginal boy to the pleasures of sex—which for him may be the greatest sacrifice of all.

In one last whirl of sensual joy, Diego fixes a huge Lezama Lima-style dinner (the movie does not explain that the great writer was a man of enormous girth known for his gastronomic appetites) and a tour of what is left of the old architectural wonders of Havana. By this time we’ve become so charmed with the duo that we don’t even mind that the film has eroded into something like a simple travelogue. As Diego looks at the cities treasures with the eyes of someone for whom they will soon be lost, David, now in love with Nancy, sees everything with the eyes of a youth being thrilled to have his whole life laid out before him.

The final scene wherein Diego, about to leave, breaks down and admits his original plan to seduce David—admitting that he has himself unwittingly helped put the boy in jeopardy by allowing the rumor that they were sexual partners to prevail—seems a bit tacked on. We already know all this, as David now must as well. Yet it allows Diego finally to admit that he couldn’t bring himself to deny the rumor because of the deeper truth that he truly has fallen in love with David; and it allows David finally to stand up and show his own love, for the first time in the film fully touching Diego as he embraces him in a deep hug. If this isn’t truly what queer love is all about, then I should perhaps immediately stop the arduous task before me of seeing and sharing every movie that represents LGBTQ lives and loves that I can.

One of the very first of Cuban films to feature a gay character, Strawberry and Chocolate won the Goya Award for the Best Spanish-Language Foreign Film, a Sundance Film Festival Special Jury Prize, and the 44th Berlin International Film Festival’s Silver Berlin Bear award and a Teddy (awarded to films with LGBT topics). It was also nominated for Academy Award for Best Foreign Film.

Posted by greenintegerblog at 8:26 AM