Van (Norman Reedus), a high school swimming champion, and his family lived in a beautiful lake home in an area that serves as a summer resort. He had plans of going to college, and his life seemed quite perfect until his father (Will Lyman), struggling with alcoholism lost his legs in an automobile accident, with Van’s mother determining finally to leave both behind taking most of their finances and ownership of the lake-front home with her. Van, left behind to care for his father in the run-down cottage where they now live, has basically given up all his plans, somewhat grudgingly befriending two local petty thieves Jason (Jonathan Quint) and Flip (Josh Marchette). Whereas his family were once recognized as leaders among the local year-long residents, they are now seen as outcasts, and even Van’s former girlfriend, Julie (Sybil Temchen), now a college girl, has given up on the boy she considers a loser. 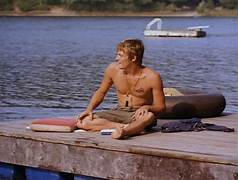 William Roth’s beach-side version of this “town and gown”-like story pits the all-year locals against the summer visitors whose lovely homes are those whom Van’s buddies regularly burgle using Van’s former family home as a place to stow their stash of stolen TVs, recording devices, computers, and stereos. That is until Van’s vanished mother rents out the place to a university swimming coach (Bruce Kenny) and his family which includes his son Doug (Chad Lowe), a champion swimmer on his father’s university team. To Van, Doug and his family, now inhabiting his former home, seem to represent everything to which he had once aspired.

Unfortunately, Roth’s otherwise likeable film from 1997 relies far too heavily on the simplistic values of normative society, setting up issues between those with wealth against the lower middle class, those academically educated vs. the working class, and the superficially lawful against those who live by their own rules to be able to thoroughly explore the far more interesting themes of which the movie hints. 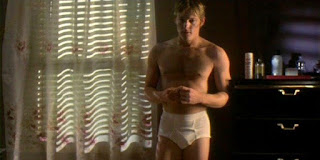 It’s almost as if Roth took the template of Peter Yates’ 1979 film Breaking Away, determining to portray a showdown between that film’s Dennis Quaid character Mike and its hero Dennis Christopher’s Dave Stohler, but forgetting to add in any of the latter’s queer and almost comic obsession with Italian cycling. Reedus has all the brooding charm of Quaid, and Lowe also has a queer obsession—he’s a closeted gay boy—but has little of Christopher’s loony charm. And in this case the one who wants to truly “break away” and go to college is Reedus’ Van, not the already locked-in college boy Doug, who would love to escape the judgmental abuses of his homophobic father/coach. Both boys have father problems, but in the end it is clear that the wheel-chair bound alcoholic is far superior at parenting than the athletically fit and spiritually upbeat swim coach. And unfortunately that is the box into which Roth has steered his cinematic endeavor.

If Van and his errant friends first pretend to take a liking to the new boy Doug simply to be able, metaphorically speaking, to “get into his pants”—to find a way into the house in which he lives to retrieve their stolen loot—Van, who has not been directly involved in any of the lefts, takes a special interest in the boy, in part because of Doug’s open-minded friendliness, mostly evidence of his desperation to be liked. The two share a love of swimming, but also it is clear that the new boy represents all that Van has dreamed of becoming, a college swimmer with enough financial support that girls like Julie might fall in love with him. 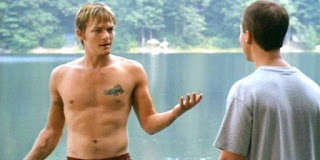 You have to give the director of this work credit, however, for stirring up the waters just a bit in having their friendship slowly boil over into something else, Doug’s homoerotic attraction to his new friend, and Van’s not even minding terribly when he discovers, through a hidden magazine under Doug’s mattress that his swimming chum is a homosexual.

Doug’s father, seeing that his son has taken up with a far more masculine and, in his thinking, “normal” boy, forces a kind of son/father showdown by offering Van a swimming scholarship (talent unseen), which pits Van’s love between the father—who offers him everything he desires—and the boy in the flesh, an unhappily trapped figure caught in the mesh of his family life. But even then Van seems to chose Doug over his friend’s father—or even his own father as he plans to steal his dad’s small hand-painted soldiers, worth a significant sum of money, so that he and Doug might run away together. 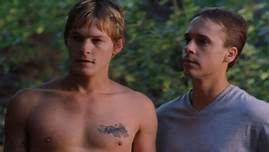 That indeed might have made for a truly remarkable movie, the handsome straight James Dean-like figure running off into the void with a frightened gay kid—and without even a Nathalie Wood to come between them. But Roth both narratively and visually throws in the wrench at the very last moment, inexplicably having his hero change plans to find another victim instead, requiring Doug to get drunk, and as the police close around them, to drown him in the waters where he once so gracefully swam. Van comes home to a father to which he is now symbolically wed, the older man suddenly able to strap on his prosthetic legs just in time to hobble over and put an arm around the boy he has always loved.

Another gay man evidently needed to die for the sentimental myth of normative life. Sorry, this just doesn’t float for me this time around.

Posted by greenintegerblog at 5:28 AM