returning to the closet

The Spanish comedy Amor de hombre, titled alternately Love of Man and the quite inappropriate Manly Love, while featuring characters who are actively gay, focuses on a relationship between a man and a heterosexual woman who, if not for their bedroom desires, might make the perfect married couple. The close female friend of a gay man unfortunately has long been labeled a “fag hag,” a word usually suggesting a rather unattractive woman who finds the attentions of a good-looking homosexual male far more desirable than the rejection she receives from heterosexual men and even other more eligible female acquaintances.

Esperanza (Loles León), whose 40th birthday celebration begins this film, is certainly a little overweight and has long had difficulty in finding dates or even one-night stands, but this redheaded  woman is quite beautiful and vivacious, clearly a popular schoolteacher admired by all of her friends, who just happen to be mostly gay—perhaps because the gay men with who she hangs out, particularly her beloved Ramón (Andrea Occhipinti), are all better looking and friendlier than the heterosexual men she meets. León, indeed, is so fresh and appealing in her role that perhaps we can finally retire the ugly label applied to such women and seek out new ones to describe such hetro-gay friendly acquaintances. 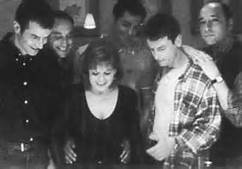 Yet both Esperanza and Ramón, if only might be able to enjoy each other in sex, would have long ago exchanged rings, even if Ramón’s seemingly unquenchable search for sex partners might have made any long-term relationship impossible. A successful lawyer, Ramón often shares his evenings with loyal friends, a doctor who picks up tricks at the hospital, a devoutly religious man whose sexual proclivities are declared as sinful, and two friends who have been together for 10 years but, like many long-time couples, constantly fight. Like him, Ramón’s friends are all professionals, intelligent and likeable, despite their quirks.

Ramón himself is nearly a drop-dead hunk who is able nightly to bed male beauties who, as David Rooney, writing in Variety, observes “he ushers out the door before the sheets have cooled down.” In one comic scene, when he cannot immediately get one of his dates to leave his bed, he calls in Espe to pretend—evidently not for the first time—to be his aggrieved wife returning home to discover her husband in bed with another man. Esperanza not only portrays a woman horrified and aggravated, but throws in the existence of a suffering child to help rid Ramón of his friendly pillow-mate. If Occhipinti’s character were heterosexual we would describe him as a rakish womanizer or something worse.

Inexplicably, despite his ability to trot out the best-looking candidates in Madrid, Ramón, even more than Esperanza, is desperate to fall in love with a gay version of her and settle down into a permanent relationship. Frankly, given what we observe of his behavior his stated desires appear to be somewhat fraudulent. And, to make things worse, this otherwise quite pleasurable work takes up as its major theme Esperanza’s determination to find the man she loves a perfect male companion, turning what may have been a gay farce in the mode of the works of Pedro Almodóvar into something a bit more perverse that reminds one of Rock Hudson’s attempt to find his wife the perfect second husband upon his impending (if only imaginary) death in Send Me No Flowers (1964), allowing the closeted gay actor to droll over the men throughout before joining his best buddy next door in bed. 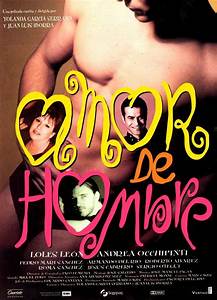 Esperanza, of course, has no intentions to bed any of the young men she checks out for her Ramón, but in the process she does experience the difficulties of gay life in a far deeper way, perhaps, that her friend has ever endured. Rudely dismissed by handsome men already in relationships, men who prefer their lovers in chains and leather, and various others whose sexual quirks are far more important than any permanence in love, Espe attempts to return home empty handed, only to be robbed by a young gay man who leaves her without money or the keys to get back into her own apartment. She stops by Ramón’s place only to find him in bed with another cute stud whom she mistakenly believes is the same boy who just robbed her.

At another point, after Ramón picks up a lovely motorcyclist, the two of them being immediately struck by a car, she moves in with her recuperating friend to nurse him back to health, eventually hooking him up with the handsome gay physical education teacher from her school to provide him with massages for his sore back and neck.

This time, apparently, the hook-up works, at least with regard to Ramón, who quickly falls deeply in love with his temporary masseur Roberto (Armando Del Rio), but in this instance the beauty does not at all return his admiration. Perhaps, we suspect, that has been the “chase” of another—the difficulty in courting another man—that Ramón has all along been seeking. Certainly, that is what Hudson must have felt, in part, regarding his endless attempts to woo Doris Day in his 1959 film Pillow Talk.

In this case, however, Esperanza’s well-intentioned efforts to link up her friend with a suitable partner result in a near complete severance of her relationship with the now love-sick Ramón, who drops all of his friendships in order to court Roberto. Espe and her friends are finally convinced that Roberto is living with a wealthy older man, which explains his diffidence to Ramón. And we recognize that she is probably correct in her suspicions when the physical ed. teacher suddenly shows up at Ramón’s place, ready and willing to commit himself to the lawyer’s loving charms.

If one might have thought this to possibly end Ramón’s isolation, it only increases it as, without his knowledge, the new lover deletes all telephone messages and refuses to join him in any get-togethers with Ramón’s old friends.

Without any one to care about and mother other than her students Esperanza finally does date other men, even finding, she claims, some sexual satisfaction. When, after donning a blonde wig in her loving student’s don’t even recognize her, she determines to take a long-needed vacation to the beach, but cannot get Ramón on the phone to even tell him of her departure.

Inevitably, after being visited by Roberto’s former lover, Ramón discovers the truth and realizes just how he has been manipulated by the man with whom he has been determined to spend the rest of his life. And the last scene, filmed near the ocean, returns us to a situation very much like the earliest in this film, with Ramón having joined his female companion on what has now become “their” vacation. Perhaps he has been in the kind of relationship for which he has been seeking—as sexually unfulfilling as it is—all along. Certainly, in this sense, Love of Man ends up very much like the kind of chaste male-female relationships subliminally presented as models in the Hudson-Day movies of the late 1950s and early 1960s. In nearly all of these works any sexual adventures, often with gay overtones, that Hudson’s characters explored in his films, forced them by the end of the movies to return to the closet in which the real actor lived, kissing the difficult to win blonde with a happy-ever-after smile. 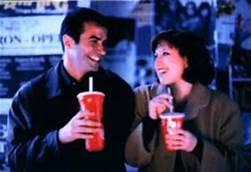 So too is Ramón and, significantly Esperanza, discovered to be living at the end of Love of Man in a paradise in which no one can ever truly be happy. Despite Serrano and Iborra’s seemingly smart and au courant gay work, their central characters seem locked into a conventional situation out of the past. Ramón might have taken a lesson from his doctor friend, who claiming to have given up any interest in permanent relationships, has by film’s end taken up housekeeping with one of the lawyer’s former clients who came to Ramón determined to divorce his wife because she seemed no longer seemed interested in him only to discover that it was he who was no longer interested in her, in the process coming out of the closet with the help of the doctor’s friendly advice. The two of them, the deliriously-in-love neophyte and the long ago disillusioned older man seem to be a happier couple than any other figures this film puts before us.

Posted by greenintegerblog at 8:04 AM