Adam Baran’s eight minute Love and Deaf is, unfortunately, one of too many LGBTQ short films based on a two line gag, this beginning with a question: “What do you do with a Chatty Cathy?”—the camp name based on the blonde haired, blue-eyed Caucasian doll born in the Mattell Toy Company in 1959 who lived a mere six years in the arms of young girls throughout the US.

Joe (Rich Delia) is a cute gay man who evidently simply cannot stop talking even while his lover Brad (Brett Hemmerling) is performing fellatio. So fed up with the constant discussions of invitations, previous boyfriends—who obviously suffered his previous bouts of logorrhea—and whatever passes through his lover’s head, Brad determines to leave Joe in the very first moments of this work, frustrated that even while he attempts to describe the problem to the boy he thought he loved, Joe pushes back with further regrets and explanations, promising to stop talking. He later says to himself, “I don’t talk so much. If anything I don’t talk enough.” Enough said.

We next see Joe our on the New York Streets walking through a park where he decides to visit the local public bathroom. I don’t know where Joe has been up until this morning, but he seems totally unaware that the NYC public loos are a notorious visiting spot for men seeking gay sex. 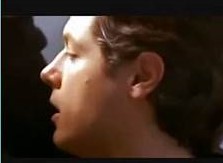 When he observes that the man in the next stall his signaling with his finger through the open glory hole, our talkative babe-in-the-woods, not missing a verbal beat, responds “Hey there. Something you need?” The appearance of lips and tongue planted up against the hole doesn’t quiet him as he asks “Are you sure?” The finger signals him on. But even then his tongue finds no pause, “All right, I’m sending it your way,” as he finally unzips his pants and places the penis into the place for which was created.

To his surprise and, perhaps for the first time in his life, the sex is so very perfect that the can only groan in pleasure. “Wow,” he declares, “that was amazing! Seriously man I’ve had blow jobs before but that was incredible. That was the best blow-job I’ve ever had!”

The next line is this little film’s reward: “Hey, you wanna go out some time or do you just do bathrooms?”

Only silence greets him. But finally a small card is pushed through the hole—drumroll for the second line of the skit—“Dear Sir, I am deaf. Thank you for everything. Have a nice day.”

At the very instant that Joe reads the message, the stranger bolts out of the bathroom, Joe in pursuit. He chases down a park path and eventually runs into an entire group of handsome young men gathered in two rows, a tour guide on their side who tells Joe as he signs, “Wherever you were, you make everyone wait. Next time please be quicker.” The camera pans to one of the group whose tea-shirt reads “Queers without Ears.” The impatient tour guide speaks and signs yet again: “Are you coming or aren’t you?”

Our flabbergasted hero pauses, looks again at the group, and smiles, joining in their tour recognizing the red-cheeked handsome boy as his bathroom friend. Speechless for the first time in his life, Joe takes the hand of his new boyfriend and walks off with the others in perfect bliss.

This trifle might be the perfect match for a double-billing with Robert Fiesco’s short David of the same year, which features a gay boy who can hear but cannot speak.

Posted by greenintegerblog at 7:07 AM