Andrew Porter | Nobody I Know

the mum from hell

Andrew Porter (writer and director) Nobody I Know / 1997

In Australian director Andrew Porter’s 1997 short comic film Nobody I Know, a cute younger man, Tom (Drew Proffitt) attempts to bring home a rather handsome older boy, whose name we later discover is Matt (Frank Roberts). The rather dilapidated homey hovel, consisting of three small bedrooms, a living room, kitchen, and bath is where, so he tells Matt as Tom briefly strokes the stranger’s hairy chest, he lives with his sister.

The room to which Tom takes the pick-up, as he himself puts it, is a “pigsty,” which he quickly attempts to clean up while Matt goes to the bathroom, not to urinate—as we might suspect given that they have only a couple of beers left from a six-pack—but to wash his feet, signaling perhaps that Matt might even be homeless or, at least, a vagabond of some sort. 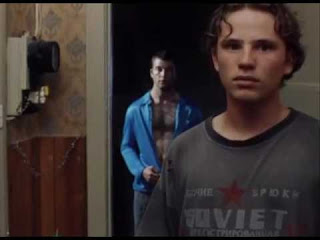 In the brief kiss he shares with Tom, however, we recognize that for the younger kid he represents a dream of sexual bliss. While Matt washes, Tom puts on a pot of water in the kitchen. When Tom returns they begin their love-making over again, Matt undoing his shirt and pulling Tom in to his crotch with his feet...until suddenly a preteen girl enters determined to get her “Coco Puffs.” She’s obviously the sister (Rebecca Stockley) Tom has mentioned, a bratty and inquisitive child who Tom attempts to send back to bed, particularly after she points at the stranger demanding to know, “Who’s he?”

As Tom his just about to pull open her door to deposit her back to her bed, she escapes, daring evidently to do something terrifying in this small dump, to knock on the door across.

Out comes the mysterious ogre of a  mum (Carmel Johnson) of whom Tom has said nothing, racing to the kitchen to turn off the now boiling pot of water and to encounter the intruder in her house. She immediately proposes to put him up on the pull-out bed of the living room couch, Tom insisting that he prefers sleeping on the floor beside his own bed. That “pigsty,” she barks.

Matt quickly tries to make an escape, but she insists that he stay, pulling out the bed and covering it with sheets, a pillow, and a coverlet, Tom scurrying off to his own room in embarrassment and, more obviously, in frustration.

Matt is deposited in the couch’s hidden bed, while the camera follows her back into her own tiny warren where she takes out a cigarette and, leaving the door slightly open, listens for any sign of Tom attempting to join his new friend or Matt trying to slip into bed with her son.

When she finally hears footsteps she enters the hall and observes, as she exists the back door, the half-dressed Matt hurrying off. She checks on her son, angrily glowering at her as she throws a pillow he had planted on the floor at him, the screen turning black.

Once again, it appears, she has succeeded in keeping her son from committing any perverse actions with what one imagines to be a regular retinue of unknown guests. In the closing song, “Narrow,” by Mel Watson the singer tells the boy “to try to keep on trying.” But it’s doubtful poor Tom will every find a man willing to run the gauntlet into his bed. It is almost certain that Tom will never come to know any body.