the film is a mensch 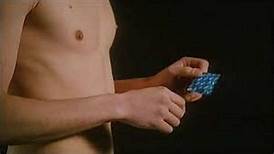 Suddenly the narrator along with the visual image shifts to a hevea tree, which produces latex which, as we know, goes into the making condoms. Showing a picture of a male nude, the narrator declares of the object in his fingers: “This is a condom.” Condoms, the voice-over explains, are used, for example, to prevent conception when two heterosexuals make love. At that very moment the film displays an erect penis upon which the condom is placed.

“Otherwise,” the narrator continues, “Catherine and Laurent would have dozens and dozens of children. Which is impossible because their car is too small.”

The image shifts once more to nature where the narrator takes us from one tree to many, a group of trees, he posits, being called a forest. A group of people often make up a march, in this case many homosexuals celebrating in a Gay Pride parade. It is a demonstration by Vincent and his friends, asserts our disembodied voice, to show that they exist and to claim the same rights as heterosexuals like Catherine and Laurent. This proves that homosexuals have a lot of humor, the unsaid presumption of course being that Laurent and his friends are therefore human beings.

Two nude figures running near the forest reveal that Catherine and Laurent are not at the march. “They are in the forest and are going to make love.” Like most human beings they regularly make love, except for,” our narrator notes, “the astronauts on Soyouz 27—my own addendum: for those of you who may have forgotten, Soyouz 27 was the 1978 Soviet crewed spacecraft which flew to the orbiting Salyut 6 space station—“junior majorettes, and Jean-Paul”—who was the Pope of the Roman Catholic Church from 1978-2005.

Dimitri and Igor, the cosmonauts aboard Soyouz 27, so we are told, are heterosexuals, and heterosexuals of the same sex do not make love together...the narrator pauses...“unless the mission is prolonged.”

And here this charming philosophical treatise collapses into something quite different from what so far we have been lead to expect, noting that Igor has forgotten the condoms so Dimitri is sulking. The junior majorettes don’t make love, the narrator argues, because they are too young. In the new illogical logic which narrator has now established, John-Paul is described as being “a rare and resistant (they show him being shot in an assassination attempt in 1981) being called a Pope. He lives in airports and with invisible beings in space, sorts of cosmonauts.”

The film shows a junior majorette, Julie, who also communicates with individuals in space (the film shows several cartoon heroes behind her) but she is not a Pope. Deductive logic falls apart.

The Pope, it goes without the narrator saying it, believes in neither condoms nor in homosexuals like Vincent.

Meanwhile, in order to avoid thinking of Igor, Dimitri has hung pictures of majorettes in his bedroom on Soyouz 27. Yet we are told there are no real majorettes in space because when you throw a baton it does not fall back. Besides booties, worn by majorettes, are outlawed in outer space, just as we might remind ourselves without the narrator needing to bother, are condoms and homosexuals outlawed by the Pope.

The narrator now reveals that this may be the last time that Vincent attends the Gay Pride parade since he is ill. “Vincent has AIDS. AIDS is a killer disease transmitted by blood and sexual secretions.” John Paul is old. He will soon die. Vincent is young. He will soon die. Deductive logic has no power in the world in which AIDS exists. The narrator cannot offer any further rational deductions, so we are now forced to make our own.

Evidently, Vincent has not used a condom, perhaps become the Pope has outlawed them. And now Vincent is going die at age 20, and being a human being, he knows it. He soon will no longer exist, despite all his and his friends attempts to declare that homosexuals do, in fact, exist.

A bootie is also a slang word in English for the ass, which is the entry, for most gay men, of sexual secretions. Igor and Dimitri would not need condoms in space if there were no AIDS because they would not have children, who generally know nothing about death until they grow up. Even though we know gravity exists, it does not exist space, where the invisible beings with whom the Pope communicates are believed to exist.

And while homosexuality is not permitted by the Pope, a cosmonaut can still imagine having sex with a child majorette.

Posted by greenintegerblog at 4:36 PM