David Tjen | It Gets Better

the floor is hard to forget

David Tjen (screenwriter and director) It Gets Better / 2014 [5 minutes]

Indonesia-born US director David Tjen’s short film It Gets Better might almost be seen as a poster for young LGBTQ kids experiencing the bullying of their high school years. With composer Skylar von Joolen’s soaring score, and the quick cuts of the film’s young hero, Pierre (Guilherme Scarabelot) being thrown to the floor by the archetypically homophobic jocks of his school, we hardly get a second to adjust to his momentary eyes-only romance with the closeted school jock, Adam (Jason Berrent) before—in the very midst of what appears to be a stand off a moment prior to an expected gay bashing—the handsome jock locks his lips around Pierre’s in a deep kiss. 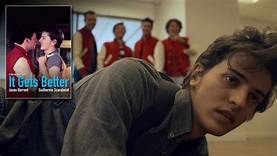 Pierre has just uttered the now standard cliché “It gets better,” although how he might know that in the midst of his school mates’ taunts is never established. Perhaps Adam is just relieved that someone has figured out his sexual desires and is willing to reassure him that it might be fine to express them as long as no one else is around to observe.

Five years later the two meet up again in a coffee house, Adam now clearly out of the closet and interested in hooking up with his former high school flame. The two lock hands this time instead of lips as the music swells up to a saccharin end. 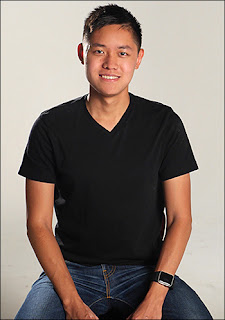 Although Tjen has since become quite famous for his Good Mythical Morning show on YouTube and other projects such as the New York Film Academy’s Games on Twitch , he still remembers the 2014 5-minute piece, so he has noted in an interview with Carin Chea as one of his favorite moments in his career to date. Certainly, it represents a moment of euphoria in a sea of seemingly endlessly sad coming out fragments.

Yet, I can’t help but think of the openly gay kid sprawled out on the classroom floor, while the closeted jock, playing at being a heterosexual, seems to have come through it all without even a scratch thanks to the peer acceptance of the school “fag.” I’m happy they’re both so happy by the end of this breathless little hors d'oeuvre, but I can’t quite get over the feeling that’s it’s all just a little puff. Even when you quickly scramble up and walk away from inexplicable hate, you can’t quite get it out of your head any more than a closeted gay boy can ignore his secret longings. And, although Pierre is strong enough to be able to forgive his new lover’s former hypocrisies, turning away from him at the very moment when the outstretched hand might have represented a true link to another human being in the high school daze, not everything in life, alas, “gets better.” And we can only wonder how the former jock will stand up to the adult challenges he will surely face.

Posted by greenintegerblog at 5:21 AM