Derek Jarman | The Queen Is Dead

For decades Morrissey had been enticing young British and US followers with his and The Smiths performances of songs that blurred gender boundaries and toyed with vaguely homoerotic narratives. Finally in his 2013 Autobiography he admitted to having had a long term relationship with a man. Yet even then the formerly declared “celibate” hedged his sexual bets by describing himself as “humasexual,” presumably suggesting that he was bisexual or possibly tri-sexual if he dared explore relationships within the Q factors of the LGBTQ sexual community. As one entertainment outlet put it, “everyone rolled their eyes” as if to ask, “so what’s new?” 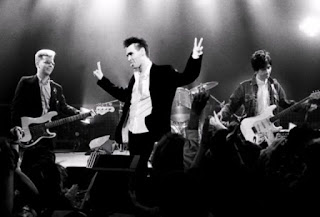 In a sense, it doesn’t matter, for The Smiths’ work had always toyed with cross dressing and adolescent sexual angst, particularly in their 1986 album The Queen Is Dead for which the out and proud gay filmmaker Derek Jarman filmed a fascinating music video which included three songs from the recording, the title song “The Queen Is Dead,” “There Is a Light That Never Goes Out,” and “Panic.”

While Jarman’s work sometimes references images suggested in the songs themselves, one might also argue that his film was basically created with a narrative logic that is not beholden to the lyrics. In general, Jarman is far less sexually explicit in this music video than he is in his own films, particularly given his images in Sebastiane of a decade earlier and Carvaggio of the same year. In the music video there is little nudity, and the intensity of the male on male gaze is kept to a minimum. Indeed in the first song, the director almost reaches back to the 60s and 70s hippie world to encapsulate the new world of freedom experienced upon the occasion of the Queen’s metaphorical death. Young children transmogrify into childish-like adults, one dressed in a stripped shirt and short black pants who trips around a vacant industrial lot spray-painting the song’s title upon concrete walls. Young girls in dresses are a moment later transformed in what appears to be a young man in a long gown, suggesting the song’s lyrics about Prince Charles’ secret desires:

I said Charles, don't you ever crave

To appear on the front of the Daily Mail

Dressed in your Mother's bridal veil?

And so, I checked all the registered historical facts

And I was shocked into shame to discover

How I'm the eighteenth pale descendant

Of some old queen or other 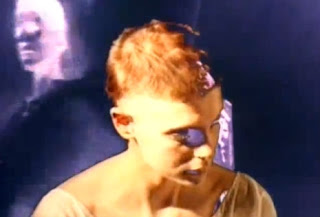 The dancing boy in dress at one point drops the top of his bodice to reveal a woman’s breasts, suggesting that perhaps what has appeared to be a boy is actually a woman with hair closely cropped. But later, the image again appears to be a boy with a fairy flitting about it.

Throughout this section—and indeed throughout the entire video—the royal crown spins about the young apparently cross dressing figure who embraces roses, a sunflower, and what appears to be a nettle, perhaps hinting at Johnny Marr’s song “The Boy with the Thorn in His Side” not represented in the video.

To the strains of  music that suggests “We can go for a walk where it's quiet and dry /  And talk about precious things / But when you're tied to your Mother's apron / No-one talks about castration” the boy-girl begins to spin and by song’s end the young transsexual figure is rotated almost into a wild Turkish dervish, a flame lit where once was his/her face.

My favorite song of the video (and one of my two favorites of the record as a whole) is the true centerpiece of Jarman’s tribute “There Is a Light...” To me this narrative song, about a young man in the car who is clearly enjoying the trip to someplace “Where there's music and there's people / And they're young and alive,” with another, perhaps slightly older boy at the wheel, represents all the wonderment and confusion of a first date. The song reminds me a bit of Luther Vandross song sung by Teddy Pendergrass two years earlier in Alan Randolph’s film Choose Me, “You’re My Choice Tonight,” the five syllabic phrases, “Take me out tonight,” and “You’re my choice tonight,” that ends in a molossus (three equally stressed metrical syllables) in each case assertively pleading the other provide him with pleasure.

But in this case the narrative goes far deeper. The boy at the center of the song is also seeking an escape from home:

Driving in your car, oh, please don't drop me home

Because it's not my home, it's their home

This young man clearly has been kicked out of his own home, which suggests to me that it has something to do with his sexuality as expressed in the rest of the work. The young man with who whom he’s riding is obviously someone with whom he’s in love but is too shy to express that fact:

And in the darkened underpass

I thought "Oh God, my chance has come at last"

But then a strange fear gripped me and I just couldn't ask [.]

So delighted is the presumably younger man that he ridiculously imagines that even if a double-decker bus of “a ten-tonne truck” [sic] crashed into them, he’d be happy to die: “To die by your side, well, the pleasure, the privilege is mine.”

I read this work, in short, as a coming out story, about a young man forced out of his own home by his parents because of his sexuality being taken out on a wild night by the boy he clearly adores.

Apparently, Jarman reads it similarly since he represents a handsome young man who eventually appears shirtless before finally being kissed by another boy hovering over him. The short sequences of this portion of the work are presented almost as in the thousands of young gay coming of age films that by the next couple of decades had become so popular that currently they dominate LGBTQ filmmaking. 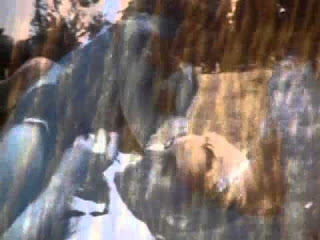 Here too, as in the previous work we see flames, but in this case instead of representing the end of the old regime they signify the possibility of being killed by the crash. And in a sense the young man, demanding to move forward without a return, can only imagine that he might be consumed in his young love for the driver, the male in charge. Jarman reveals the truth of this song: that it speaks not only of love but of a desperate search for a replacement of the familial love he has lost. Death would be better than going back as long as he was in the arms of the driver of the vehicle taking him to a new destination.

As the two again kiss, the surface becomes scratched over by what eventually appears to be gains of wheat—for an instant Jarman almost seems willing to romanticize their love into a Hallmark card image—the golden stalks appearing to embody the hair of the blonde boy being kissed, and finally blotting out the faces of the two lovers as Jarman’s frame resolves into an abstraction that if one focuses long and deeply enough ephemerally reveals a series of lithe nude dancers.

The third song, “Panic” begins, in Jarman’s vision, with an image of a cool handsome young man in a leather jacket who slightly resembles a British version of James Dean who seems to stand against and apart from everything that the lyrics are announcing:

Panic on the streets of London

Panic on the streets of Birmingham

I wonder to myself...

Could life ever be sane again?

The Leeds side-streets that you slip down

I wonder to myself...

Hopes may rise on the Grasmere

But, Honey Pie, you're not safe here

So you run down to the safety of the town

But there's panic on the streets of Carlisle

While the figure smokes and stares off into the bay, we also get glimpses of derelict streets, graffiti-laden walls, alleys filled with garbage, and buildings that appear to have been shot-up by bullets. Is the young man a product of these war-torn streets? 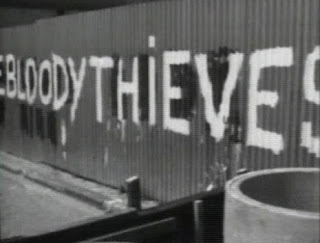 Yet, despite his seeming bemused attitude, a war even against the music itself is brewing as the lyrics invoke that the discos be burned down since the music that they play has nothing to do with the narrator’s life, ending, of course, with the now famed final invocation that they should

By video’s end the young man seems to almost be kissing a smoking skull, an expression of the necrophiliac relationship the man has had, apparently, to that DJ or the music itself. 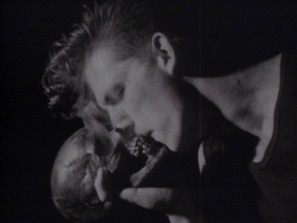 In 2019, writing on the internet site Far Out Kelly Rankin nicely summarized Jarman’s contributions to the art of musical videos and to the work, in particular, of Morrissey, Marr, Andy Rourke, and Mike Joyce.

“Jarman’s fragmented style perfectly suits the cult-classic band The Smiths. All of the footage was shot on film; the Super 8 was notoriously Jarman’s favourite companion. There are multiple accounts talking about his early days and how he would never leave the house without it. You can tell from the first second; there’s an abundance of hand-held camera action of urban scenery. Followed by shots of punk behaviour, alarming figures and costumes, highly contrasted shots of Buckingham Palace, other places around London, the crown—and of course the Queen herself—all giving a nice salute to Morrissey’s anarchistic lyrics. Layers of film overlap, these shots cross over each other… you might not always be sure of what you’re looking at exactly, but you are definitely intrigued. You want to know why he chose each detail and what everything represents.

All of this has happened in just the first five minutes. It’s a piece of visual art, not just a music video. Although each song and section of imagery is completely different, there are still clear themes that run throughout the thirteen-minute film. Shots of flowers, fire and angels; an eighties take on romanticism. It’s thirteen minutes of a decaying Britain, with flashes of beauty and queerness. If you love The Smiths, Derek Jarman, eighties Britain...you should give it a watch.”

It would have been interesting to see how Jarman might have approached another song on the 1986 album, “The Vicar in a Tutu”:

I was minding my business

Lifting some lead off

The roof of the Holy Name church

It was worthwhile living a laughable life

To set my eyes on the blistering sight

Of a Vicar in a tutu

He just wants to live his life this way

A scanty bit of a thing

With a decorative ring

That wouldn't cover the head of a goose

As Rose collects the money in a canister

Who comes sliding down the bannister?

A vicar in a tutu

He just wants to live his life this way [.]

But perhaps that would simply be too literal for Jarman’s more subtle talents. Yet I’d love to have seen the vicar slide down that bannister.

Posted by greenintegerblog at 7:19 AM