I say this with a sense of humor, realizing its absurd stereotypical assertions, but sometimes it does seem to me that Norwegian theater and screen writers have a habit of making a great deal out of nothing while making little out of highly significant events. A long stare out a window might seem to signify something of immense metaphysical significance while a roaring inferno of a fire in the orphanage might be dismissed as a casual misuse of a match. The latter is, of course, out of Ibsen, and the fire is of some importance since Mrs. Alving did not insure the building dedicated to the memory of her late husband; but since she finally comes to realize just how much she hated her husband and the disaster he has brought upon her son, she’s not really so very upset by the new building’s destruction. The long stare occurs in nearly every Norwegian play and movie I have ever witnessed, spilling over to the neighboring Swedish films of Ingmar Bergman and others.

There is also a long stare out of the window of the apartment building in which Peder lives and  into which the new tenant Stian has just moved, that window observation saying a great deal about both boys who—after the pretense of their first meeting when Stian (Stian Barsnes Simonsen) visits Peder (Kristian Dale Hakkelberg) to borrow a pair of pliers to work on his bicycle—are fascinated with one another at first sight.

So too is Peder’s “sort of” girlfriend Cecile (Silie Andresen) who the first moment she spots Stian speeding past them through the snowy sidewalk on his bike declares him as her “type.” Upon her very next encounter with him she thinks he’s good-looking (to which Peder agrees) and a second latter declares that she’s in love. 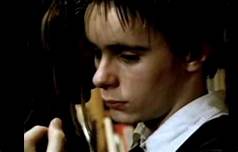 By the very next scene we see Stian dancing with Cecile, while Peder sits in the room were his previous friends seem to having a enjoyable time, staring away into space, not appearing to care for their company and refusing, when asked by another girl, to dance. He suddenly seems like the new boy, while Stian was become an insider.

When Stian later queries about his relationship with Cecile, whether or not she is his girlfriend, he answers “sort of,” yet explains that they are not really dating. But when Stian invites him to join him and some friends for dinner at a local hang-out, Peder states he has to help his mother.

In short, the handsome new boy has almost appeared to usurp Peder’s role in his own social community—although by this time already, only about 7 minutes into a short 21-minute film, the camera has made it quite clear through the covert glances of both boys that they are attracted to one another. Perhaps what the dialogue by Tor Fretheim is telling us, as opposed to Frank Mosvold’s direction, is that the boys do not yet quite know where they stand, not only in relationship to one another, but concerning sexuality in general.

In any coming-of-age American or British film the Peder figure would have already been discussing his confusion with his best friend, Cecile, who might have helped him realize that he was gay and argued that he more openly express his feelings; 4-5 minutes later they might have been in each other’s arms (I present as evidence my often-sited “coming-of-age” movie models, Get Real and Edge of Seventeen, both released less than one year after this short). In this version of that genre, however, his girlfriend is his competitor—or at least she thinks she is, even if Stian’s long sidelong gaze at Peder during his dance reveals something else.

The only time the now brooding Peder seems to come out of his funk is when, joining both Cecile and Stian in a winter walk they begin to make snow angels in a nearby park, the boys briefly wrestling before Stian bends down to suddenly plant a kiss upon Peder’s pretty mouth.

Peder quickly finds an excuse to head back home, and Cecile asks Stian why he has done that, he answering in the simplest way possible, with a slight giggle in his voice, “I don’t know.” It is almost as if it didn’t really happen.

But, obviously, we know it is the central event in this film whose title makes note of that fact. In kissing Peter, Stian has officially come out—at least to himself, later admitting his love for Peder. Yet here, as in so many Nordic films, guilt immediately takes hold of his mind—not from a religious belief for behaving in an “unnatural” manner, but from a sense of social responsibility, having intruded upon Cecile’s previous camaraderie with Peder. Indeed, Stian later appears at Peder’s apartment to seek out his forgiveness, stating that he must also apologize to Cecile as well. 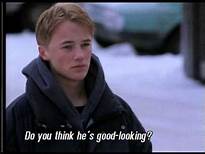 As the cliché goes, these two boys have simply met at the wrong time in their lives, for Stian soon after reports that he will be moving to Bergen to live with his father, a city on the other coast of Norway which to people on eastern Oslo side of the country seems as far away as Iceland.

It is only at that moment that is friends seem to provide some possible sense of resistance to the natural course of events, Cecile asking why he can’t make his own decision about where he lives since at 16 he of legal age, Peder questioning him about how it might effect his schooling.

Stian’s admission of love comes, too late of course, in the form of a letter:

I hope you are not mad at me for not writing sooner. I have tried many

times. I hope you are with Cecile. That all is like before you met me. I

didn’t mean to take her from you. I just wanted her as a friend so that I

could be with you. You have probably forgotten about making angels in

the snow. Your angel came out so nice. I just had to kiss you. You may

not believe in miracles, but that kiss made the snow melt. I wish you

could have seen the rainbow I saw. Please don’t get angry with me or

think bad thoughts. That’s when I realized I was in love with you.

Finally perhaps Peder can also see the rainbow. At least in the film’s final scene the sun has come out.