Describing the “plot” of a Lenny Bruce routine is a little bit like lecturing on jazz or rapping about architecture. It can be done: Nathaniel Mackey has written several fictions about jazz that fully convey the syncopations and rhythms of the music, and I suppose a hip hop artist might be able to take on the Empire State. But every time I’ve heard a different recording of Bruce’s famed “Thank You Masked Man” routine it’s somewhat different from the last, things left out, new elements represented, the comic emphases located in different parts of the “story.” And all the oral versions of the skit that I’ve heard, now some four or five various recordings, are different, sometimes substantially, from the 1971 Jeff Hale animated short film featuring yet another version of the work. In fact—and this is important—the routine generally titled in the recordings as “Thank You Masked Man” is called “Thank You Mask Man” in the cartoon film animation.

A masked man is simply one of many of a kind, another male wearing a mask, while a “mask man” is a very particular individual, a man who himself represents the mask, a singular being who has come to defined not only by his costume but what that element of apparel represents. The Lone Ranger of the film is not only wearing the mask but has become the mask, the “mask man.”

In short, the horse rider who rushes in to help his fellow citizens in peril is, in the animated version, not only alone, a man who ranges about the landscape as a loner, but is someone basically unknown to the society which he repeatedly helps and saves. He is an outsider, defined by his being apart from the people he regularly rushes in to protect.

For that protection it is quite understandable why societal figures, the town leaders, their wives, their children, and even the local streetcleaners wish to thank him. After all, he protects them and helps them to maintain the society which they define. And surely we cannot wonder why they  might wish to award him for his maintenance, his salvation of the normalcy for which they stand. The sheriffs and mayors who are grateful for his help would love to give him medals, it would give their wives great pleasure if he’d stay around just long enough to eat a slice of they freshly baked cakes. Their kids would enjoy personally thanking their parents’ hero. “Thank you mask man. Thank mask man,” would appear to be a lovely thing to come out of the mouths of these babes. 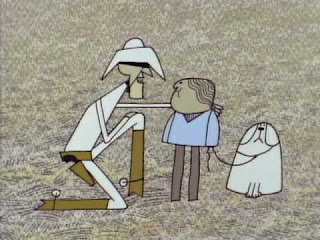 But no, the mask man runs in to save the day only to escape before having any substantial contact with the citizens he protects. And frankly those perfect respectable and bourgeois folk are getting a little bit irritated with his highhandedness, with his clearly standoffish behavior.

One citizen suggests that the mask man is in analysis, having discovered that he can’t accept love. A small town medical doctor even diagnoses part of the problem can is evidenced in the fact that he uses only silver bullets which, he argues, symbolizes Dr. Paul Erhlich’s struggle to discover the silver bullet—arsphenamine (compound 606)—that will cure syphilis. “He sees all of us, the entire society,” so speculates the good doctor, “as being infected with syphilis.” Not at all an appropriate way for their hero to characterize those whose difficulties he cures. Maybe he’s not such hero, after all, the town leaders suspect. 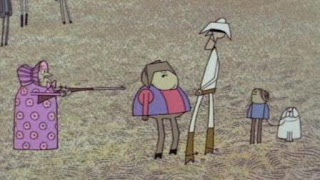 Finally facing by the gun—in Hale’s comic version both figuratively and literally—held by the local sanitation worker, they demand to know why he doesn’t hang around to accept their appreciation. The mask man attempts to explain that if he stayed around to hear a young boy say “Thank you mask man. Thank you mask man,” he might get used to it and even enjoy the praise heaped upon him. He’d possibly like it so much that he’d stay at home with the other societal folks and wait for each day’s delivery of his fan mail. And then one day, when he didn’t find a single fan letter in his mailbox, someone might tell him that the Messiah had returned and made everything right again, and he’d find himself without a job, without even his identity. He’d have to go out and cause trouble, create a ruckus just so he might be required to come to the rescue. He’d have turned a good thing inside out, the savior transforming himself into the villain of the story. So that’s why, he concludes he can’t stay around for the praise. “What I don’t have, I don’t miss.”

Still, just this one time, they insist, he take with him, just as a gesture or for their kid’s sake, anything he wants. The mask man looks around and dismisses the ash tray. He looks around again, ponders, and then, comes up with a brilliant idea, “Give me that Indian over there!” Who? Tonto? Yes, shouts the mask man, Tante. Give me Tante. It’s Tonto says the surprised street cleaner, not Tante (which in Yiddish means “aunt.”*) And what do you want him for?

The mask man: (straightening up the feather atop Tonto’s head) To perform an unnatural act.

The street cleaner: What??

The mask man: To perform an unnatural act.

The cleaner: O, the mask man’s a fag. Awwww. [sticking out his tongue] The fag man. A dirty fag. You damn queer you! The mask fag man, ain’t that a kick in the ass? [to the mask man] I bet you got mascarry under that damn mask ain’t you? A damn queer. I never knew you were a fag mask man.

The mask man: I’m not a fag. [pause] But I’ve heard a lot about it and I’ve read exposés and I want to try to see how bad it is. Just once. I like what they do with fags anyway (wrapping his arm around Tonto’s shoulder). The punishment is quite correct. They throw them in jail with a lot of men, very clever (he laughs with a slight giggle).

“Wash him up and get him ready,” he commands as he now strides forward in a walk that might almost be described as hip-heavy strut. Spotting a pink horse with a fluffy white mane and tail, the mask man pauses: “Hey, give me the horse too.”

The cleaner: What do you want that horse for?

The street cleaner sticks out is tongue again in disgust and almost immediately the whole town is howling out “Fag, fag, fag, fag, fag, fag, fag as the Lone Ranger, no longer alone rides off into the sunset shouting heigh-ho, proving to the whole of society that he remains a true outsider worthy of his name, a mask man willing to experiment, at least twice, in sex. And we must remember Tonto remained loyal to him to the very end.

You have to imagine the story I’ve just shared with you, however, being performed not by a pop intellect but a brilliant verbal storyteller who uses the syncopations and rhythms of music along with the riffs of a hip-hop artist to build up a satirical high rise whose structure, like the tower of Babel, comes tumbling down with the awe of a chorus of laughter.

For those in the LGBTQ community who were offended by the use of the word “fag,” I might suggest they go back and carefully study the structure of Bruce’s linguistic construct. It is the society, as it has been through the ages, who calls this wise loner by names, not the comedian who tells the tale.

And what a brilliant fable it is, demonstrating as it does, just how hypocritical these desperate folk so desirous to embrace their savior into their fold are. It is, as Jacques Derrida might have put it, la différence that makes it possible for the mask man—maybe even with mascara applied to his eyes—to save them. For it has always been the outsiders who have shown those inside how to survive.

I’d like to have seen Bruce riff on Batman and his boy Robin as well.

I should just mention that in his skit “blah-blah-blah” Bruce also draws attention to the LGBTQ community. Arrested in San Francisco for obscenity, using a word that he describes as a common homosexual practice of ten letters, the comedian forces his audience to deal with homosexuality much in the way that Tim Miller does in some of his performances. Miller often opens his show appearing naked and sitting on an unsuspecting audience member’s lap, forcing them, in some cases for the first time in their lives, to actually make bodily contact with a homosexual man.

Similarly, Bruce turns an adjective through the telling of the story of his arrest and his appearance in court where the policeman, the judge, the lawyer, and several others repeating it over and over—Bruce coding it as “blah-blah-blah” in his  recounting of these events precipitated by his calling someone, apparently, a “fucking ass”—into a verb. An unlikable person suddenly is transformed into a sexual act which requires Bruce’s audience, each time he repeats the words “blah-blah-blah,” to imagine, for many of them, the unimaginable. It’s sheer genius.

*In one version of the recordings (“Thank You Masked Man” of 1972) The Lone Ranger is described as being Jewish, and speaks in Yiddish, yet another version of the outsider.

Posted by greenintegerblog at 2:51 PM