without even a kiss

Ron Cowen and Daniel Lipman (Teleplay, based on a story by Sherman Yellen), John Erman (director) An Early Frost / 1985

1985 was an important year for the LGBTQ community in connection to the recognition of  the AIDS crisis. That was the year, if you recall, that Rock Hudson died of the disease, not only shocking many everyday Americans with the revelation that Hudson was a gay man, but that anyone might contract and die from the acquired immune deficiency syndrome, including Hollywood’s hunkiest leading male actor.

What is usually described as the first major AIDS film, Arthur J. Bressan’s Buddies premiered late that year, as well as the first TV drama that dealt with the subject, John Erman’s An Early Frost which reached more than 34 million people when it was broadcast on November 11, a month after Hudson’s death.

The film, written by Ron Cowen and Daniel Lipman (who later created Queer as Folk), took over two years in development with 14 rewrites. And, alas, the film reveals many of its numerous committee-like decisions.

Unlike Buddies, which featured a more radicalized and almost indigent victim of the disease, Erman’s work was pitched almost entirely to the bourgeois and upper-middle-class aspirants, similar to the figures in the next year’s excellent Parting Glances, 1989’s Longtime Companion and Philadelphia of 1993. As Erman himself admits, his audience as he saw it was his working-class Aunt Myrtle, “so that she will realize that gay people are just as good as anybody else.”

As in Philadelphia, An Early Frost’s poster boy for AIDS Michael Pierson (Aidan Quinn) is a handsome well-to-do lawyer with a basically loving upper middle-class family—Nick (Ben Gazzara) and Katherine (Gena Rowlands), sister Susan (Sydney Walsh), and a grandmother played by the wonderful Sylvia Sidney—who lives in a basically monogamous relationship with an equally handsome lover Peter Hilton (D. W. Moffett) in a spectacular Chicago apartment that today would certainly be worth millions. The Pierson family home was represented by a house in the Brentwood area of Los Angeles, a real-estate agent’s dream.

At large, this strategy is understandable. If people like Hudson and the handsome character Quinn plays can contract AIDS, then anyone might. And, put together, what all the films I mention above make clear is that people of wealth were just as subject to the pernicious disease as others. And you have to give the director credit for his casting choices given the original desires by NBC executives who envisioned Michael’s family members to include, as Jay Blotcher reported in The Advocate, “Elizabeth Taylor or Audrey Hepburn as the mother, Gregory Peck as the father, and Helen Hayes as the grandmother.” The nervous network nellies, one suspects, might even have imagined Norman Rockwell as the set designer. So the Leave It to Beaver-like Brentwood house is not as absurd, in hindsight, as it might first have appeared. 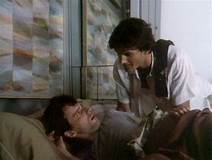 At the time of this TV film’s shooting, although a Gallup poll showed that 95% of the US population knew what AIDS was, the majority still perceived it as a gay disease. Accordingly, although it focused on a gay man and his family, Erman clear saw his film clearly as an educational tool, and accordingly took its character, who had remained closeted regarding his family and was evidently for too much of a workaholic to have kept up with information that the gay community itself had long before perceived, that although it the US and Europe it had first stricken predominantly gays, in Africa and some Asian countries it was a heterosexual disease as well, and in the US it had hit hemophiliacs, drug addicts, others who had had blood transfusions and was rapidly beginning to enter the lives of heterosexual men and women and even their children.

In an attempt to maintain authenticity Erman had Quinn undergo an AIDS test which Blotcher describes: “The doctor noted that the actor’s lymph glands were swollen and his white blood cells elevated.” Quinn remembers, “And I thought, Jesus Christ! Do I have AIDS? Is this some bizarre trick of fate that here I am doing this groundbreaking thing and I actually have it myself? The actor lived through a couple of days of mental agony—'I was kind of freaking out’—before his HIV antibody test came back negative.” 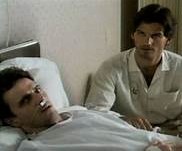 When Quinn’s character, Michael finds himself hospitalized after a coughing-jag at his office,  the doctor diagnosing AIDS, he undergoes the whole gambit of reactions that those who find themselves afflicted generally exhibit: confusion, denial, rejection of any relationship to others who have come down with AIDS, anger, accusation, and refusal to accept the inevitable result of the disease which in that period represented almost certain death. In this instance when Michael discovers that Peter has had outside sex a couple of times when a law case took him out of town for a long period, and accordingly, that he may have contracted AIDS from his lover, he insists the one most able and willing to care for him leave.

The network standards and practices committee were insistent that Peter be presented as the villain of the piece in their attempt to portray homosexuality in a negative manner. Erman rejected their demands, threatening to reveal their tactics to the media, and they backed down. They continued to insist, however, that there be no physical contact between the two gay characters—ridiculous when one perceives that one of the lessons of the film was that AIDS was primarily contracted through physical sexual contact. On television they weren’t even granted a kiss.

After Peter accuses Michael of still not having come to terms with his own life, Michael flees back to his family, faced finally with not only telling them that he is gay and that his next-door friend is his at-home lover but that he is ill with AIDS. 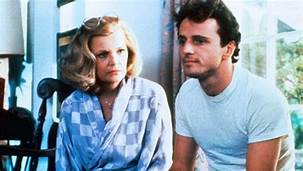 Michael’s father, a lumberyard executive, cannot believe the truth, like so many fathers facing even less dire reports, absolutely rejecting his son. Fortunately, the mother is played by Rowlands who has spent her life creating a treasure-chest of feisty lovers and mothers, and takes on the role of Katherine Pierson, a woman who refuses to abandon her son in his time of most need, with  relish. In fact, as the movie goes forward it becomes increasingly difficult to comprehend why such a caring and outgoing woman could have lived most of her life with such a gruff and grumpy being as her husband Nick. Although she continues to beg Michael not to give up on his father, we gradually begin to comprehend why the son has not ever been able to “come out” previously to his father, and we begin to wonder whether her husband will be able to live up to her assertions.

In many senses this work is so overstuffed with all the possible familial and societal dilemmas and roadblocks that sufferers of AIDS might face that we lose sight of Quinn’s character. He becomes instead a kind of modern-day Job, a symbol of what it means to suddenly be faced at a young age with one’s own death living among a still basically homophobic and terrified populace.

When Michael suddenly undergoes severe uncontrollable tremors an ambulance is called only to be told by the drivers, upon discovering that their patient is sick with AIDS, that they refuse to transfer to the hospital. His father must carry his own son down the stairs and drive him to the institution by himself.

Michael’s own sister, with whom he has long been close, refuses to visit the house; she is pregnant and fearful, despite assurances, that she might catch the disease simply from being in the same room with him. Michael’s father, still unable to come to terms with the son he loved but apparently never truly knew, refuses to visit him throughout his hospital stay.

Peter finally visits the family, he and Michael returning to some sort of normalcy, and Katherine realizes what a perfect choice her son has made in his companion. But he is made to feel unwelcome by Nick and the other tensions surrounding Michael and his relationship, and returns to Chicago to await Michael’s own return.

Yet for all of the stuffgeschicte that the creators felt necessary to portray the struggle gay AIDS patients had to face, one cannot help but be moved by An Early Frost and be thankful for its existence. As Erman, himself a gay man, was working on his film his cinematographer, Woody Omens, was concerned that every time he looked over at his colleague he saw him in tears. I dare anyone with a shred of empathy to watch this film without them.

There are some scenes, moreover, that simply stand out in their stark surreality. Encouraged to attend a therapy session in the hospital with other dying AIDS patients, Michael is horrified with their conversation, particularly by the gallows humor of the most flamboyantly gay of them, Victor Mitado, played brilliantly by the always entertaining gay actor John Glover. Immediately identifying Michael’s condition, Victor admits, “I’ve had everything. I’m a medical marvel.”

When another member of the group, a black man, tells them that he was fired for having AIDS and lost his health benefits, his boss having had his office disinfected, Victor snaps back: “Lemon-scented or pine?”  When the conversation turns to the straight man among them who reports that when his wife left she hugged him, but turned away her face, another responds that at least he had someone to hug, expressing his sadness with the fact that he will never be hugged or kissed again. Victor interrupts, “Well no one’s asked me. I’m available!”

Finally when the others become aware that one of their group is missing, the discussion leader reports that he has died. One young man, Todd, his face covered with tumors, begins to cry. “You know I’m getting tired of making friends who keep dying.” Victor once again turns the sorrow into levity. “I know what you mean. It’s almost impossible to put together a dinner party these days.” But when the same young man suggests they all should just...”end it,” Victor is the only one who reaches out and puts his hand lovingly on his shoulder, pulls him toward him and hugs him close,” asking him to openly relieve his grief.

Michael gets up and leaves, unable to deal with the only way these people have learned to survive their ordeal. “I don’t belong here,” he claims.

Yet later he becomes close friends with Victor, awarding him his own bathrobe which Victor has admired and serving as his “lawyer” as his new friend makes out his last will and testament. Unfortunately, Victor does not complete it before his death, Michael discovering a cleaning man in his room, throwing all his possessions, including the robe, into the trash before disinfecting the place.

And, when at the lowest point of his own suffering our reluctant hero determines to commit suicide by automotive asphyxiation from which he is saved by his still someone begrudging father, we realize that before the curtain falls the elder will be forced to recognize that his son has been more of man in openly facing his life choices and death than he himself has ever been. 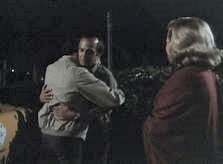 Eventually, Michael determines to return to Peter and live out whatever time he has left with the man he has chosen as his “lifetime companion.” even if that lifetime must now be condensed into only a  year or a few months. As Nick and Katherine wave goodbye this time to their son, they know that it may be forever, but surely, offscreen at least, he will be awarded by Paul with many a kiss.