having to do what you have to do

The 1932 pre-Hays Code film Call Her Savage is perhaps best known today for its late-in-the-movie scene in a New York Greenwich Village restaurant were the denizens are entertained by two gay performers as they dance to racy lyrics. Arguably, it was one of the first appearances in US filmmaking of self-identifying homosexuals without any pretense of a drag comedic performance or a coded sequence of under-the-radar sexuality. Perhaps only Ralph Cedar’s western spoof The Soilers of 1923 or James Whale’s The Old Dark House of the same year so openly expressed LGBTQ figures.

Yet, John Francis Dillon’s film, based on a novel by Tiffany Thayer, had numerous other ground-breaking themes and several more coded references to queer sexuality laced through its almost epic recounting of a doomed family, cursed by an old settler after a wagon train Indian attack “brought on,” in his imagination, by the sexual philandering of one of its leaders, Mort, who had left his wife to drive the lead wagon in order to have sex with a woman in a wagon further back. Eventually Mort becomes a wealthy Texan. 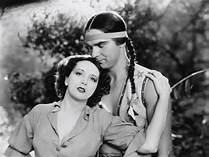 His daughter Ruth grows up to marry another boy from that same covered wagon trek, Pete Springer (Willard Robertson), who himself has become a successful businessman often leaving his wife alone as he travels throughout the Southwest on business trips. During one of his absences, the young Ruth, in love with a local Indian named Ronasa (Weldon Heyburn), becomes pregnant with his child, Nasa (Clara Bow), who is the heroine of our story. 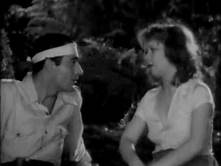 Nasa, as the old man in the wagon train (Russell Simpson) had predicted, also grew up wild, presumably—so posits Edwin J. Burke’s racist screenplay—because of her “savage” blood. So mercurial in temperament is Nasa that at one moment, after have been almost bitten by a rattlesnake, she whips her lover, the “half-breed” Moonglow (Gilbert Roland) before, a moment later, she tries to nurse him back to health, tearing away part of her own blouse to serve as a tourniquet. As she explains human nature, in part justifying her own behavior:

Nobody is good or bad. People just do things they’ve got to do

that’s all. Something inside makes them. Nobody ever likes

If there ever was an early attempt to describe non-normative behavior, both in terms of daily personal encounters and sexual desires, Nasa’s philosophy represents Hollywood’s declaration. And soon after, when she is sent away by her pious father to be straightened out in a Chicago School for Women, she proves her theory of uncontrollable vacillations of behavior by acquiring the Windy City’s journalistic moniker of “Dynamite.” As a social newspaper commentator observes in announcing her societal coming-out party: it’s hard to determine whether this is be described as a society event or as police car news.

At the party her father is determined to announce his daughter’s marriage to the heir to another fortune, Charlie Muffet, a man she cannot abide, and to whom she later announces—when he insists that he wants to marry her—that “making arrangements for a nervous breakdown.”

To gum up the works, Nasa invites a local lothario to her party, Lawrence Crosby (Monroe Owsley), who describes the attempt to marry her off to Muffet as “trying to hitch up Niagara Falls to a squirt gun.”

Crosby, whose father owns a couple of banks, is in the midst of breaking up with current lover, the equally wild woman Sunny De Lane (Thelma Todd). Packing up, Crosby’s butler holds up a woman’s slip to ask “Will you take this with you Mr. Crosby?” to which his employer quips, “Do you know the difference between a woman’s dress and a gentleman’s trousers?” No answer is given.

But when a few moments later Sunny De Lane argues that Crosby will surely eventually come back to her because, “I understand your little peculiarities,” we can only suspect that woman are not the only basis for his admission that, “I wonder if there’s any sin in the calendar I haven’t been guilty of.” When the woman to who he says this ponders how he finds time to do anything else in his life, he quips: “I lump them all together and commit five or six of them all at once,” which leaves almost any many of combination of sinful acts to our astounded imaginations. 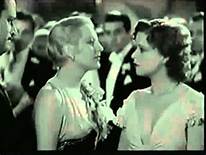 His ex, Sunny, is also determined to attend Nasa’s party, declaring that she’s not afraid of “dynamite,” and before the evening comes to an end the two girls have not only made a public spectacle of themselves in a good old women’s wrestling match, but Nasa finds herself married to the already gone missing Crosby. On their wedding night he returns home drunk at 2:00 to, after a 5:00 telephone message, get dressed again and return to whatever party he’s previously left.

Realizing that her marriage to Crosby was an act of spite against Sunny, Nasa determines to make the best of it by going on a shopping spree that any stylish beauty might envy. But eventually that comes to a stop, not because as Crosby’s lawyer argues, her husband has cut off her expense account, but because he is now dying in a New Orleans hospital and begs to see her before he goes.

Reluctantly, Nasa makes the trip to find a much weaker man in the hospital bed, but still not frail enough to prevent him from attempting to rape her—although oddly enough he seems more interested in her diamond bracelet than in her body, wrapping it around his fingers as he declares  “I haven’t had any jewels in my hands for months.” When he does get back to admiring his wife’s looks, she bonks him over the head, the doctors finally rushing in, one of them later quietly telling her that her “the disease has affected his mind.” 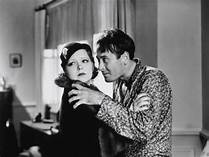 Obviously, we might interpret such a disease to have something to do with alcoholism, but I’d argue the script is more clearly winking at that pre-Aids scourge to both sexually active hetero-and-homosexual lovers, syphilis. Certainly, Nasa is suddenly worried, not necessarily about her philandering husband’s deteriorating health, but for the well-being of her soon-to-be born baby. She must have been impregnated the first afternoon of their sham marriage.

The baby, nevertheless, is born healthy—although in a story about the damned children of several generations (the old coot from wagon train quoted from the book of Numbers from the Bible: “The LORD is longsuffering, and of great mercy, forgiving iniquity and transgression, and by no means clearing the guilty, visiting the iniquity of the fathers upon the children unto the third and fourth generation.”) it may be possible that her son, like Oswald Alving in Henrik Ibsen’s Ghosts, might still one day go blind. But Nasa doesn’t give the poor kid a chance. Without money, she determines to briefly work the streets in order to raise enough money to pay for her son’s medicine, and, leaving her newborn alone in the care of a young neighbor girl, returns to discover that her child has died in a rooming-house fire. But there’s good news along with the bad: her grandfather Mort has died and left her his substantial fortune.

Now determined more than ever to get even with society, Nasa relocates to New York, hiring a male escort to show her the sights before she digs in for revenge. He takes her to various night clubs and even shares a view the city from the top of the Rockefeller Center Tower, which at the time of this film was still under construction, this clip perhaps being one of the first on-screen portrayals of the Art-Deco wonder.

Her escort, Jay Randall (Anthony Jowitt) is yet another wealthy young, dapper, but somewhat effete man, pretending in this case to be an obedient employee just to get closer to the woman which has caught his eye, much like the jewels that Crosby so enjoyed holding.

When Nasa requests, one night, that they go slumming, he takes her to that now infamous Village restaurant—sure to be filled, as he warns her, with wild poets and anarchists—where the two gay performers with which I began my essay, dressed as cleaning maids replete with feather dusters they flap in the faces of their admiring diners, sing a song something like this: 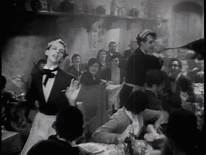 “If a fairy in pajamas I should see, I know he’d scare the life out

of me. [The second responding] And on a great be big battle- 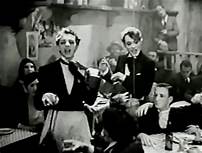 It’s interesting that Nasa’s escort knows all about this place, and when the couple enter appears to be widely recognized by the crowd. There is, in fact, an anarchist in the crowd who recognizes Randall to be the son of the mining mogul, Silas Jennings, resulting in a male and female kerfuffle—the likes of which the Hollywood screen would not again see until Marlon Brando flew down the missionary doll played by Jean Simmons to dinner in a Cuban bistro in Guys and Dolls. For Nasa it’s so invigorating that she immediately accepts the proper polo player’s offer to marry.

The father, as moguls are want to do, thoroughly disapproves of  Mrs. Crosby’s  intentions regarding his son, and invites the couple along with the surprise guests of Mrs. Crosby and Sunny De Lane to dinner just to test Nasa’s mettle. Evidently the now-cured Crosby (Dr. Erlich had found his “magic bullet” in 1910) has returned, perhaps for his “peculiarities” to his former mistress.

From the long camera pan of the dinner table after the affair and the shiner in Sunny’s eye, we perceive that Nasa has once more failed the test. Even the prudish Randall is shocked by her savageness. 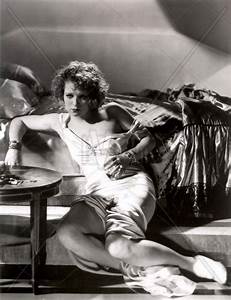 With the wedding called off and near total rejection by anyone of social importance, Nasa falls into a self-pitying drunken state, daring not even face herself in the mirror. A telegram reports that her mother, back in Texas, is near death.

Sobering up, Nasa returns home to her mother’s deathbed, where, in her last breath, Ruth whispers the name of Ronasa. When Nasa’s old friend Moonglow tells her that Ronasa was a great Indian chief who fell in love with a beautiful white woman and committed suicide, Nasa suddenly answers the dilemma she has long faced concerning her “difference,” perceiving that she too is a savage, a half-breed. Now, finally, she is free to marry her first love, the calm and long-suffering Moonglow, the perfect foil for her “blazing sun”-hot temperament.

It appears that critics such as The New York Times’ Mordaunt Hall didn’t quite know what to make of all Nasa’s transformations and the men spinning round them: “Miss Bow does quite well by the rôle of this fiery-tempered impulsive Nasa, but whether the flow of incidents makes for satisfactory entertainment is a matter of opinion.” Hall seemed more taken by the New York theatrical sites than with the events of the plot, although strangely deleting any mention of the Village bistro, ending his November 1932 review:

“With a charming setting that gradually comes to view after introductory lighting effects and flashes of movement and color, there is on the stage of the Roxy, Maurice Ravel's composition ‘The Birth of the Waltz.’ It is a gratifying rhythmic spectacle, with graceful girls in attractive gowns, and men in uniforms swaying to the melody. The first number of Frank Cambria's footlights diversion is Edelweiss, in which there is a colorful mélange, including dancing, singing and balancing.”

Well, he likes dancing and singing girls and boys at least, even if miscegenation, homosexuality, adultery, suicide, sexually transmitted diseases, and down and dirty female wresting bouts are deemed unworthy of being topics for entertainment. Only two years later, Hall would find in Will Hays someone who utterly agreed.

In 1970’s The Song of the Loon directors Andrew Herbert and Scott Hanson brought many of this film’s major concerns once again to the screen.