Surely one of the oddest short gay films ever made, Michael Burke’s 1998 Fishbelly White might also be described as one of the post poetic and subtle of coming of age films. The young boy at the center of this work, Duncan (Mickey Smith) lives on a farm on which his father raises pigs and chickens. Duncan’s farmyard responsibilities seem mostly to consist of gathering eggs and keeping the chickens from fighting, particularly from hurting the young dirty-white hen (presumably the source of the film’s title) who the more colorfully feathered hens regularly torture through their pecks.

Not only is Duncan a tender soul, who loves all animals and can hardly bear the squeals of a hog his father hauls to the kill, but he is especially attached to his white hen probably because he identifies with her situation in being regularly attacked by the others.

Duncan, like the white bird, somewhat like his chicken has immature features and is shorter than other boys of his age with milky pale skin and red hair. It doesn’t help that he bicycles around the country carrying his white chicken in the in the front basket. As he moves back and forth down country roads older boys or simply his schoolmates who are more mature drive by in in a truck, honking and calling out names. 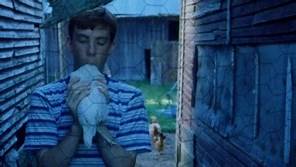 Obviously this kid, beyond puberty but not yet fully aware of his sexuality, is terribly insecure, the fact of which we witness as he attempts to provide security to his chicken by putting its head into his own mouth to calm it down. It is a strange gesture which truly does make his relationship with the chicken, as the boys who pass him call it, “weird.” And surely Duncan feels like an outsider, trying desperately to be friends with those who taunt him, bravely giving a friendly wave as they speed past.

Their taunts have also apparently affected him to the degree that he has come to hate himself, and when he steals away to a dilapidated old farm out-building, he pulls out a cigarette and his lighter and, like youths who cut their arms, applies burns to his stomach.

The only boy in the area who seems willing to be his friend is the handsome neighbor Perry (Jason Hayes) whose family raises cows, animals Duncan also likes as we see him, when visiting the farm, gently petting the cow who greets him at the front gate.

Perry, obviously a popular kid in this rural community, has also taken a shine to the awkward Perry and seems to have a kind of friendly brotherly attitude toward him. He not only kindly talks to him—although when the other boys pass in their truck, he quickly scrambles off the fence where he is sitting with Duncan telling him to do the same—but suggests, in a friendly manner, “You really shouldn’t carry that chicken around. It looks weird.”

He invites Duncan to milk the cow, but living on a farm with only chickens and pigs, Duncan is as much a neophyte to the process as would be a “city slicker,” and to help show him how to manipulate the cow’s udders, Perry puts his hands around Duncan’s in order to manipulate them properly so that the cow releases her milk. The act flusters his friend, who immediately makes an excuse to leave.

In the very next scene we see Duncan fervently singing in the Sunday church service with his family, but as he looks over at the heavily bosomed woman next to him, stops mid-phrase, fascinated it appears with her tits which perhaps reminds him of Perry’s hand upon his together massaging the tits of the bovine. So caught up the memory is the innocent that when the congregation sits for prayer, he remains standing for a few moments. Coming to with the realization that everyone is watching him, he bolts out of the church in embarrassment.

Retreating to Perry’s family farm, he and Perry have the conversation I outlined above, Perry bowing out of the passing boys’ invitation to join them at the swamp (where, we soon discover, they intend to kill frogs by lighting firecrackers under them, a brutal behavior which makes Duncan sick), choosing instead to go swimming with his awkward buddy. Much like the Dennis Quaid character in Peter Yates’ Breaking Away (1979), he quickly strips to his underwear and dives in the river, while Duncan still fully dressed and terrified of the long jump into the river below, remains seated on the railroad trestle above.

When Perry returns he urges his friend to undress and swim, the boy taking off his pants but resisting the jump. The boys take out cigarettes, Duncan lighting Perry’s with his own lighter. When Perry spots the burns on Duncan’s chest, he asks about then, Duncan telling him simply that they’re burns. “You want to feel them?” he asks, almost like Christ permitting Thomas after the crucifixion to put his fingers in risen man’s wounds. Oddly enough Perry obliges, asking whether or not they hurt. “Not much,” Duncan responds. When Perry admires the lighter, Duncan makes him a gift of it. Perry, almost as a gentle reward, pushes the boy off the trestle into the water below. Obviously Duncan is terrified by the fall, but now feels brave in having actually survived the swim.

As a train approaches they retreat to a spot under the train bridge, where as Perry stands in his wet undershorts above him, Duncan gently reaches up and without explanation puts his hand gently on Perry’s well-developed abs, stroking his stomach for a moment before moving briefly to his legs and restoring his exploring hand to the abdomen. 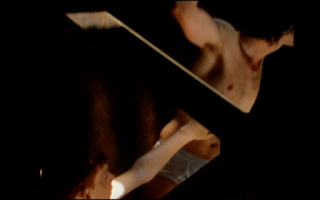 During this remarkably homoerotic moment, Perry says nothing, neither admitting to nor denying what is happening, but simply looking down in total acceptance that the innocent sitting below him has suddenly revealed his budding sexuality to both of them. There is something almost sacred in the moment as Perry without judgment allows the boy to explore what he is seeking, both through his nascent desires and his sudden recognition of why he has so long been put into the position of the outsider. His own hand has spoken what no words might ever have.

Soon after, Duncan tells his chicken that he must leave him at home when he is about to begin his next bicycle outing, but at the last moment he cannot resist restoring his bird to its protective place in the bike basket. Once more the local yokels pass by him, mocking him and calling out “Chicken man,” this time their open flatbed filled with girls and other boys including Perry.

They stop the truck, asking him if he wants to join them. This time he at first rejects their invitation, but they insist, telling him to throw his bike in the back. Perry once more attempts to protect him, arguing with the leader that “he doesn’t have to join us if he doesn’t want.”

Yet Duncan insists he will finally join them, as they grab his bicycle and demand he break the neck of his chicken. The leader taunts him further with words that surely hurt beyond even the self-induced burns he’s suffered: “Perry here thinks you’re a fag. Are you a fag?” I’m not a queer he insists, now ensconced next to Perry in the tuck bed. “Get rid of the chicken” they insist.

Clearly terrified by their taunts but this time more determined and braver than we have previously seen him, he places the chicken’s head, as we saw in the first scene of the film, into his mouth, presumably to calm her fears from all the screaming. But this time his teeth come down upon her neck, breaking it, as he pulls away the body tossing it to the side of the road.

All are shocked as he finally spits the head out of his mouth. One girl screams and pounds on the front cab for the those riding there to let her in. Blood has formed above and under the boy’s lips. Perry pulls out a cigarette and a pack of matches, instead of the lighter Duncan has given him, lighting the butt and passing it on to the person—now not just an awkward friend, but a true geek—who sits next to him. Without even knowing it, all recognize that something important has happened: not only has Duncan been willing to give up the life of his beloved pet to become their friend but he has irrevocably declared his outsiderness to these pitiful representatives of normalcy. He has dared to prove his queerness in return for love.

Posted by greenintegerblog at 11:15 AM