Raoul O'Connell | A Friend of Dorothy

Raoul O’Connell (screenwriter and director) A Friend of Dorothy / 1994

Right off the bat, Raoul O'Connell’s 1994 short A Friend of Dorothy presented me with far too many things I simply couldn’t swallow—and I don’t mean any of the appendages attached to the attractive young boys in this tale. For example, why does a handsome young freshman, Winston (O’Connell in the flesh) who transfers from Podunk State to New York University (he’s obviously seeking something missing in his education) with his “fat” (his father’s words not mine) girlfriend Anne (Anne Zupa) (read “fag hag”), after having the incredible luck to be assigned to a room with one of the most beautiful men on campus Tom (Kevin McClatchy), have absolutely no clue where to find a nice guy with whom he might relieve his obvious sexual tension. He reminds me a little of a 19 year-old me, after having just landed a temporary room on Jane Street in Greenwich Village, asking some boy if there were a lot of gay people in the neighborhood. I should imagine that I wanted to go to bed with the kid and was simply playing a ridiculous innocent to attract his interest. His answer showed up the absurdity of my question: “Like selling coals to Newcastle.” 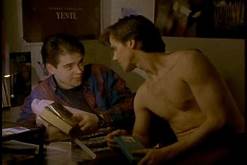 Of course Winston’s got the hots for his roommate, but he can’t quite figure out if Tom’s gay or not (the roomie seems to have a girlfriend, but Winston can’t seem to read between the lines that she’s simply Tom’s version of his Anne), a confusion he maintains despite the fact that whenever the hunk looks his way he flashes the most glorious smile and finds some way to put his hands on the new kid, and even asks one night whether to pay his school debts if it’s an option for him to “hock the family jewels” as he seductively strips off his T-shirt. And I thought I was being coy with my question! Winston doesn’t have a ready comeback.

Winston also seems to have some sort of aversion to the very good-looking Asian boys who are on the verge of asking him to join their gay liberation pink triangle group. Indeed O’Connell’s film seems to be filled with all sorts of subtle racial prejudices. Winston is apparently so dumb that when a park-bench preacher offers to show him the way to find joy in the village, the new kid in town allows himself to be sucked into a Moonie indoctrination session.

Even when Winston meets Tom’s absolutely beautiful “special buddy,” Matt (Greg Lauren) who sits down next to him and puts his arm around him, the boy can’t figure it out. Why, wonders Matt has Winston just purchased new albums of Barbra Streisand and Bette Midler and no Judy Garland? Why is Winston reading D. H. Lawrence’s Lady Chatterley’s Lover instead of Henry David Thoreau’s Walden, Tom wonders. And surely even a guy from Podunk State would have at least heard of Judy Garland and read of Thoreau, if not having actually heard or read their works. 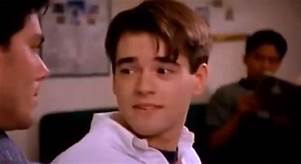 More confusingly, why is this young, very cute director, who probably made this movie for his NYU film degree, suggesting that entry into the gay world is dependent upon coded words and interests such as “Are you a friend of Dorothy’s?” I don’t know, maybe in the early 1990s things had changed from the New York I knew of the late 1960s when if you saw a good-looking guy and he looked back at you, you’d simply ask “My place or yours?” or least “You got some place to go?” And on occasion even the bathrooms weren’t that bad. And where did all the gay bars go? Julius’ was still nearby. And surely even Winston had heard of Stonewall, just a few blocks away from Washington Square.

Meanwhile, Winston does get up the nerve to clumsily trip over to Tom’s bed and reach out his had to gently stroke Dorothy’s friend before they fall passionately into active sex. Too bad Dorothy’s got to leave Oz the very next day, Tom having found a job and now required to give up his university dorm room.

Winston learns to swallow his pride and agrees to listen to a Garland record (after which I’m sure he’ll have to admit that as good as Streisand is, Garland is better) as he picks up a new boy in the record shop.

I’d laugh at all this, except that my young gay friend Felix once told me that he utterly adored Bernadette Peters but couldn’t bear Audra McDonald. Perhaps if I suddenly found myself young again I wouldn’t know the proper codes to find somehow with whom I might go to bed. But then perhaps I’ve always just been less choosy than Winston and my friend Felix appear to have been. Certainly, I had a lot of fun. But then....

Posted by greenintegerblog at 8:37 AM