dancing the blues away

Although Robert Lee King’s half-hour long film The Disco Years disguises itself through its title, the film’s introductory voice over about the dance craze of the late 1970s and it’s final clumsy disco dancing, this gay “coming out” film is really about homophobia, a far more important sub-genre in LGBTQ film-making than is dance—although there are several important gay, lesbian, and transgender films that focus on the latter.

The young soon-to-be out gay boy in this film, Tom (Matt Nolan) does indeed suffer the stings of the homophobic reactions of his fellow students and even his doting mother, but the real victim in this work is the English schoolteacher Mr. Reese (the adult actor Dennis Christopher, not nearly as cute and charming as he was in an earlier 1979 coming of age film—although not gay oriented— Breaking Away). Yet the film does not focus on him and gives us little evidence for his later actions since it presents his character almost as the stereotype of an immediately recognizable gay man who even as he introduces himself to his class leads one female student Denise (Robin Stapler) to quip “Looks like we’ll be reading a lot of Walt Whitman.” This in an English composition class. 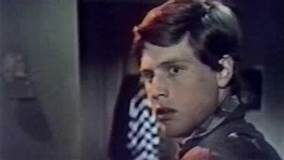 The real focus is on the character of Tom, obviously a version of director’s younger self. Tom’s major problem seems to be that he looks and acts straight in a world that basically protects him for his impersonation, while utter frustrating him in his attempts at self-identification and, of course, in finding someone with whom he might—let’s put it bluntly since most “coming of age” films describe it as love—have sex. Honestly, although many a high school romance has ended in marriage, most 16 and 17 years old are really seeking someone with whom to relieve their hormonal tensions. For Tom the only available gay peer is the highly effeminate and outrageously “out” Teddie (Robb Willoughby), the kind of nelly gay boy that many young homosexual boys fear, as Tom does, that they will become—as if some fairy godmother held a magic wand over their heads in readiness—the minute they declare their sexuality. My husband Howard has long asserted that he shared that very fear as a 17-year old. Fortunately, in King’s version of this phenomena, the hero sort of envies this queen for his openness and by the end of the film invites him to dance.

Yet there is always in any high school a beautiful jock lurking in the locker room just waiting to find the right boy to rub up against. In fact, the high school gay athletic hero having sex with shyer intellectually-inclined gay boys might almost be yet another sub-genre to the “coming of age/coming out” movies. My weather bell model, Get Real (1999) features just such a figure, as does John Butler’s 2016 film Handsome Devil. As I’ve written elsewhere, when I was a 15- or 16-year-old I might have had sex with the gorgeous captain of my hometown football team if only I’d been more a bit more mature and ready for the experience. Certainly, I wanted it and kick myself to this day for having jumped out of the car when he took out a cigarette. 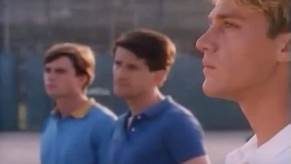 In Tom’s case it’s the beautiful fellow tennis player, Matt (Russell Scott Lewis). The two began playing matches which turn quickly into a camaraderie that ends up with them playing the kind of “touching games”—arms around the shoulder, mock wrestling bouts, and head-butting drinks from the water fountain—that ends up one night in a neighbor’s swimming pool where they play a kind of strip-tease game with one another before jumping in naked to swim their way into each other’s arms and lips.

But King’s film, as I have already suggested, is no simple rom-com. The day “after” often ends in convenient amnesia for the jock and a well of loneliness for his nighttime friend. Matt, like so many others, has a girlfriend by the next morning and quickly develops into a homophobe to hide his true sexual proclivities from himself and his friends. Tom is too nice of a kid to “out” his one-night stand to the others, and besides they might not believe him and, as they ultimately do, turn their homophobic rage upon the truth-teller. Moreover, to do so Tom would be outing himself, something which he apparently is not quite ready to, even if he has been trying out in the local bowling alley bathroom and has momentarily stood at the front door of the local gay dancing club. Certainly Teddie sees through Matt’s bluff, responding to his taunts, “You know what they say about people who live in glass houses.”

Tom remains silent as they sport their homophobia by decorating Reese’s classroom with the usual chalkboard slurs of “fag” and pasted up pictures of naked gay porno models. Which of them, one wonders, purchased the magazine from which the photos were lifted? Or did he already have them hidden under his mattress? It’s common knowledge that the most homophobic of beings are those who are most trying to deflect attention, but in this case it appears the girls are far less tolerant about gays than the boys. Are they afraid of being of losing their power over their boyfriends, terrified of their own loss of sexual prowess?

What also truly surprises one in this otherwise typical portrayal of high school bullying is that the teacher is almost immediately ready to pack up everything and transfer to a less volatile school. Throughout, this film hints at the spirit of the times, with TV footage of California State politician John Briggs speaking for State Proposition 6 which would have prevented gays or those who supported gay rights from working in the public schools.

Shortly after the classroom desecration, Tom visits his teacher, who is packing up to leave, asking him why he has become so easily intimidated. Reese explains that he knows all too easily to where this will lead, the kids reporting his homosexuality to their parents, the parents putting pressure of school authorities, and from there on having school administrators watching over his shoulders. Tom attempts to change his decision, suggesting he find out who committed the act. But Reese argues that’s not really important since the inevitable series of events has already begun to unfold. When Tom argues that it’s “unfair,” his beloved teacher snaps back, “Life is unfair...you better get used to it.”

Suddenly Tom’s concern has been converted into his own personal involvement, and he is startled by the implications, quickly responding “I’m not like you,” presumably a denial of his being gay. Reese gently puts the matter to rest by denying his statement had suggested anything about shared values.

When Tom returns to the klatch of perpetrators he tells them that he has seen what they did to the room, asking them “Why didn’t you invite me?” as if, for a moment, he too has become determined to hide behind homophobia. Yet you can see he is troubled by the event, and the camera follows him as he wanders about the campus in a moral quandary.

By the time he returns home we realize, through the phone calls his mother has been receiving calling her son a “faggot,” that he has reported them to the authorities as Reese should have done. He has acted, and in so doing has “come out” not because of a crush on another guy but because of his moral convictions, because of the “unfairness” of it all.

His mother’s reaction is even more disconcerting than his schoolmates’ cruel derisions. Throughout the film Tom’s divorced mother (Gwen Welles) has seemed like a kind of caring, open-minded, and even free-wheeling—she insists that Tom take disco lessons with her at the studio where she used to teach hula dancing—woman. But having received those calls, she meets her returning son with near desperation for an answer to the epithets hurled at her over the phone. Tom admits that he is indeed a faggot, that he is gay, explaining to her how he first met his swimmer friend and had sex with him (“It was so wonderful.”) and reporting what happened after. She refuses to believe that son is a homosexual, and even suggests that if Matt was gay and now has a girlfriend then perhaps Tom can also become straight—hinting even of the possibility of conversion therapy.

Tom pleads with her, “Mom, I can handle being gay. I’m just tired of having to hide it all this time.” But she still cannot accept the fact. When the phone again rings she answers it, shouting out “My son is not gay.”

It is her reaction finally that drives Tom out of his own home. For the first time he bravely enters the gay bar, named Oddity, not only being delighted with a room of people who might accept him for who he is, but upon encountering the school outsider Teddie, asking him to join him, finally having the opportunity to put his new-found dance skills to use. 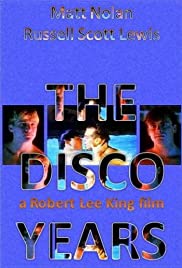 Too bad King and his crew couldn’t afford a better foley man to fill in the sounds of the disco dancers, which in this rather charming little film sound more like clomping feet rather than fevered hoofers. No matter, as the narrator explains in the final voice over “In time the world of gay dance clubs proved to be a trap of its own,” but in 1978 and for a few years after it was like heaven, where you could meet up with other guys and have sex without the fear of dying. I should imagine that eventually even his mother, Melissa, will get over her worries for her son—after all she had found their obviously gay disco teacher to be “fabulous”—and join her son from time to time at the local club.

Posted by greenintegerblog at 9:33 AM