throwing him to the rats

Alfred Hitchcock’s fifth movie, the silent film of 1927 Downhill, strangely enough is one of his best. I characterize this as somewhat “odd” simply because several later films, far better known and admired by his audiences, are simply not as innovative and cinematically brilliant as this early work.

The story, based on a play by the film’s star, the beautiful Ivor Novello and Constance Collier under the shared alias David L’Estrange, is far less important than Hitchcock’s cinematic telling of it.

Roddy Berwick (Novello), his school’s star Rugby player, has a flirtatious relationship with a local waitress, Mabel (Annette Benson). On one such visit Roddy brings along his school friend, Tim Wakely (Robin Irvine) who takes the relationship with Mabel much further than the dances Roddy engages her in; and soon after the boys are called into the office of the school’s head, where Mabel sits, explaining that she is pregnant and that the father is Roddy, a lie told, in part, because she suspects she can get more financial support from Roddy’s wealthier parents. Tim must get a scholarship if he is to go to Oxford. 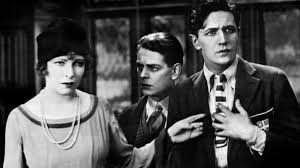 Roddy accordingly takes the blame, although he knows the truth, and is not only ousted from his school but his family as well.

As the title suggests, the rest of this film portrays his “downhill” progress, as he works, first in Paris as a bit actor, marries one of the major actresses of the day Julia Fotheringale (Isabel Jeans), suddenly receives a financial windfall from a relative, and loses it through Julia’s extravagant spending. She has also continued her affair with her former sleazy boyfriend, matinee star Archie (Ian Hunger). 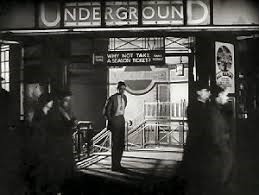 Psychologically broken and mentally and physically ill, Roddy ends up in a Marseilles fleabag hotel room, pitied by sailors who agree to “throw him to the rats,” which, in this case, means shipping him back home.

In the interim, his parents have discovered the truth, and have been desperately searching for him; so all ends well.

But the director tells another story, tinting his images in sickly colors of pea-green, yellow, brown and blue to help us perceive the nauseous journey that our hero must undergo. More
importantly, Hitchcock, particularly in the later nightmare scenes, overlays images, focusing on machine parts and other mechanical devices that might make even Fritz Lang envious, creating a generally vertiginous sense of reality that he would not return to until the middle of his career with Vertigo and North by Northwest. 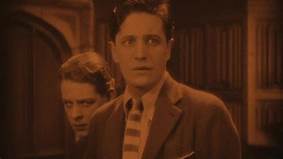 Finally, the casting of pretty gay-boy Novello as the hero is brilliant because, just as in The Lodger of the same year, it makes the audience totally sympathetic with a character who otherwise might simply be seen as a spoiled schoolboy, or in the other film as a dangerous murderer. Here he becomes a tortured beauty from whom we hardly can pull away our eyes. Hitchcock was brilliant in this, often using handsome gay actors—Montgomery Clift, Cary Grant, Farley Granger, and Anthony Perkins to name only a few. One might argue that by using gays as potential or actual villains the great director was simply playing into the prejudices of the day; but I’d argue that he chose these beautiful figures in order to challenge and make us question our easy assumptions.

And the many subtle homosexual relationships that Hitchcock concocted in his films help also to force us to query out assumptions. Are Roddy and Tim, in Downhill, more than simply “friends,” and mightn't that help explain why Roddy allows himself to become the guilty figure; he is later betrayed yet again by his wife, so clearly he is clearly a weak man who, nonetheless, attracts all those around him. 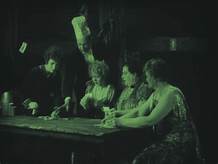 Betrayal is, in fact, the common theme of this work. To the outsider Roddy has betrayed his school, his sport, and his family; but in truth, he is betrayed by his best friend, his school, a local girl, his parents, and his theater-star wife. Even though the Marseilles sailors ultimately save him, they too are ready to send him on his way to whatever fate might be await him, or, in short, to “throw him to the rats.”

And given those facts, the tale is not a happy one, despite its restoration of the hero by the film’s end to familial status. But it is already too late in Roddy’s now ruined life to allow him to return to normalcy. If he wasn’t originally “queer,” the director suggests, he is now a permanent outsider. As in so very many of Hitchcock’s works, life after accusation, mistaken identity, inexplicable assault, or, especially, actual criminal involvement, can never be the same. In film after film, Hitchcock presents us with figures whose lives are forever altered by accident, chance, or simply involvement with the wrong people at the right time. And it is almost always a journey, by train, plane, or simply through the courts and conscience to a world from which you can never truly return and to which you live in horror of going back.

Like a “downhill” skier, the good-looking kid of Hitchcock’s 1927 masterwork will probably never be able to be lifted to the top of the mountain again.