in and out: taylor mead’s ass

By this time, Andy Warhol had certainly taken a great criticism for his films, but perhaps this was the final straw for him, particularly since no one that Mead or Warhol knew had ever bothered to film Taylor’s ass. Mead responded: “"Re. Peter Goldman's letter in The Voice, Andy Warhol and I have searched the archives of the Warhol colossus and find no 'two hour film of Taylor Mead's ass.' We are rectifying this undersight with the unlimited resources at our command. Love and kisses."

And soon Warhol produced a 76 minute-paen to and titled Taylor Mead’s Ass.

(The first photo below is Andy Warhol filming Taylor Mead, and the second shows Warhol with Gerard Malanga and Mead leaning against the shooting scrim.) 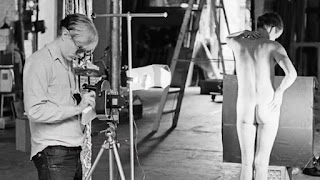 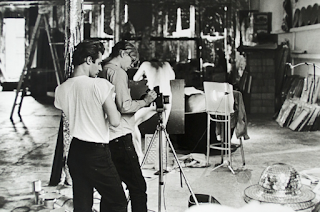 That film, although much talked about, is now difficult to see for ordinary individuals unable to go to the Museum of Modern Art to view it as a researcher or to trek to The Andy Warhol Museum in Pittsburgh, which I presume also owns a copy. But I will attempt to stitch it together with what Brandon Judel described of the MOMA showing after Mead’s death in July 2013 and my own viewing of 11:33 minutes which exists on the internet on Vimeo. If I do have the opportunity  someday to see the entire one hour and 16 minutes, I shall immediately post an addendum.

Perhaps it is best to begin with a quote by critic Wayne Koestenbaum, who in Art Forum summarized the film as "seventy-six seriocomic minutes of this poet/actor's buttocks absorbing light, attention, debris.” In his Andy Warhol: A Biography (New York: Open Road Media, 2015) Koestenbaum extends his description of the film to read: "Staring at his cleft moon for 76 minutes, I begin to understand its abstractions: high-contrast lighting conscripts the ass into being a figure for whiteness itself, particularly when the ass merges with the blank leader at each reel's end. The buttocks, seen in isolation, seem explicitly double: two cheeks, divided in the centre by a dark line. The bottom's double structure recalls Andy's two-paneled paintings . . . ."

In Culture Catch Brandon Judell describes what appear to be the earliest segments of Warhol’s film viewed in MOMA’s Sculpture Garden in 2013, although suggesting that he’s describing it to its very end:

“There's no soundtrack (except for the site-specific whoosh of the MoMA's fountains and the whirr of Big Apple traffic on 53rd and 54th streets). The 16mm visuals are a lush black and white. As for the lead: a derriere that at times almost looks as if it's carved out of marble, and certainly out-acts many a modern starlet.

Then Mead starts fluttering his hands before scratching his ass cheeks.

At this moment, a museum guard walking by looks at the screen, then looks at the intermittently enthralled audience, and shakes his head.

Shortly, the projector's reels get stuck, and the celluloid vision of Mead's rear starts burning up. The audience gets excited, but the problem is fixed, and the film continues.

Finally the film ends. Those who remain, which are most, offer heartfelt applause. But is this film just a jokey response to a glib note in a weekly rag, or an incisive commentary on the intellectual state of America in the '60s?” 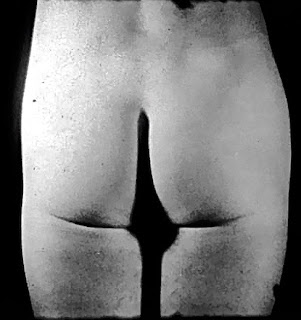 The 11:33 second segment I watched on Vimeo appears to be closer to the end. Despite Judell’s comment that the film had no soundtrack, the section I saw quite clearly features classical music playing on the New York radio station WKCR, ending when Rachmaninoff’s Concerto for Piano comes to an end and the broadcaster begins to describe other works about to be performed. However, given the mention of smartphone apps and HD recordings at the end of the song, we can only presume this was recorded over the original movie.

Throughout, Mead flexes, wiggles, and shakes his still firm fanny (in particularly good shape for a man of 41) with a frenzy that might make a stripper or pole- dancer envious.

This portion begins with Mead pulling a metal attachment hooked up to old-fashioned vacuum cleaner through the cleavage of his butt, at one point sitting upon the cannister of the cleaner as if he were attempting to ride it like a horse. The cleaning attachment is also slowly pulled under his butt, before he briefly attempts to brush his ass off with a duster. In short, he begins with several images that suggest cleanliness and good hygiene as if to argue “My ass is not filthy thing.”

After a series of jiggling his buttocks back and forth in an utterly fascinating abstract vision of a dancing ‘arse, Mead suddenly pulls out a larger New York City “No Jaywalking” sign, posting it’s warning to those who might not cross at the corners the entry from the place they now inhabit is illegal, obviously a joke about regulations concerning what he might be further permitted to insert in his ass, no matter how excited by his enticing gestures one might become.

No matter, he spends a great deal of the rest of this section of the film using a small pliers to remove numerous objects similar to what Judell reported have been previously inserted. These include a plastic spoon, a pencil, an empty Frito bag, books—Henri Bergson’s The Two Sources of Morality and Religion and (presumably Pater’s, although it might be Will Bryant’s) The Renaissance—along with a program from the First New York Film Festival, a monogrph of Mead himself, a full female torso, and that picture of Elizabeth Taylor and Richard Burton that Judell reports his having previously inserted. Although we can obviously see Mead feeding these objects through his legs before he pulls them from his butt with the pliers, it is successful drama in the manner of Japanese Kabuki theater: we believe through the gestures if not through the truth our of vision.

Soon Mead briefly covers his ass with a toilet seat, and after dancing a large role of duct tape before his ass, suggests that he is soon to tape everything shut.

And, indeed, after a few more wriggles and wags, the sequence comes to an end soon when the broadcaster announces the performance’s closure.

In the end, I don’t know if I’d be interested in an entire hour and 16 minutes of Mead’s ass, but I certainly did enjoy it in my smaller encounter.

Posted by greenintegerblog at 6:14 AM