The three and a half minute short Lipstick was Arthur Gay’s 2019 offering for his graduation from the Deutsche Film- und Feernsehakademie (German Film and Television Academy) in Berlin.

In this miniature-sized work hardly anything happens, yet numerous LGBTQ films might be created about it complications. A young child (Matapia Rihari Oneroa) sits in his room, obviously bored, using a penknife to scratch his initials into the windowsill from where he views his delimited world in front of the house in which lives. In the process he cuts, either accidentally or intentionally, his palm.

At that very moment a car drives up and a man (Rainton Reuben Oneroa), evidently his older brother (in real life as well), and a young woman (Tasman Vance) get out. She pauses for a moment to apply her lipstick as she stares at her reflection in the car window. 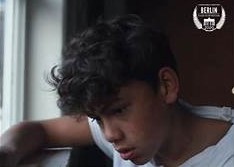 The boy yells out, “Who’s see?” as the brother quickly dismisses his inquisitive brother’s shout out with the words, “Mind your own business.”

In the next shot we see the boy washing his hand from which lipstick-red blood is oozing out of the place where he has jabbed himself. As he finishes he hears noises in his brother’s room and as he moves back to his own room, he pauses to peer into the slightly open door where we observe his brother and his date kissing, fully clothed, upon the bed. He stares with wonderment at their love-making, but as the door creaks open a bit a further, the woman observes him, pointing out his presence to her lover, who quickly jumps up, shouting “What the fuck...?” and slams the door shut. The boy quickly retreats to his own room again.

In the long last scene, we observe the boy rifling through the woman’s purse before finally withdrawing her tube of lipstick. (The sound effects in this scene, as we hear his fingers exploring each item within the purse, are memorable). Taking it to the bathroom, the child carefully applies the lipstick to his own lips, properly pursing his lips as he has probably seen women do in the past.

Unknown to him it is a forbidden act for a male in what is obviously a painfully macho house. Yet his reasons for having committed this “unforgiveable act” are clearly totally innocent, emanating from simple curiosity—if curiosity can ever be described as “simple.” For the act also signifies a desire for his brother’s love, which evidently is seldom proffered in this house. If the application of lipstick can draw his brother into the kisses he has just observed, perhaps he might be able to elicit the same response.

But then this moment of curiosity also hints at so many other possibilities. Will the boy increasingly associate love only through becoming the feminine object of the male gaze. Might he gradually develop the belief that he too would be more loved if he were a woman. The film posits a psychological possibility to what we realize is probably inborn, a genetic disposition. But in this innocent moment, we perceive an entire world of future desires, fears, and frustrations which this child may have to face.

Almost before he has put the lipstick to his lips we watch him forced from his boring paradise, shoved into a fallen world of wonderment and horror. In short, this little piece speaks volumes in its few simple frames.

Incidentally, as a young man Werner Rainer Fassbinder applied to the prestigious DFFB, but was rejected.

Posted by greenintegerblog at 4:39 AM